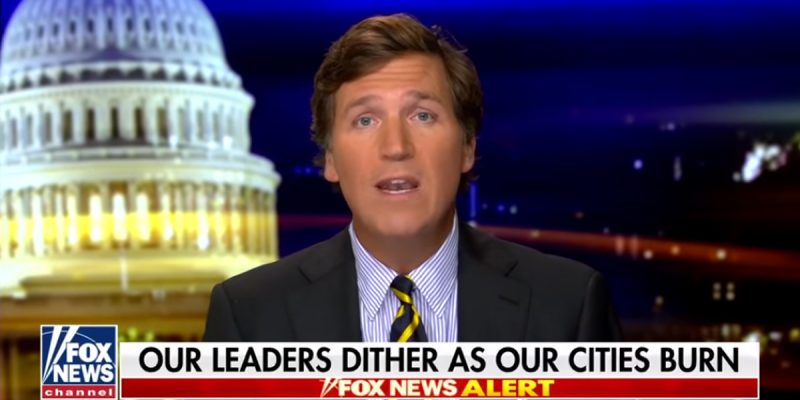 That Tucker Carlson gives good monologue is something most Americans already know. In the time he’s been on Fox News as an evening host he’s established himself as an outstanding purveyor of anti-doctrinaire conservative thought. Carlson departs from conservative orthodoxy a good bit, which infuriates a not-small number of establishment types, and he’s utterly fearless in defense of his opinions. Sometimes Carlson gets accused of wandering into wing-nut territory, which is impossible not to do if you’re going to run an interesting show for an hour a day five days a week, but when he does so he’s usually quite grounded in his opinions and even if he’s wrong he’s at least interesting.

There was no wing-nuttery in last night’s monologue. Instead, it was a full-scale, take-no-prisoners fire and brimstone assault on the American political class in the wake of a week-long violent disgrace playing out on streets all over the country following the killing of George Floyd in Minneapolis. Virtually no one was spared Carlson’s wrath, which represents the view, we would wager, of most Americans. Not the hoodlums in the streets, not the cops, not mayors, not governors and not even the president. Carlson especially lays into President Trump’s son-in-law Jared Kushner, who he says has been giving Trump terrible advice on race and crime and other issues.

The monologue went on for more than half the show and it was brilliantly presented. This clip, commercials edited out, is 26 minutes. It is some of the best political TV you will ever watch, and it ought to make you want to ask very rude questions of your political leaders about why they’ve allowed the country to devolve into such chaos.

Of course it comes at the question from a conservative perspective, but Carlson doesn’t spare the conservative establishment by any means for his central indictment – which is that American leadership has been shown to be disgustingly weak and hollow of principle.

For a bit more on the subject of our newfound street violence, I’ll offer my latest American Spectator column which posted last night.

Interested in more national news? We've got you covered! See More National News
Previous Article Miraculously, People Are Waking Up to the Real Enemy, and We May Have COVID to Thank for That
Next Article Polk County Florida sheriff has an epic message for looters [video]