Yes, this is a response to the awful 4th of July tweet Kaepernick vomited forth in his latest attempt to stay relevant as part of our new anti-American revolutionary moment. 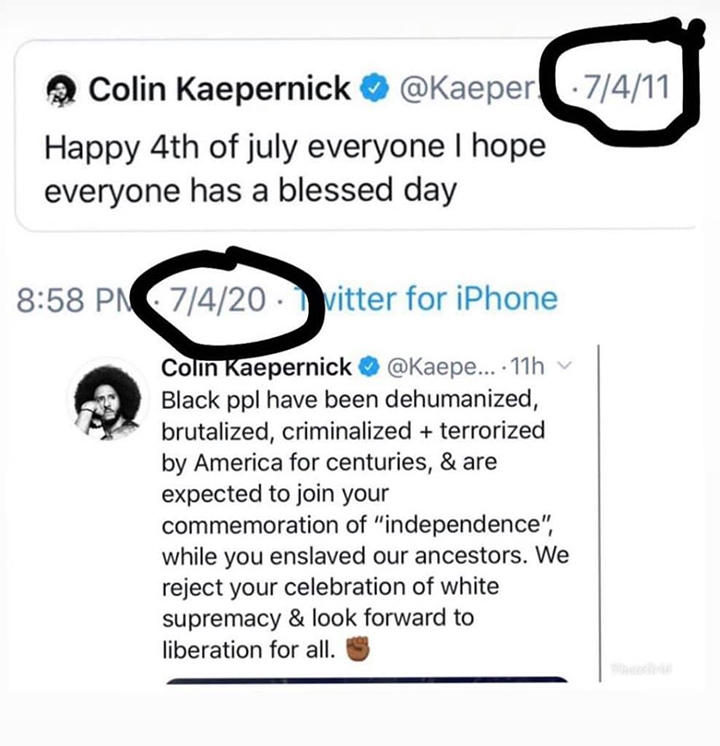 “Hope everyone had a happy 4th! Colin @Kaepernick7 sure did back in 2011, before he realized that if he grew an afro and played the part of victim, he could scam the black community out of millions.

Those were the days!”

Most of our readers know the story behind Kaepernick’s conversion from all-American quarterback with a promising NFL career to…whatever it is he’s trying to be now. It had a lot to do with Nessa Diab, his Egyptian-born hip-hop DJ and minor TV personality girlfriend, who absolutely poisoned him against his country and the adoptive white parents who raised him.

The leftist activism she filled his head with tubed his football career, so much so that in the final year of his stint with the San Francisco 49ers four years ago Kaepernick led his team to a 2-14 record, becoming better known for kneeling while the National Anthem was playing than anything he did on the field. Since then he’s done three things. He’s hawked Nike products, something which has been so successful that the company took a bath to the tune of a $790 million second-quarter loss. He’s trashed the NFL for the fact no team has signed him since he washed out with San Francisco.

And he’s done everything he could to prevent anybody in the NFL from signing him. Which is what the anti-American 4th of July message was about.

Remember, Kaepernick has flirted with a few teams here and there but there was always something which blew up a signing.

There was the 2017 mess with the Baltimore Ravens, wherein the team was about to bring Kaepernick in as insurance against the injury status of starting quarterback Joe Flacco and right before it happened Diab put out a tweet equating legendary Ravens linebacker Ray Lewis to a slave for team owner Steve Biscotti. That was the end of Baltimore signing Kaepernick.

Then there was his flirtation with the Denver Broncos, who actually offered him a contract. He turned it down before suing the NFL for allegedly colluding against him.

Then last year there was the NFL workout that was scheduled in November, before Kaepernick and his team objected to standard hold-harmless and waiver language and blew things up.

Now this year there was NFL commissioner Roger Goodell, who can’t stop falling all over himself in an effort to show how “woke” the league is while pandering to the Malcolm Jenkinses of the world. Goodell apologized for the league not sufficiently kissing Black Lives Matter’s asses over the kneeling issue – as though somehow the players trashing game attendance and TV ratings by pissing off half or more of the fans was Goodell’s fault – and then “encouraged” somebody to sign Kaepernick.

So now the football media is full of speculation as to which team will sign him. Will it be the Chargers? The Seahawks? Jacksonville? New England? Houston? We’re told that the NFL has come around full circle on the kneeling issue, which seems clearly true given what happened to Drew Brees.

So what happens? Kaepernick goes out and calls the Fourth of July a “celebration of white supremacy,” and makes himself twice as toxic as he’s ever been, and puts every NFL fan base on pins and needles that they’ll have to revolt against their team if it signs him.

Anybody who isn’t a mental defective, and even some mental defectives, would easily understand that trashing America like that is a sure way to avoid catching a contract. Even if the fans have come around a little on the kneeling issue it’s a very small number of NFL ticketholders who will be on board with raw anti-Americanism like that and anybody who signs Kaepernick would face a fan revolt.

Everybody knows this, though nobody in the league will have the balls to say it. All you really have to do is look at what he’s done to Nike and conclude that since the NFL is a business it can’t afford this guy. He’s been out of football for four years and he was terrible when he was last in it, so he’s certainly not going to get a contract as a starter – and who needs a backup quarterback who thinks the 4th of July is a white supremacist holiday and keeps publicly saying so?

There’s an obvious conclusion here, which is that Kaepernick’s latest foray into anti-Americanism is aimed at running away from an NFL contract rather than getting one. He’s gaslighting and trolling the league, using the stupidity and animus of the mainstream media against the sports-fan public to make himself the put-upon victim punished for exercising his First Amendment rights.

And in the likely event no team will touch Kaepernick now, he’ll find some other stupid “woke” corporate marketer who’ll pay him top dollar to promote himself in association with their products. It didn’t work for Nike, but the advertising world isn’t made up of the fastest learners, so there will be another sucker born in a minute for him to exploit.

And he won’t get hit doing commercial endorsements. He isn’t likely to blow a knee that way. He doesn’t even have to stay in shape. All he has to do is keep tweeting anti-American bilge and getting attention he can’t get on the field, and the endorsement dollars will come.

If you’re sick of this crass, bad-faith manipulation you’re not alone. Just recognize that it won’t last forever. We’re far beyond 15 minutes of Kaepernick’s fame, and when it’s no longer even plausible he’d be signed by an NFL team nobody will care what this wire-headed fool says on his Twitter.

Interested in more national news? We've got you covered! See More National News
Previous Article ALEXANDER: The Revolutionaries Seeking To Burn Down America
Next Article MARSH MAN MASSON: Rat-L-Trap Challenge: What Can We Catch In The Marsh?