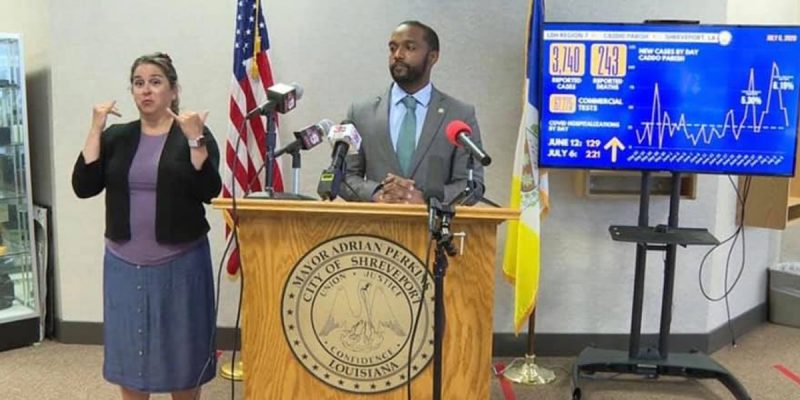 We said this was coming, and now it’s here. Yesterday Adrian Perkins, the ethically-challenged Democrat mayor of North Louisiana’s largest city, joined in with other local pols in the state’s bigger cities in a mask mandate in public places.

Shreveport’s mayor ordered Monday that mask will be worn in public while entering businesses beginning Wednesday.

“We have to react to these numbers,” Perkins said.

He said the mask order is for the protection of family members, employees and just being considerate for others.

SporTran officials also said Monday mask will be required at all bus stops, facilities and onboard vehicles beginning Wednesday.

A Caddo Parish commissioner attempted to add a mask mandate to Monday’s work session for discussion but backed off after several commissioners said they had not had time to read the proposal that would have been a late add-on to the agenda. Instead, the commission voted to hold a special session at 12:30 p.m. Wednesday to talk about it.

And of course, Perkins wasn’t wearing a mask when he announced his mask mandate. Because of course he wasn’t.

This comes on the heels of last week’s mask-mandate announcements in Jefferson and East Baton Rouge. None of these are particularly constitutional, nor are they all that prudent given the numbers.

Last week, Gov. John Bel Edwards revealed that while the state had set a goal to perform 200,000 COVID-19 tests for the month of June Louisiana actually performed 385,000 of those tests. And in the Baton Rouge area alone they’re ramping up the capacity to do 5,000 tests per day with the federal government paying for it. That’s just in Baton Rouge, mind you. which isn’t even 20 percent of the state and they want to do 150,000 tests a month.

How many cases do you think that’s going to generate?

We’re getting alarming reports about two thousand cases a day in Louisiana. Well, of course you’re getting those numbers. When you’re doing 10,000, 15,000, 20,000 tests per day it’s entirely likely you’ll generate those kinds of case counts.

Louisiana is up to 964 people in the hospital counted as COVID hospitalizations as of Monday, with 1,100 new cases.

How many deaths statewide? As of Monday’s release, eight.

Which is not a very large number. It’s a pretty insignificant number compared to the number of cases the state is reporting. 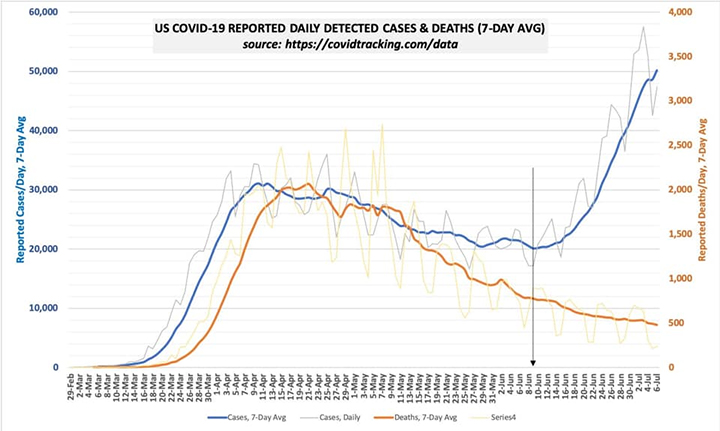 Hewitt offered this commentary, which is correct…

Should we be panicking about the “surges” in cases? Not according to the data. While the huge increases in testing has revealed more cases, it has not led to a significant increase in deaths.

The CDC estimates mean time from symptom onset to death of ~14 days. Still no observable deaths curve inflection, despite the sharp increase in cases now nearly 4 weeks ago.

The key has always been to protect the elderly and not about locking down the general population.

It is the natural history of respiratory viruses to spread with passage of time. No amount of lockdown/ social distancing gets it to zero.

The best indicator of effective public health efforts is mortality, which correlates with infection rates in the most vulnerable populations.

He’s looking at national numbers rather than Louisiana, but the same trend persists. COVID-19 is receding as a threat to life in Louisiana, and what the giant ramp-up in testing is revealing is that the virus is fairly prevalent in the state’s population, which has been true for a long time and has always been unavoidable.

It’s a coronavirus. Everybody is going to get it sooner or later. Now that enough testing is being done to get a real sample of the population we’re starting to see that, and to see that the vast majority of the people who do get it, particularly if they’re not beset with other medical conditions which make them unhealthy before the virus comes along, don’t suffer any really serious effects.

So what do you do with that information? Why, you try to shut down high school sports in Louisiana this fall.

Wait, what? No, you read that correctly.

Fields wrote to the Board of Elementary and Secondary Education and the Louisiana School Boards Association.

Fields urged for the suspension of all athletic activities that involve in-person participation by students in a group setting for the upcoming fall semester, including conditioning, practice, team meetings, and games.

Fields called for a rule suspending all athletic activities for the fall semester at an upcoming BESE meeting, set for July 14.

“Currently, BESE does not have a rule in place to protect our student athletes,” Fields said in a statement. “I’m asking them to step up and take action to protect our children.”

Which he proved pretty conclusively by attacking a staple of Louisiana culture and attempting to make lots of people miserable until after the election in November.

Take of that what you want. But it seems awfully clear that Democrats and RINO’s in Louisiana are following the national party playbook in an effort to sap the morale of the state’s people with weaponized COVID hysteria, warranted or not.

Interested in more news from Louisiana? We've got you covered! See More Louisiana News
Previous Article MARSH MAN MASSON: Rat-L-Trap Challenge: What Can We Catch In The Marsh?
Next Article BATISTE: The Rewriters Of New Orleans History