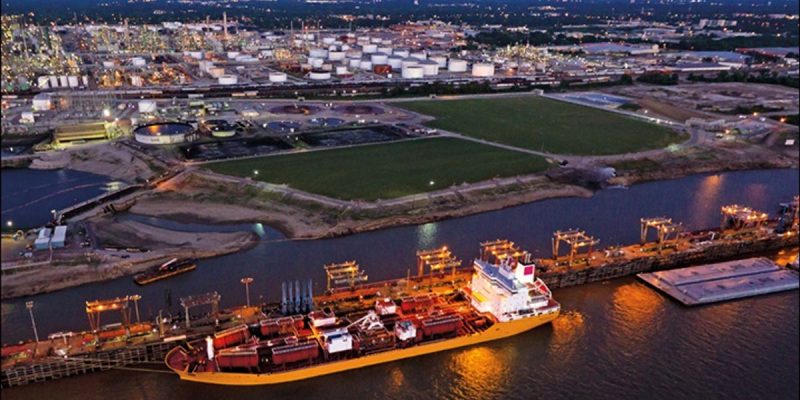 I’ll begin this explanation of why Gov. John Bel Edwards’ latest effort at destroying what’s left of Louisiana’s economy by telling a story that regular Hayride readers might be interested in; namely, how this site began in the first place.

Some of you might know this, but before I started The Hayride in late 2009 I had a job as a recruiter/corporate headhunter for a staffing company. I was specializing in two professions: engineers and construction managers.

Doing that kind of work in Baton Rouge meant I was heavily tied to the petrochemical industry.

But the timing wasn’t great. Because in 2008, Obama became President and the Democrats controlled both the House and Senate, and the first item on their agenda, after spending a trillion dollars on a planned billed as an infrastructure campaign but was actually a bailout of bloated state and local governments, was an attempt to pass a “Cap And Trade” global-warming bill.

Cap and Trade didn’t pass, but the fact it had enough momentum to be plausible sent some pretty major shock waves through the petrochemical industry, and especially in South Louisiana.

It worked like this: the owners of a lot of the big chemical plants along the Mississippi between Baton Rouge and New Orleans, which usually spend $25-50 million per year on various maintenance and upgrade projects and in so doing sustain a whole ecosystem of industrial contractors, engineering firms and the like when they’re not planning major upgrades which can run into the billions and make all those folks rich, looked at what Congress was doing and re-examined everything about their operations.

The left-wing spin doctors and legacy media types in the state kept singing the praises of Cap and Trade, saying “This will be great for our economy, because it’ll force ExxonMobil and Dow and BASF and the rest to spend a bunch of money installing equipment to scrub their emissions, and so on, and the contractors and engineering firms will get a windfall.”

And they were clueless.

Because what actually happened was that at corporate headquarters at Dow and ExxonMobil and Shell and BASF and the rest of the companies operating plants in Louisiana, the suits sat down and decided “If this crazy legislation passes in Congress, we’re packing up our facilities stateside and we’re moving the whole thing to Brazil or India or Bulgaria or Vietnam. Anywhere but America where Obama and Pelosi expect us to pay half our revenue in global warming taxes.”

So the plans for all those maintenance and upgrade projects at those plants along the river in South Louisiana simply evaporated. The plants went into a holding pattern; they weren’t going to spend money on facilities they might be abandoning.

And when that happened, the calls went out to the industrial contractors and engineering firms that they had no projects to bid on.

And when that happened, the scene at, for example, Jacobs Engineering was a lot like the one in Monty Python’s The Meaning of Life when Michael Palin comes home to a Catholic house full of dozens of kids and says “The mill’s closed, there’s no work for anyone. I’ve no choice but to sell you all for scientific experiments.”

There were bloodbaths at all the engineering firms. One of them I did business with went from nearly 300 engineers on staff down to 50 in the space of a week because the firm had no projects to bid on and no prospect of having any. Several of them ended up merging in order to survive the downturn.

In no time flat I had a giant pile of resumes on my desk with no jobs to try to place their owners in. I was calling chemical engineers and asking them “Do you want to go work in Kuwait?” and getting the response that “I’m 57 years old and I have season tickets on the 35 in Tiger Stadium. I’m not going to Kuwait. Call me when you have something better.”

And at that point I came to the realization that for the foreseeable future I wasn’t going to make any money at that job, and that politics was the reason. Seeing as though I’d already been in publishing and liked it (though I really didn’t like dealing with printers or the Post Office), and seeing as though Louisiana had a distinct deficit of conservative media, I decided to start The Hayride – first as a side business and not long after as a main occupation.

I relate that story because when I saw John Bel Edwards’ insane executive order creating a global warming task force which purports to slash “greenhouse gas emissions” by 100 percent in the next 30 years, I felt like it was 2009 all over again.

The Climate Initiatives Task Force consists of representatives from the scientific community, state government and private sector. Their charge is to develop strategies for curtailing Louisiana’s greenhouse gas emissions in a manner that fully recognizes the state’s extreme climate vulnerabilities as well as the characteristics of its energy-intensive economy. Emissions reduction goals set for the Task Force include cuts of net greenhouse gas emissions by 26% to 28% by 2025, 40% to 50% by 2030, and 100% by 2050.

There are two reasons why this is a direct assault on the state’s economy – and remember, Louisiana’s economy is completely moribund at this point to begin with. Louisiana’s 1st quarter GDP number was negative 6.6 percent, one of the worst in the country, and in case you want to blame that on COVID-19, just remember that there were only two weeks of economic shutdowns included in those three months. We were in dire straits before the virus showed up. In a month or so when the 2nd quarter number comes out, it might well be 15-20 percent in the red.

We’ve talked before about how UHaul rates renting trucks in Louisiana for dropoff in Texas go double what they are the opposite way, which is a telltale sign of a wave of outmigration.

Reason number one why this is an act of war against Louisiana’s economy is that more than half of “greenhouse gas” emissions in Louisiana emanate from our petrochemical industry. We’re one of very few states where that’s true. So to achieve the numbers Edwards is talking about means doing away with a whole bunch of those plants and the jobs they carry with them.

And no, don’t be bamboozled into the idea that Louisiana’s chemical industry can just operate more cleanly. They’ve already made far more strides in doing so than John Bel Edwards could ever dream of mandating. To wit…

The Consumer Energy Alliance late last week released its Louisiana Emissions Analysis, which found that emissions declined by 71 percent across the state since 1990. This sharp decrease is remarkable given that Louisiana’s Gross Domestic Product surged 177 percent over the same period. These reductions come as Louisiana is one of the nation’s largest crude oil and natural gas producing states, and one out of three Louisiana households relies on natural gas for home heating.

From 1990 to 2019, Louisiana’s emissions of key pollutants have decreased across the board, with a:

These numbers are noteworthy given that Louisiana’s total and per capita energy consumption is among the top three states in the nation, and more than 88 percent of the state’s energy needs are met by oil and natural gas.

With more than 300,000 Louisianans now suffering from unemployment and small businesses and manufacturers across the state reeling from the economic downturn, it is important to highlight the 291,200 jobs and more than $50.7 billion in economic impact that the energy industry has brought to the state. To view the analysis,  click here.

Those plants have already done more than Edwards could have reasonably asked them to do, and now he’s asking for an even more comprehensive re-imagining of their operations at a time when their industry is already in the throes of a deep economic recession.

And he’s asking for it when neighboring states are doing everything they can to attract industry. Does Edwards realize that Texas is across the Sabine River?

The second reason Louisiana’s economy can’t withstand these kinds of demands is that if Edwards can’t get those reductions from the petrochemical and oil and gas industries and he has to get them from the rest of the economy, you’re looking at a significant reduction in activity mandated by government. Trucking? Timber? Agriculture? How are you going to get a 28 percent reduction in carbon emissions in the next five years without killing jobs and businesses? None of those industries in Louisiana have the kind of capital it would take to re-equip to meet those targets, and John Bel Edwards doesn’t have the money to make them whole.

It’ll be a whole lot easier for these people to simply pick up and leave. Other than perhaps those UHaul rates will become so onerous that nobody will be able to afford them.

And don’t get fooled into thinking this will be some grand cooperative endeavor that Louisiana’s business community will be able to collaborate in. Here’s the makeup of Edwards’ little global warming task force, per his executive order… 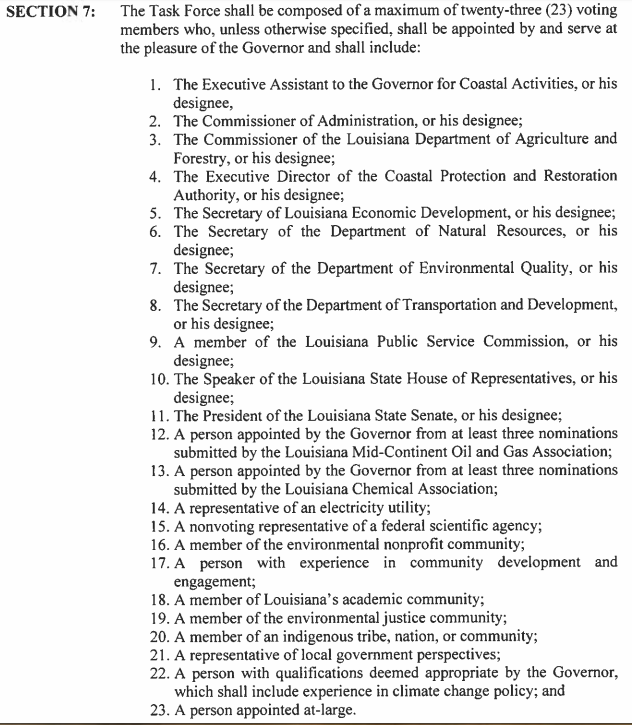 So the Chemical Association and LMOGA get seats at the table, even though they’re really being served on it. At most business and industry will get friendly voices in maybe 25 to 30 percent of those seats. It’s a slaughter.

Just issuing this order sends a signal that Louisiana’s closed to any new investment in oil and gas or the petrochemical industry. Or any other heavy industry, for that matter.

It also sends a signal, and this is what’s really going on, that John Bel Edwards is wide open to left-wing national money, because he’s going to be running against John Kennedy for the Senate in 2022. This is the kind of thing you do when, as the only Democrat governor in the Deep South, you just got snubbed for a speaking role at your party’s convention. Edwards wants to boost his profile so he can pull in Soros and Hollywood money and the like, and he wants to be treated a little better than the Fredo Corleone status he’s currently being given within his party nationally. So he’s playing this game at the expense of Louisiana’s people.

Is this the worst thing he’s done? No, but it’s pretty terrible. And the long-term implications of it for Louisiana’s economy are dire.

This is exactly what we warned would happen if he won. And the guy who has my old job will probably be in a little different situation, because he won’t be offering Kuwait to those engineers now. Instead it’ll be Baytown, Texas or Joplin, Missouri or Greeley, Colorado, and those engineers won’t be reticent in saying yes – because the competition isn’t the Middle East this time, it’s the rest of America.

Interested in more news from Louisiana? We've got you covered! See More Louisiana News
Previous Article North Carolina has 5th-highest share of military personnel among the 50 states
Next Article SADOW: Shreveport Surrenders On Tax Hikes At A Bad Time For Perkins