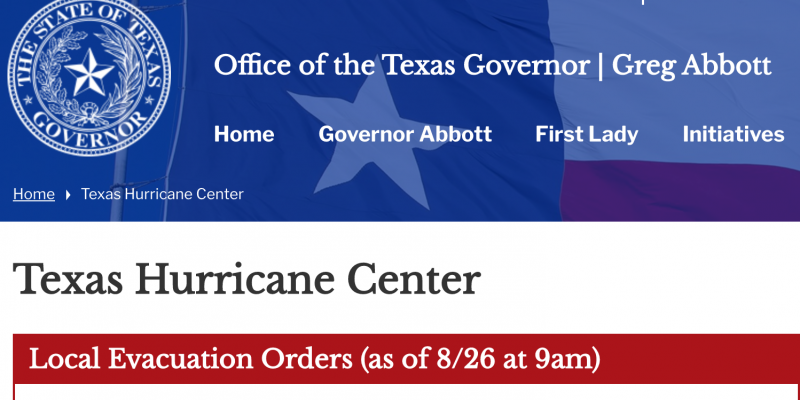 “Hurricane Laura is rapidly intensifying and poses a major threat to communities in Southeast Texas and along the coast,” Abbott said Tuesday at a news conference in Austin. “Texans in the path of this storm should waste no time preparing for the impact of Hurricane Laura and take immediate action to keep themselves and their loved ones safe.”

The governor urged residents in the Southeast and coastal communities “to heed the guidance of local officials, follow evacuation orders, and remain vigilant as we brace for the impact of Hurricane Laura.”

Laura is expected to make landfall as early as Wednesday and bring heavy rainfall, flooding, high winds and storm surges, Abbott said. The governor also added another 36 counties to the State Disaster Declaration.

Residents of Galveston have already begun evacuating and a full list of mandatory and voluntary evacuations can be found online at the Texas Hurricane Center.

The state has opened reception centers for evacuees in the Austin, Dallas Fort-Worth, Ellis County and San Antonio areas and is providing buses to transport evacuees. They include:

There are more than 225,000 hotel rooms being made available across the state to provide shelter to evacuees.

Hurricane Laura was upgraded from a tropical storm earlier Tuesday and is expected to gain strength to a Category 3 or 4 hurricane as it makes landfall over Southeast Texas and Southwest Louisiana late Wednesday or early Thursday.

Interested in more news from Texas? We've got you covered! See More Texas News
Previous Article NFSB survey: 1 in 5 small business owners say they will close if economic conditions don’t improve within 6 months
Next Article We’re About To See A COVID Hurricane In Louisiana