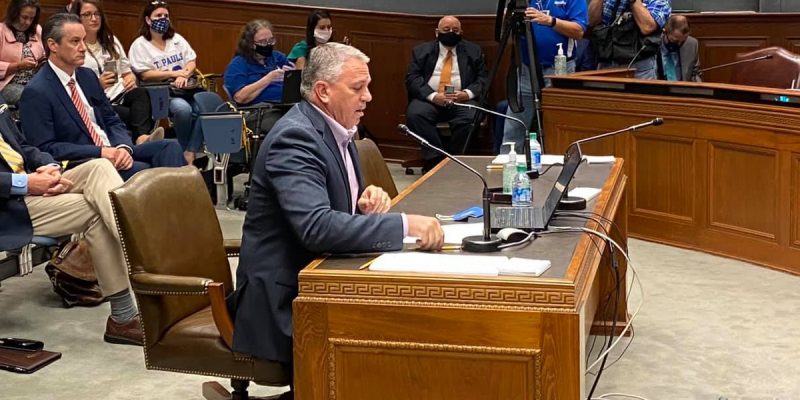 There was a legislative committee hearing Friday, the outcome of which was that the Louisiana High School Athletic Association announced they’re going to allow the high school football season in Louisiana to commence on October 9 – more than a month after everybody else in the South has begun playing.

By any reasonable standard this isn’t something to brag about. But on Friday, there was this Facebook post put out by Leading Louisiana, the organization House Speaker Clay Schexnayder and Senate President Paige Cortez (but mostly Schexnayder) have founded to raise money and do messaging…

From Louisiana Speaker of the House Clay Schexnayder:

“To this point, no one has grabbed the bull by the horns and taken leadership on this issue of allowing our children to return to competitive sports. So that’s what we’ve done.

Let me start by asking everyone here to not forget the dozens of parishes from the bottom to the top of this state that were devastated by Hurricane Laura. I’ve spent the last week in nearly every single one of them and let me tell you – they are hurting, badly, and they have a long road ahead of them. Please continue to keep your fellow citizens in your prayers and if you are capable, do something to help.

When COVID hit Louisiana in March, I don’t think any of us were prepared for what would come. How could we be? The loss of life and economic devastation was overwhelming. We listened to experts, we stayed home, and we closed our businesses. We adjusted to what I like to call the temporary abnormal, and we flatted the curve.

As we began to reopen for the first time, we were hit with another wave that brought more death and economic hardship. We saw cases spike and hospitalizations rise to unsustainable levels. Again, we rallied together. Despite us all hating them, we wore masks. We kept our distance. And again, we flattened the curve.

Which brings us to today. Our hospitalizations are down and case growth is slowing. Due to the people of this state stepping up and doing what was asked of them. Now, it’s time to move forward. Responsibly. Together. I am confident we can begin to move out of the temporary abnormal and begin to restore a sense of normal, while still following public health guidelines. We have no choice. It’s time.

I called this meeting to focus on our future. To focus on our children’s future. They need to be in school and they need to return to sports. And do it safely. I want to be very clear – this meeting and following action IS NOT an attempt to ignore public health advice or best practices. It’s about beginning to move out of the temporary abnormal and back to life.

To this point, no one has grabbed the bull by the horns and taken leadership on this issue of allowing our children to return to competitive sports. So that’s what we are doing. We have all the stakeholders in the room today. This is getting done. Over the last several weeks we have met with and listened to parents, teachers, principals, the LHSAA, BESE, the governor, and medical professionals. We talked about how we return to sports and turn the Friday night lights back on, and not have to turn them back off. It’s time to snap on chin straps and cheer for the home team.

In order to do that, we must continue to proceed cautiously and deliberately – unlike some of our neighboring states that went back to football too quickly and are now having to stop mid-season. To that end, I worked with healthcare experts at Our Lady of the Lake to develop a set of recommendations that we will release later today, meant to guide schools, alongside the Louisiana Department of Health and LHSAA advice, in returning to sports safely.

The “full statement” part is the transcript of what Schexnayder said at the hearing.

He says he’s “taken the bull by the horns” on high school football.

Last weekend every state in the deep South had high school football games. Louisiana is the absolute trailer. Anybody taking “the bull by the horns” gets credit for being the slowest and most timid bull-wrestler in the South.

Which, since he’s now rushing to take credit for the LHSAA’s decision, is Clay Schexnayder.

Let’s remember that Clay Schexnayder was given a perfect tool to exercise leverage over Gov. John Bel Edwards amid his draconian shutdown regime, something experts across the globe have begun to admit was an unnecessary and stupid economic disaster and a public-policy mistake that didn’t halt the spread of COVID-19. Schexnayder was presented with the idea of a petition favored by, at one point, a majority of the Louisiana House of Representatives, which would have canceled Edwards’ emergency declaration and brought Louisiana back to the normal mode he says it’s time to go back to.

Bear in mind that it’s been a solid month of declining COVID-19 numbers in Louisiana. At no point was the state’s hospital capacity reached thanks to the virus. For the last month a variety of treatments for the virus have emerged making containing its effects easier for all but the most serious patients. And nearly half the COVID-19 deaths in Louisiana from the very beginning have come from nursing homes. The median age of those dying with COVID-19 (some six percent of which, according to the CDC, actually died of COVID-19 without some other discernible comorbidity) is 77, which is older than the state’s life expectancy of 75.6 years.

And at the same time, Louisiana has the worst-performing economy in America in terms of jobs, which has led to a massive outmigration the size of which we won’t be able to measure until the Census has its statistics out next year – but we do know that UHaul rates show huge disparities with respect to Louisiana vis-a-vis Florida and Texas, and that’s a sure-fire indicator of an exodus in the making.

Schexnayder has had that petition on offer, and it has more than 40 names on it. It’s even been in the high 40’s at times during the past three months. But Schexnayder stood in the way of it getting to 53.

He’s sent messages to legislators railing against the petition. There was this…

(From the Speaker) Members,
After the session we just completed it is unfortunate that I have to send this text.

Over the last six months we have faced adversities no one could have imagined and we prevailed. We came together as a body and party to pass monumental and impactful legislation that some said could never be passed. We stood up for the people of Louisiana and the small businesses that employ them. Instead of being able to return to your districts and families and put these policies into motion, many members are returning to attack ads from within our own body and our own party.

Everyone reading this knows I have your back and will stand with you during the ups and downs. But let me be crystal clear: I WILL NOT allow our party to implode from within and I WILL NOT stand idly by while ANYONE tries to publicly or privately intimidate members.

If you need me, call me. I’m not going anywhere.

(From the Speaker) Members,
There is a current campaign underway to pressure you into making a decision to revoke the governor’s emergency health declaration. I wanted to provide you with the potential unintended consequences if the declaration is revoked. Feel free to use as needed:

-IF THE PUBLIC HEALTH EMERGENCY IS CANCELED, GOHSEP and LDH can NO LONGER coordinate with federal and local authorities on assessment, mitigation, and response during a public health emergency (La. R.S. 29: 766(E)).

– IF THE PUBLIC HEALTH EMERGENCY IS CANCELED, GOHSEP and LDH will NO LONGER have the authority to decontaminate facilities where there is a reasonable cause to believe there is a danger to public health, like nursing homes (La. R.S. 29: 769(A)).

– IF THE PUBLIC HEALTH EMERGENCY IS CANCELED, GOHSEP and LDH will NO LONGER have the ability to procure materials necessary to respond to a public health emergency, such as testing supplies and PPE’s (La. R.S. 29: 769(B)).

– IF THE PUBLIC HEALTH EMERGENCY IS CANCELED, the facilities currently treating COVID-19 patients could be subject to civil liabilities for injury or death of a patient. In the event of a natural disaster such as a hurricane or tornado, that would require sheltering, the shelter would be subject to civil liabilities for injuries or death of an individual taking shelter (La. R.S. 29: 771(B)).

– IF THE PUBLIC HEALTH EMERGENCY IS CANCELED, it is a possibility that Louisiana would lose future COVID related federal assistance. Without federal assistance, all of the financial costs will be not only on our state but also on every level of government – municipalities, parishes, school boards, sheriffs, etc.

– There is currently a federal mandate that during a public health emergency, insurance companies provide diagnostic testing, follow-up, and treatment for COVID-19 with no cost-sharing requirement of the insured individual. Ending the emergency declaration creates uncertainty for everyone with private health insurance as to whether COVID treatment will be covered by their policy. 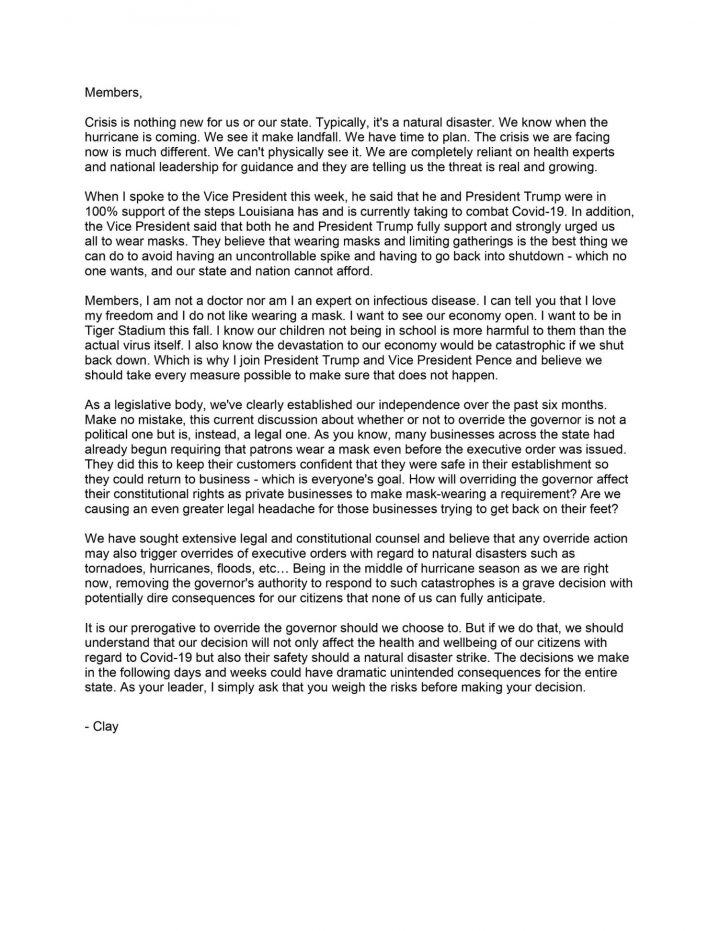 And even as late as two weeks ago there was this… 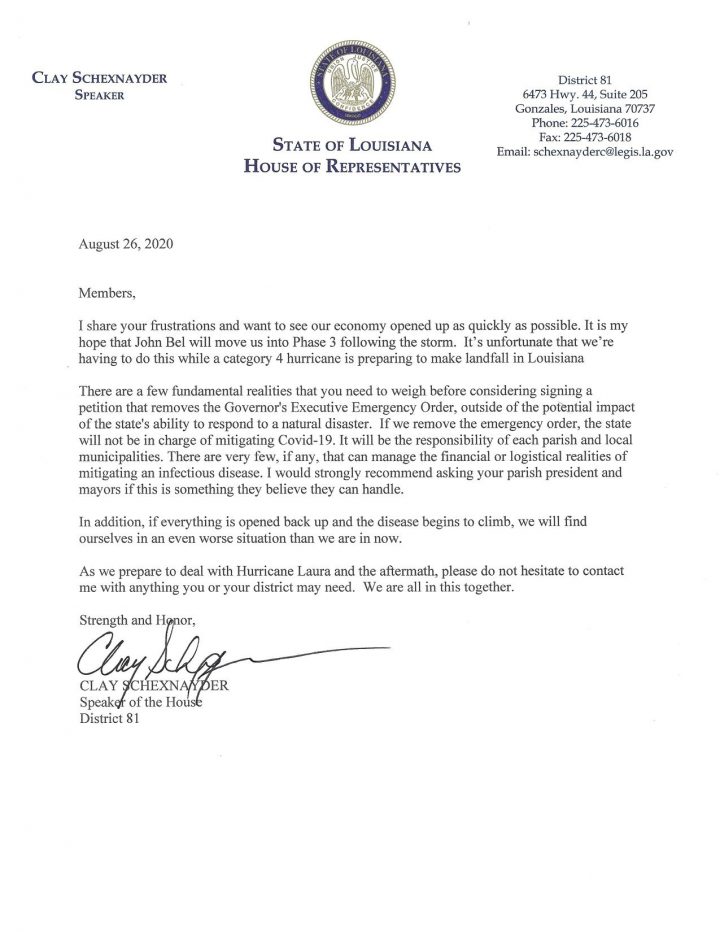 All Schexnayder had to do was let that petition get to 53 signatures and take it in hand to Edwards with the threat/promise that he would file it if the Governor did anything he and the House wasn’t on board with, and he could have controlled the level of Louisiana’s economic lockdown. You’ll notice that as high-handed as Edwards has been, and despite the fact he and his people opposed the LHSAA’s move last week, he didn’t stand in the way of a Mack truck.

Instead, Schexnayder spent the last three months doing everything he could to keep the state shut down. Schexnayder even ran out a poll aimed at scaring legislators into compliance, purporting to show sky-high approval ratings for the governor’s shutdown, even after Edwards imposed an idiotic mask mandate and bar closure the state’s Attorney General advised was unconstitutional.

And now he wants credit for “taking the bull by the horns” on opening high school football a month after Mississippi does?

You’re entitled to say that Clay Schexnayder is being measured and cautious and prudent. You’re also entitled to a different opinion; that he’s been a complete coward throughout this nightmare and has prevented more capable and principled members from actually “taking the bull by the horns” and forcing Edwards to reopen Louisiana some time ago.

Before we fell a month behind our neighbors, on high school football and virtually everything else, and before thousands, or tens of thousands, of our people loaded up those UHauls and got the hell out of here.

Believe what you want. By now our position at The Hayride ought to be pretty clear.