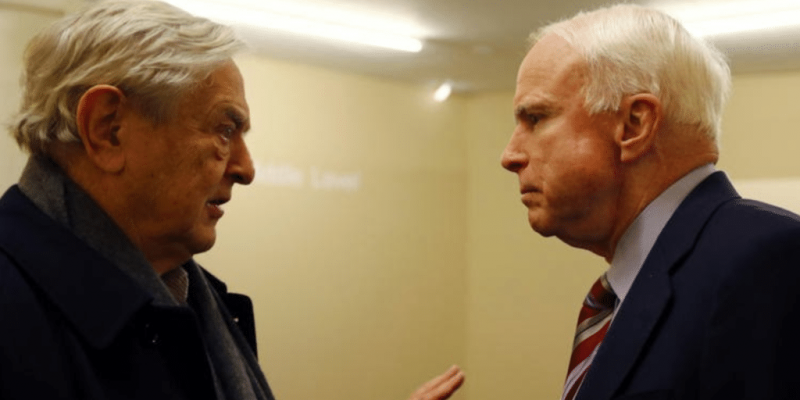 Such is the case of John McCain.

McCain’s life is a chronicle of bad actions with no consequences.

Those bad actions began, arguably, on the flight deck of the USS Forrestal on July 29, 1967. On that day, 134 United States sailors lost their lives, because of the combination of negligent actions of several pilots waiting to be launched into battle. Because of his family pedigree, McCain never faced any consequences for his participation in the deaths of the sailors and the destruction of aircraft aboard the carrier. One is encouraged to conduct their own investigation with the materials extant.

After being shot down over North Vietnam, McCain spent approximately five years in the Hanoi Hilton as a communist prisoner. No doubt he was tortured and spent horrendous years as guests of the North Vietnamese. Upon his release, he was honored as a hero and found a new life in politics. The transition seemed seamless. To this day, some of his fellow American inmates quietly dismiss McCain’s hero status, but again, it is up to the reader to decide with the information extant.

My focus is on what McCain did to sink Donald Trump’s Presidency from the day he was inaugurated, because that effort continues to this moment. There is no doubt McCain participated in the legitimizing of the bastard Steele Dossier, by giving it to the FBI. This was done while McCain was a dubious, lingering member of the Senate contemplating his own failed candidacy for President nearly a decade before. Why would a man who served in the United States Navy and a former prisoner of war under a communist regime attack the President of the United States with a known false dossier? What could have been his motive? Why would a “war” hero attack his own government?

Perhaps the answers lie in what McCain did and what he failed to do as a United States Senator. President Trump knows McCain’s failure, which are patent. Trump also knows McCain’s association with John Kerry, who helped him scrub his naval records, among other things. And Trump knows McCain’s relationship with George Soros, whom to this day, is behind the attempted destruction of the Trump Presidency. Indeed, Soros has captured many members of Congress and one can argue legitimately, he has captured the Democrat Party and has imprisoned them in the Soros Hilton in Katonah, New York. (Westchester County–eight miles from the Clinton’s home)

Yes, many powerful Democrats have supinely allowed themselves to become inmates of George Soros, as McCain was before his death. There are no bars in the Soros Hilton, because the only restraints binding them together are his money, and the promises of continued wealth and power, which can drive any man or woman into the deepest state of delirium.

We have witnessed it in the past three years, now, and lamentably it will continued until November 3, 2020. The last effort was performed by the Atlantic Magazine’s unsourced, mythical expose of Donald Trump’s sentiment of our veterans who perished over a hundred years ago in Belleau Wood, France. That scrawl had as much credibility as the McCain-proffered Steele Dossier and will share the same disastrous results.

Yes, we are about 54 days from deciding if Donald Trump will be re-elected the President of the most blessed nation on earth, or the United States becomes a Socialist pawn of the globalist, or the collective, which will drive an orgasmic frisson through George Soros’ saggy body. It is up to each American to storm the polls and defy the democrats and their high-tech minions from controlling our political speech, our vote, and the counting of our votes on November 3, 2020. It is also time to close and seal the grave of John McCain, and prevent him reaching from the tomb to deny America a free and honest election. Requiescat in Pace, Mr. McCain.

Interested in more national news? We've got you covered! See More National News
Previous Article USGA to get $40M in incentives to open headquarters in North Carolina
Next Article APPEL: On Opportunities And Outcomes