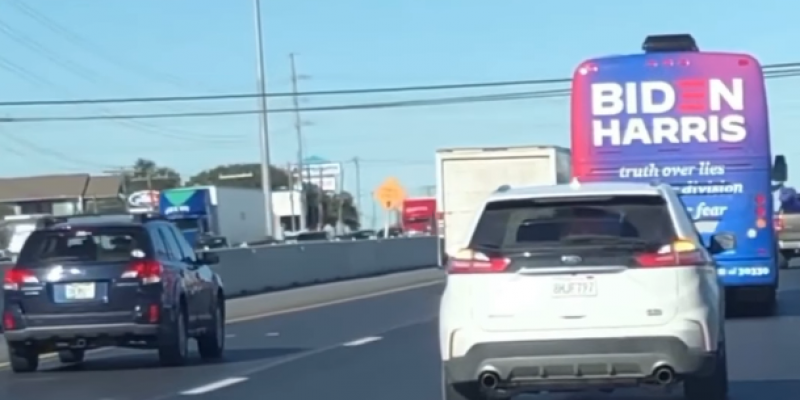 The Biden-Harris campaign canceled tour stops on Friday after reports that a bus transporting campaign surrogates from San Antonio to Austin was “rammed” by pro-Trump vehicles.

The reports turned out to be exaggerated takes on an actual highway incident involving two vehicles.

Pro-Trump supporters had organized several events to flank en route tour buses for the campaign with cars, trucks, motorcycles, and even a funeral hearse. Trump supporters escorted a bus carrying Democratic vice presidential hopeful Kamala Harris to and from Houston (and presumably out of Texas). In these not-so-friendly escorts, vehicles sporting Trump flags surrounded each bus as closely as possible, gaining notice by Donald Trump himself.

As a Biden surrogate bus left San Antonio — carrying on board U.S. Reps. Lloyd Doggett (CD 35) and Roland Gutierrez (CD 19), and a challenger to U.S. Rep. Chip Roy, former Texas Senator and abortion proponent Wendy Davis — a dark-colored truck with a Texas license plate appeared to side-swipe a white SUV with a California plate. According to a local source from Canyon Lake, Texas, the incident occurred on northbound Interstate Highway 35 near New Braunfels, Texas.

Please vote. Please volunteer this weekend. The future of our democracy is at stake. pic.twitter.com/G0O4yg2vnJ

Texas House member Rafael Anchia added his commentary via Twitter, throwing in an unrelated and unverified claim that President Donald Trump is to blame for 200,000 COVID-19 deaths:

At least the Trump hearse is appropriate given the 200K+ Americans who have died due to his incompetence. #VoteHimOut pic.twitter.com/vUyhhKyceo

The incident is being investigated by the FBI, the Texas Tribune reported. Liberal press outlets such as the Daily Beast sensationalized the incident as an “ambush” by dangerous Trump supporters — seemingly ignorant of the danger the summer’s social justice marches and BLM protests represented, including burned buildings, damaged historical markers, and outright blocking traffic on the same interstate highway.

From the hip: “You never want to let a good crisis go to waste,” Rahm Emmanuel is attributed to having said, summarizing a much older political tactic. This apparently now includes mere speculations of a crisis as we don’t have all the facts yet.

Consider this: Whether the concern for safety was legitimate or not (we’re guessing not), Texas Democrats got way more mileage out of this bus tour by abiding by another time-honored political tactic: