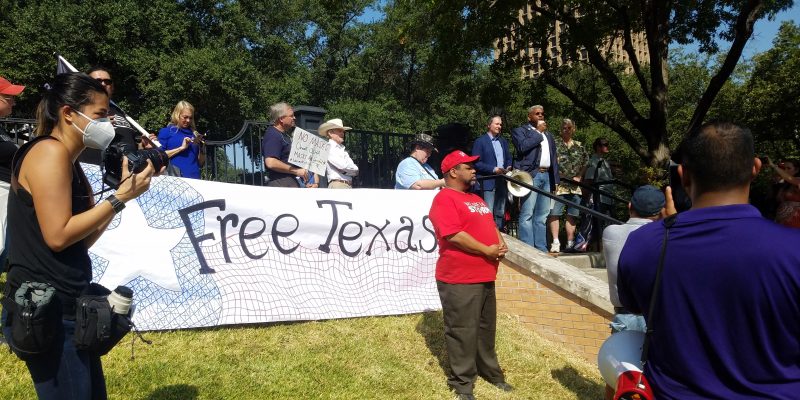 On Saturday October 10th with Texas still under COVID-19 restrictions, patriots gathered at the Texas Governor’s Mansion to rally for Texas to completely reopen with no restrictions.  The event was hosted by Empower Texans & Texas Scorecard founder Michael Quinn Sullivan and brought a number of elected officials and other dignitaries to speak before a energetic crowd. 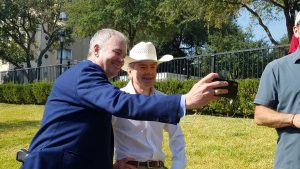 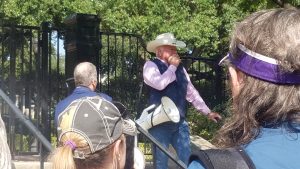 Texas Agriculture Commissioner Sid Miller lead off the list of speakers. His closing comment was  “Quite frankly Governor, your cure is worse than the disease.” He was followed by former Texas House Representative Matt Rinaldi who echoed that other states have lifted all COVID-19 restrictions including mask mandates such as Florida while some states such as South Dakota did not enact any lockdowns or mask mandates at all. 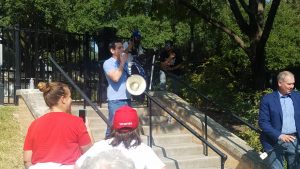 Rinaldi was followed by former Texas State Senator Don Huffines who made a point about religious institutions also being subject to the same restrictions such as churches were forced to be closed on Easter.  Huffines even labeled Governor Greg Abbott, “King Abbott”
State Senator Bob Hall was introduced as one of the few members of the Legislature that has openly confronted the Governor on his COVID-19 economic restrictions and enacting a mask mandate. 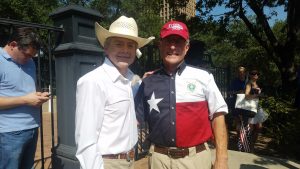 Even the chairman of the Republican Party of Texas, Col. Allen West came to the event to speak.  Col. West  brought a copy of the resolution passed by the State Republican Executive Committee 58-4 demanding that Governor Abbott end all COVID-19 restrictions and mask mandate and left the copy in the gate leading to the Governor’s Mansion.  Many members of the crowd also shouted, West, Huffines, and Rinaldi for Governor, each of which downplayed the speculation, at least for the time being. 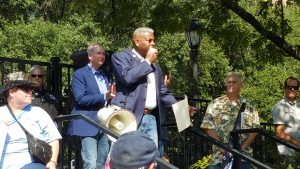 The event itself went off largely peacefully and uneventfully thanks to the private security firm, “Texas Defense Force” that the event organizers hired.  They quickly defused a situation where a crazy person wondered into the crowd spouting racist language as well as local political performance artist Robert Morrow’s attempts to antagonize the crowd, complete with jester cap, pink sock, and overdoing it with the face protection. 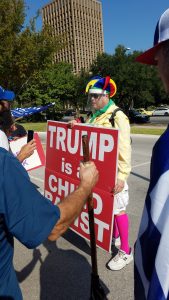 After the Rally concluded Alex Jones showed up in his trademark Infowars Bearcat and dropped off “Warroom” host Owen Shroyer, complete with Megaphone to address the remaining crowd.  Jones even bullhorned insults at Morrow from his Bearcat. 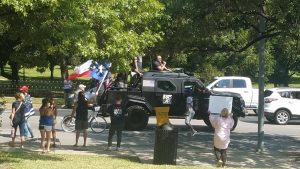 The Rally was meant to send a message from the grass-roots to the legislature that the citizens of Texas had enough of the lockdowns, mask mandates, and economic restrictions.  While there was much chatter on social media over the weekend that Col West should not have spoken at the event and been so harsh on Gov Abbott, It was that very reason Col. West was elected in a landslide for RPT Chairman.  The delegates to the RPT State Convention wanted a chairman to stand up to Gov Abbott and to show that he is in fact vulnerable to being primaried from the right.  It’s going to be a very interesting next couple of years until the Texas mid-term election to say the least.
Interested in more news from Texas? We've got you covered! See More Texas News
Previous Article Chinese espionage in Midland, Texas–Christian pastor claims Chinese Communist Party is after him [video]
Next Article Days before early voting begins, court’s issue competing rulings over Gov. Abbott’s ballot security proclamation