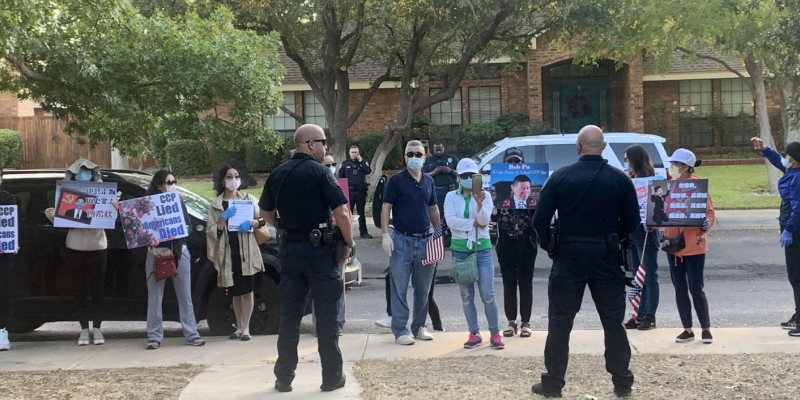 Pastor Bob Fu, founder and president of China Aid, based in Midland, Texas, claims that the Chinese Communist Party has dispatched operatives to the U.S. in order to specifically harass him and his family.

Police officers dispersed individuals at the protest, some of whom were waving signs that said, “Xiqiu Fu started the coronavirus.” One individual was arrested.

At the heart of the controversy is Guo Wengui (who goes by Miles Kwok in the U.S.). Politico describes Kwok as “A billionaire at the center of U.S.-China tensions is waging a mysterious legal battle against two D.C. conservatives over a private espionage deal gone bad.” The Washington Post reports that Kwok fled China after being accused of bribery and allegedly committing other crimes.

Kwok posted a video on YouTube announcing that he sent protesters to Fu’s house because he claims Fu is a communist spy. Bounty threats have also been made against Fu on social media.

Fu was born and raised in mainland China and was a student leader during the Tiananmen Square demonstrations in 1989. He became a Christian and later worked at a government job during the day and led house church services at night. After authorities discovered Dr. Fu’s ministry they imprisoned him and his wife for “illegal evangelism” in 1996. One year later, Fu and his wife sought asylum in the U.S. in 1997 as religious refugees.

Fu founded China Aid in 2002 in order to bring international attention to China’s extensive human rights abuses with the hope of promoting religious freedom in China.

“Apparently the Chinese government has hired Bob to be a Christian leader in the Communist Party,” Payton added. “So if that is true I hope you can hear the satire dripping from my mouth. We have made a list of people Bob Fu, the agent of China, would like to see released from prison since he holds that kind of power and these accusations are being made against him.”

Payton then listed the names of Christians in prison Fu is asking to be released from prison.

On Friday, U.S. Congressman Chris Smith, R-NJ, who has known Fu for 22 years, released a statement about Wu’s plight. He said,

“I am deeply concerned that since late September, Pastor Bob Fu, founder of the nonprofit ChinaAid, and his family have been the targets of outrageous slander, libel, and intimidation by suspected members of the Chinese Communist Party, and their enablers, and are at grave risk of serious bodily harm.”

“Bob Fu is an extraordinary man of deep faith in God who has tenaciously advocated for universally recognized human rights in China including and especially religious freedom.”

Smith is the former chairman of the House Foreign Affairs Human Rights Subcommittee and chair of the Congressional-Executive China Commission—and now Ranking Member on both panels. At Smith’s request and invitation, Fu has given expert testimony at 13 different congressional hearings.

“Owing to his exceptional success exposing—and combating—human rights abuses in China, Bob Fu has been targeted in a vicious and dangerous campaign to smear his excellent reputation and work,” Smith adds.

“The FBI and CIA are investigating but much more needs to be done to protect this human rights hero and his family.”

Pastors, elected officials, community and business leaders, families and all freedom-loving citizens are invited to attend.

“Communism has reared its evil head in the U.S.A. in 2020 in a more direct way than since the peak of the Cold War years and fall of the U.S.S.R.,” the council says. “As importantly, it is a direct attempt to silence pastors, churches and the work of the Gospel both here and in China.

“U.S. Pastor Council is joining other ministries and leaders in calling on pastors from “every color, every corner” of the U.S. to stand with Pastor Bob Fu and the other persecuted pastors NOW!”