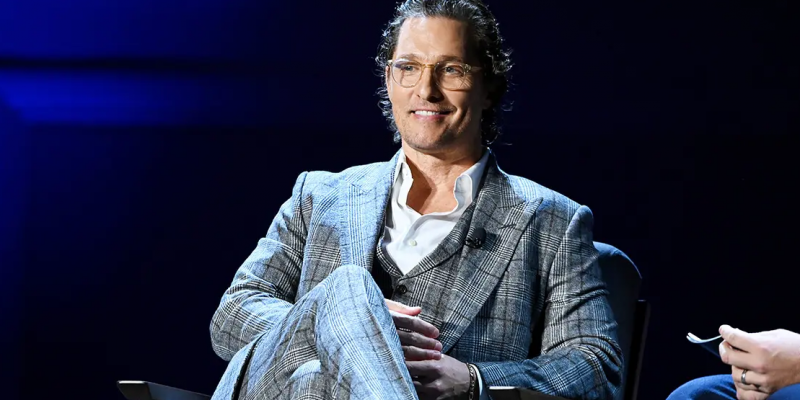 While the Oscar-winning actor has made it clear last night he has no concrete plans to run for Governor of Texas, Matthew McConaughey generated no shortage of headlines for a flirtation with the idea that would put any of his rom-com roles to shame.

Appearing on the far-left “The Late Show with Stephen Colbert” on Wednesday night, the 51-year-old actor balked at recent reports that he’s considering running for governor.

“I have no plans to do that right now, as I said, that would be up to a lot of other people,” McConaughey said. “… Right now, no. I don’t get politics. Politics seems to be a broken business. Politics needs to redefine its purpose.”

He continued: “As I move forward in life, am I going to consider leadership roles where I can be most useful? I’d love to, I’m doing that regardless. That’s where I sit right now.”

On Tuesday, McConaughey did not immediately shut down a suggestion that he may run during an interview with conservative radio host Hugh Hewitt — thus sparking the speculation that he was interested in running.

McConaughey currently lives in the Austin area with his wife, three children, and his 88-year-old mother.

An essential part of Austin lore having starred in the locally filmed cult-favorite “Dazed and Confused” (in which his catchphrases “alright, alright, alright!” and “It’d be a lot cooler if you did” were coined) McConaughey is now an ambassador of sorts for the University of Texas and its athletics programs, and is a visiting film professor.

Texans will vote for Governor again in 2022.

FROM THE HIP: McConaughey’s recent memoir, “Greenlights,” won praise for common-sense aphorisms and reliance on biblical proverbs, inspiring discussion that he is a friend to conservatism.

"For it will not be you speaking, but the Spirit of your Father speaking through you” – Matthew 10:20 #greenlightsbook out today pic.twitter.com/5Wv5HwJKyn

Recent comments added fuel to that fire, especially among those who suspect that Gov. Greg Abbott may hang it up after this term (Abbott has not indicated whether or not he would run again).

Not so fast. Though McConaughey appears to have more horse sense than your average Hollywood-type, his connections are worth considering.

For starters, you do not become a darling of the University of Texas by being a conservative stalwart. UT is the same university that has removed statues of even non-Confederate political heroes at the behest of angry mobs and making it difficult for conservative students to feel represented or included.

Spiritually, it’s harder to tell where his allegiances may lie. Though he reportedly attends a non-denominational church in the Austin area (that’s code for Baptist-lite, usually) he grew up around a moderate United Methodist church and had a Roman Catholic wedding. His new book makes frequent references to Scripture. Recently, McConaughey rattled some cages by suggesting “illiberal” anti-religious bias in Hollywood and the entertainment industry.

In 2017, “MM” made some waves by suggesting Americans come together and “embrace” their president, rather than the en vogue dunking on Donald Trump popular among celebrities.

On a partisan level, as stated above, McConaughey is no fan of party labels, and that probably includes the parties themselves.

On individual issues McConaughey seems to have leftist sensibilities on social issues. In a Daily Beast interview, he supported the #MeToo anti-sexual harassment and anti-rape movement and seemed to be supportive of gender and race-based pay adjustment mandates. “It’s an issue I have discussed with many women,” Matthew said. “We’re making progress, but are not there yet. Being paid equally is extremely important. It’s the same with race. Someday we’ll get to the point where women and minorities have equal opportunities. But we’re not there.”

Regarding COVID-19, McConaughey was quick to jump on the scene, filming a how-to video on how to turn a T-shirt into a makeshift face covering and decrying the political nature of wearing a mask in public.

In terms of his voting record, there is no record of him having voted in any of the counties around Austin, but these records are often suppressed to protect high-profile persons such as celebrities.

“One of the things that makes Matthew McConaughey such a unique film presence is his skill at playing a very specific type of old school, southern man. Throughout his career, McConaughey has used his accent and his charm to his advantage, playing characters that likely have a wide range of political views. It’s always been less clear, though, what the star actually believes about politics.”

Flirting with conservative politics helps McConaughey’s acting career. Whether he is conservative or not remains to be seen.


Interested in more news from Texas? We've got you covered! See More Texas News
Previous Article SADOW: Push-Polling A Toll Bridge Between Shreveport And Bossier City
Next Article We’re Not Sold On Lance Harris As A Congressman, Nor Should You Be