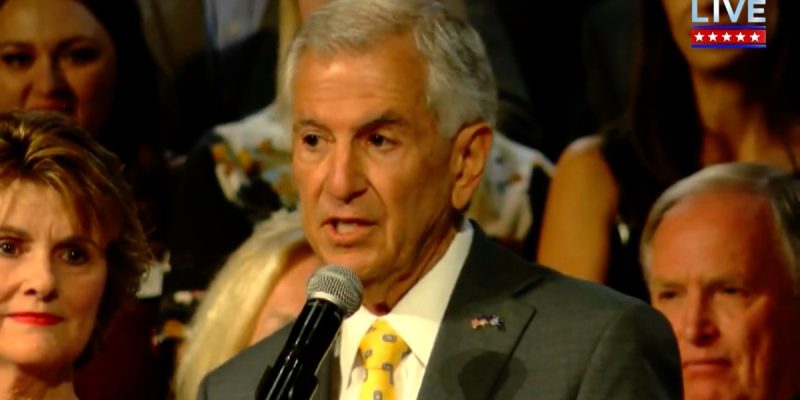 Last week there was an announcement which, within the small world of the insiders of the Louisiana Republican Party, was something of a big deal. Eddie Rispone, who ran unsuccessfully for governor last year, losing to John Bel Edwards by 40,000 votes, announced in an email to members of the Republican State Central Committee that he was going to run for chairman of the party.

Congratulations on your successful election to the Republican State Central Committee. A sincere thank you for your commitment to strengthening the Republican Party of Louisiana.

Together we can make Louisiana the best state in the south when it comes to jobs and opportunities for our children and future generations. It is the reason I ran for governor.

During the 2019 Gubernatorial race, we were out-spent and out-worked by our Democratic opposition. John Bel Edwards’ margin of victory in the runoff was 40,212 (2.67%) despite trailing the Republican candidates in the primary by 70,464 (5.25%).

The Louisiana Democratic Party spent over $2 million on “election day workers” and over $6 million total on GOTV expenses, resulting in a substantial increase in their voter turnout particularly in New Orleans, Shreveport, and Baton Rouge. This was funded by the billboard lawyers, opportunistic plaintiff attorneys, and the national liberal donors of the DNC and DGA.

My concern is that during 2019, nearly 40% of the RSCC members did not attend a single meeting. Without an active party, Republicans will continue to be at a competitive disadvantage against the Democrats with their election day tactics and big money liberal donors.

As you may know, earlier this year I took on the challenge of strengthening the Republican Party of Louisiana. With the help of RSCC members and our Republican Legislative Delegation, we sought to recruit members to improve RSCC attendance and involvement.

Now, after months of work and countless conversations with membership, I have decided to run for Chairman of the Louisiana Republican Party. It was never my intention to run but recognizing the substantial challenges we face as a body and as a party, I believe we need someone with major business and large organizational skills to ensure the party can be the most effective in helping elect conservatives in the future.

Rebuilding our Party is a team effort. You are the driving force of our movement, and our success depends on your input, involvement, and alignment with our goals.

Running for public office is a noble endeavor, and it often takes a great deal of courage and sacrifice. You have my sincere gratitude and I look forward to working with you.

Wishing you and your loved ones peace, health, happiness, and prosperity in the coming New Year.

Current chairman Louis Gurvich has said that he’ll be running for another term, which would mean Rispone will be mounting a direct challenge to Gurvich. Whether he’s the only one, we don’t know yet.

There are two things going on here which the election for the chairmanship, which will take place in mid-January, may be sorting out – or, better put – that members of the RSCC will be attempting to achieve.

The first is what is the nature of the LAGOP? Talk to Republicans all over the state and what you’ll hear is that everybody wants more from the party. They see things Democrats do, like the endless get-out-the-vote efforts in the black community, the lockstep bloc voting in the Legislature and the hyperaggressive leftism being pushed in the cities the Dems run, and they want to see the LAGOP effectively push back against those things where they can’t be emulated.

When a LaToya Cantrell is actively out destroying New Orleans, they ask why Republican politicians in the suburban parishes ringing that city aren’t just as actively building something.

And that’s an excellent question and observation. The problem is you can’t fix it with a state party. You need elected political leaders with brains and sand to fix those things.

The dissatisfied Republicans then ask, “well, why aren’t there enough Republican pols capable of doing those things?” They look at Florida and Texas and see legislators, local leaders, governors and the like carrying the GOP standard with gusto, and in Louisiana they see…Clay Schexnayder and Page Cortez.

That frustration is a reason why people aren’t satisfied with the LAGOP. Is it justifiable?

Here’s the truth: the LAGOP is not now, nor has it ever been, possessed with the power to shape and win elections in Louisiana. There is a fundamental, structural reason for that, which is that, at least for now (and hopefully not for much longer), Louisiana’s election system is built on jungle primaries. If the party isn’t able to select its candidates through closed party primaries, it has no power whatsoever to throw weight behind one candidate and against another.

And without that power, it can’t fix anything.

Ideally, what you’d like to see is closed party primaries in Louisiana, an active state GOP which has the financial and structural resources to make endorsements which all but seal the party’s nominations for local, state and federal offices, and then the ability to marshal votes in massive numbers the way Democrats can in the black community. There are more Republican voters in Louisiana than Democrat voters, even though there are more registered Dems than Republicans as of today.

This is a nice goal, but without massive structural change it’s a fantasy. And if you think there are problems with the LAGOP, take a look at the other side. Louisiana’s Democrats couldn’t field a single competitive candidate in any of the House races this year other than in Cedric Richmond’s district, and their favored candidate against Bill Cassidy, Adrian Perkins, was an unmitigated disaster. The Democrats are torn over who’s going to run their party going forward; a while lady is their current chair, but most of the registered voters and a large majority of their elected officials statewide are black. At some point black Democrats are going to insist on permanently taking that party over.

Right now the LAGOP is doing as well as it’s ever done. You can argue over how much credit Gurvich gets for that. He’s done a good job getting it out of debt, something that was a serious problem when he took office. Does he get credit for the surge in Republicans winning legislative seats? Probably not too much, as lots of people had their hands in those victories.

Gurvich did say that when he took office his goal was to get GOP voter registration in Louisiana over a million people. That’s been done. He’s saying the next goal is to get it above the Democrat total. At the current pace that’s going to happen before the 2023 gubernatorial election.

Is that just a natural thing the party chairman shouldn’t really take credit for? Who knows? He’s obviously not screwing it up.

Those successes have not, however, produced better political leadership from Republican elected officials. If Eddie Rispone is to beat Gurvich, he’s going to have to explain how that’s Gurvich’s fault, and also how he can produce it where Gurvich has not.

Which brings us to the second issue that a Gurvich-Rispone contest might turn on.

Namely, that let’s remember something: Eddie Rispone is the only Republican to lose a statewide election to a Democrat in Louisiana over the last four years. And other than Shane Smiley, whose nondescript and short-stacked campaign against Foster Campbell still managed to produce 47 percent of the vote for an unknown local official in a 23-parish Public Service Commission District, Rispone is the only Louisiana Republican in the last four years to lose any major election in the state.

We all know that Rispone’s gubernatorial campaign last year was a disaster. Its messaging was terrible, it couldn’t have done a worse job of outreach to local party people, it brought in out-of-state consultants and paid them king’s ransoms for awful TV commercials and nonsensical branding, its cost controls were void, it told a discordant story about the good man it was supposed to represent, it utterly failed to make the case for why John Bel Edwards was and is an atrocious governor and its ground game was nonexistent. By virtually every metric it was an atrociously-run campaign.

Most Republicans we talk to think that if Ralph Abraham, whom Rispone barely managed to climb over into the runoff with Edwards on the strength of a very expensive late-game ad blitz featuring internecine attacks, had been in the runoff with Edwards he would have won. That’s unknowable; we think it’s quite possibly true, but on the other hand Abraham had run out of money in the primary and it isn’t certain that his financial issues would have gone away in the runoff.

Rispone is going to have to explain why changing out the status quo, which over the last couple of years has produced a nearly unbroken string of electoral victories his own race for governor is the prime exception to, for what proved to be a negative deviation from the norm last year, would represent progress.

It isn’t that Rispone is a bad guy. He isn’t. Certainly he has the financial resources he could throw into improving the LAGOP’s capabilities. Rispone could flood the party with money and build up a well-staffed operation that might begin to achieve some of the things everybody wants.

The problem is, it’s not just money standing in the way of this total domination of the state’s political process Louisiana Republicans want. You have to do more than fund it, you have to sell it. You also have to staff it with the right people, something which is a concern after last year’s debacle.

Not to mention the public has to want to buy it. And Rispone couldn’t sell it last year.

He’s going to have to explain what lessons he learned from the 2019 campaign, and how his leadership of the LAGOP would mean an actual improvement over what the party currently presents – and where that night-and-day change will come from.

Rispone backed a number of candidates for the RSCC in the recent elections in advance of his declaration last week. Many of them won. He has a base of support on the committee, though nobody we talk to thinks that base is close to a majority. We’re not saying he can’t beat Gurvich. We are saying he’s going to have to put on a better sales job than he did last year in explaining why he should beat Gurvich.

And we’re happy to listen.