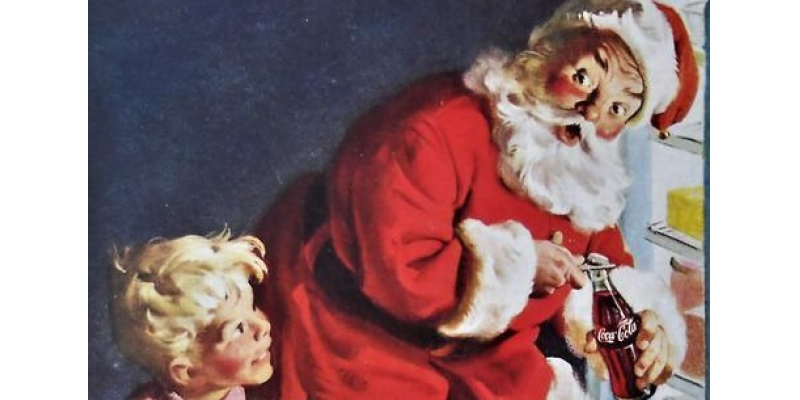 Given, Jolly Old Saint Nick has been through his share of cultural revisions.

From Turkish saint to soda pop salesman, the image of Santa Claus changes from generation to generation. The legends can differ wildly from nation to nation as just about every naughty or nice child knows.

But leave it to the intersectionality movement to do it again: This time Santa Claus as we have been taught is portrayed as a robber baron of the worst kind “used to further narratives of white supremacy, colonization, religious oppression, liberalism and, most of all, capitalism.”

That’s no parody. The anti-capitalist, pro-racial-reparations, anti-imperialist, anti-Zionist, pro-illegal-immigration, feminist, pro-abortion, anti-police, anti-prison, gay rights, and environmentalist organization Ally Ship is using the thought that Santa’s origins may be anything but noble to recruit new members. A “political re-education” event is scheduled for those who donate and join the organization. The buzz-wordy invitation reads:

Saint Nicholas, in his benevolent efforts to redistribute wealth, failed to translate charity to true allyship [sic]. While he gave everything he owned away, his actions didn’t result in a transformation of material condition for marginalized communities. Without tenets of principled allyship [sic] to guide him, Saint Nicholas’ benevolence was subverted, by systems of oppression …

[The hosts] will take attendees through a charming and imaginative session of reconceptualizing [sic] Saint Nicholas and his mythology. Current members of The Ally Ship will support attendees in cementing their new take on Old Saint Nick through fun challenges and activities.

This event is meant for white folx [sic] looking to adopt a praxis of allyship [sic] and seeking a political home.

Ally Ship and its neologism “allyship” is a subsidiary of 400+1, an organization centered around black community reparations. Do they have a point? Perhaps somewhat in that one man’s Santa may not match another’s idea of him, even in the same country.

The Santa Claus legend can be traced back to a Fourth Century Christian bishop St. Nicholas of Myra in modern-day Turkey. His legend of an enduring patron saint who looked after children continued in Christianized nations for centuries.

In colonial America, the predominant Christian beliefs of the time did not allow much in terms of holidays. The celebration of Christmas — let alone Santa Claus — was something that existed only in small pockets of immigrant cultures throughout the New World. Christmas continued to grow in popularity as immigration trends shot upward.

The modern image of Santa was created in the late 19th Century by American artist Thomas Nast, and gained traction via Christmas cards and other print media. This image translated well to sales, and a 1930s Coca-Cola ad campaign in which Santa’s red-and-white garb was all-but standardized. This is the image that endures to the time of writing.

Enter intersectionality, de-colonialization, Critical Race Theory, and other radical progressivist movements that have festered in the early 21st Century. To them, anything “Eurocentric” is highly scrutinized. Although St. Nicholas is himself a product of the Christianized Near-East, the predominant Western image is the whipping boy here. And it’s a recent phenomenon: Just last year, an event geared toward radicalizing teens, “Decolonializing Pop Culture: Past, Present, and Future,” addressed fears that Santa may be too white. Said a panelist:

As it happens, black Santas are not entirely absent in American culture. A 2016 BBC article gave plenty of ink to “The secret history of black Santas” in America.

In 2016, the Mall of the Americas hired a black man to portray Santa leading to comments that this was an appeasement to political correctness. Those complaining were deemed racist.

More recently, demand for inflatable brown-skinned Santas has risen after a Little Rock, Ark., neighborhood endured a dispute over one set up next to one of those “In this house, We believe in science, Love is love, etc.” yard signs.

Many of these local squabbles pale in comparison to some of the disputes in other countries. Take The Netherlands, for instance, in which Santa’s sidekick Zwarte Piet (Black Peter) is typically a white Dutch person in blackface. While the Dutch still adore Zwarte Piet as a hallowed tradition, the influence of Western liberalism insists that is subjugation and the height of cultural insensitivity.

While American Santa has no such indentured servant riding in his sleigh (shh … don’t tell PETA about his harnessing of eight differently enabled reindeer and transporting them across international boundaries), the specter of a materially successful patron of Christian values and promoter of holiday shopping is enough to drive a socialist mad: Even if Santa prefers red and redistributes his wealth globally.

Santa Claus’s legend rose in America along with its development as a world power and economic powerhouse. Socialists, of course, dispute the benefits of both and prefer an America where wealth is capped and its borders are indistinct. Re-visioning Santa is perhaps par for that course.

They are correct in that legend of Santa Claus taught to hundreds of millions of American children over the centuries “failed to translate charity” into perfect racial harmony. It’s true the Santa ethos has not engendered “a transformation of material condition” for each and every “marginalized community.” But the fact remains that capitalism and Western values is about as close as this world has ever gotten to an egalitarian system in which equal opportunity belongs to all.

Capitalism is an acceptance that human nature (including greed and inequality) exists, but that incentive and open markets are the best way to promote peace and goodwill toward all. Generosity continues to be at its finest in the private sector, whereas public efforts to wipe out poverty have shackled generations into systemic dependence on government subsidies. Well over half of America today is on some form of government handout — must that figure be higher for things to be better according to the Santa-critical woke crowd?

A socialist utopia is no more tenable than Santa’s workshop at the North Pole: both myths believed by the immature. Any attempt at “re-education” should start there.

Interested in more national news? We've got you covered! See More National News
Previous Article IRONY: The Folks Who Need The COVID Vaccine Most Don’t Want It
Next Article Florida households must make at least $117,017 to be in state’s top 20%