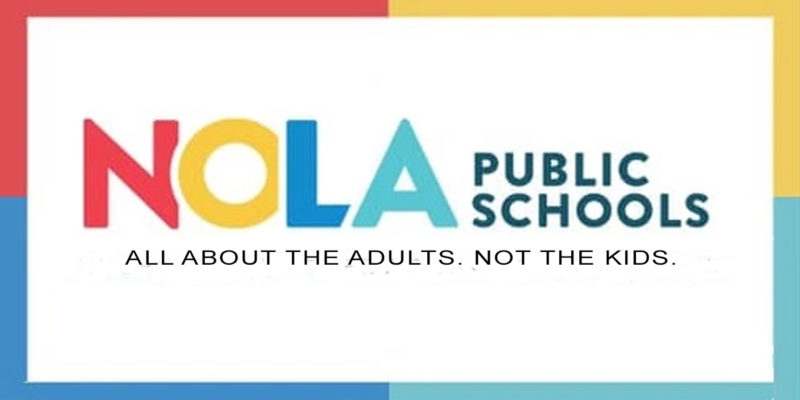 And now NOLA Public Schools, the name used for the Orleans Parish School District, has chosen to stay stuck on stupid – with a political goal in mind.

With its all-charter status cemented into state law, its School Board, which hires its superintendent Henderson Lewis, can’t make a whole lot of policy, but with its operational powers intact its decisions can have the same effect. And the ruling by Lewis which forces all district schools into distance learning only by week’s end shows that, despite massive changes in education delivery over the past 15 years, resistance to increased accountability remains the same.

Because there never has been any good reason to keep classrooms empty during the ongoing Wuhan coronavirus pandemic, even as Lewis justified his decision in that Orleans Parish shows a steady rise in cases per capita. The corresponding news release intones that the call “was driven by data and the advice of our public health experts.”

Which means these presumably educated folks can’t understand the data and got advice that stinks. Pandemic data make two things obvious, beginning with that for children in elementary and secondary schools, generally (and especially for those with fewer cognitive and material resources) their learning significantly erodes in a distance setting compared to in-person instruction.

And also, students are at close to zero risk for additional health complications by classroom attendance even with the pandemic. State statistics show that of the over 33,000 age-17-and-under Louisiana children known to have caught the virus (the number actually is far higher, given the multiplier of those who show few if any symptoms and therefore never are tested or received a virus diagnosis), only seven have died, or a mortality rate of 0.0208 percent.

Compare this with the latest year’s available seasonal influenza numbers nationally. In 2019-20, the estimated (which includes undiagnosed cases) mortality rate for this age group was 0.00347 percent, with an actually diagnosed rate of 0.00607 percent; in other words, about 30 percent the rate of the virus. So, if 6 out of 100,000 children die, we let it rip, but if it reaches 21 out of 100,000, everything shuts down?

The inconsistency of this approach further is illuminated by the system’s schizophrenic, if not hypocritical, treatment of special needs students, pre-kindergarten students, and free school meal distribution. Lewis said the district would continue to conduct many special needs classes – students in which are more likely to suffer from co-morbidities that make them more vulnerable to the virus – in person as well as some pre-kindergarten instruction, and he put no brakes on the meals program (which also includes school-age children not enrolled in the District), inviting families to belly on up to dozens of locations. Why is the virus so threatening as to knock out some congregate settings yet others at least as risky receive a pass?

This contradicts the notion that it’s adults unacceptably at risk, as otherwise no exceptions would exist – with which the tail wagging the dog here, the United Teachers of New Orleans, admits. Consequent to those reforms of 15 years ago, UTNO has gone in three decades from a group that could hold the entire parish hostage to a rump organization that has collective bargaining at just two schools.

Yet it still calls the tune to which district administrators dance. On the first day of the year, it issued a communiqué instructing the district to cease in-person instruction, to which Lewis complied three days later. Still, in that letter it outlined a few helpful measures – uniformly taken in the state’s higher education institutions – as well as a few gratuitous and unhelpful ones that the district could take with classroom instruction that would severely mitigate virus spread, obviating entirely a shutdown. (In any event, with the average age of Louisiana teachers at 42 – and probably significantly lower in Orleans with its charter population – and a retirement system that leaves little incentive to work into their 60s, few district employees who interact regularly with students likely have reached that age where the mortality rate from the virus becomes significant.)

All of the cognitive dissonance surrounding the plea for and execution of a distance learning protocol points to the politics behind the decision. For over half a decade Orleans student achievement, which factors majorly into the state’s school and district accountability scores, has stagnated if not declined, while other districts in the state, even with fewer familial choice options, move ahead relatively. Its relative rank among all districts has fallen from 40th in 2014 including all schools (the district used to retain and govern just the highest-performing schools, mostly not open to the general student population, with the state overseeing the remainder, but since then Orleans has had responsibility for all) to 55th in 2019.

Orleans, and other districts, received a reprieve this past year from the federal government that drives accountability measures as part of its funding. Whether it will give states that option again this year is uncertain, but by throwing its students out of the classroom again this school year Orleans creates a better argument for the state to take that route if available through using the same logic – the disruption caused by going to distance learning – as the excuse.

Which suits unions like UTNO and others in the field of education who oppose meaningful accountability standards such as Louisiana has just fine. That buys one more year for subjective, if not biased favorably, ratings of teacher performances to protect the weak instructors that ends up costing children better life prospects.

Unfortunately, in this instance the deleterious impact becomes compounded: inferior teachers still instructing plus lingering after-effects of a distance learning environment negatively affecting most students’ learning. But, as indicated by this directive, Orleans remains enthralled to a mindset problematic in many school districts and individual schools: the wants of adults placed ahead of the needs of children.