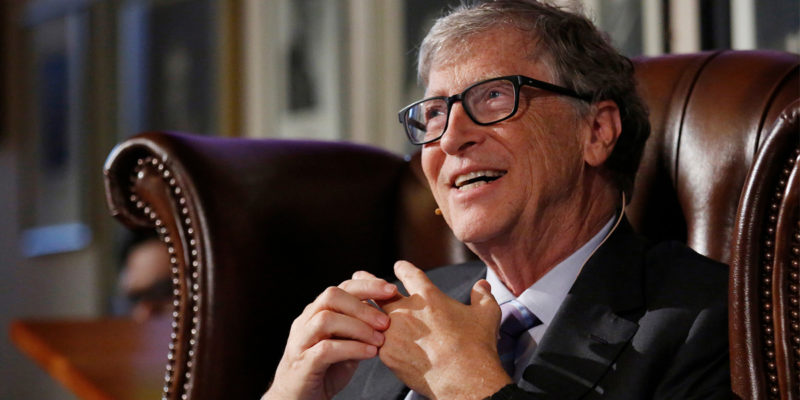 This isn’t an overreaction to Gates’ latest foray into the news cycle. It’s an observation based on a long pattern of statements and behavior by the founder of Microsoft and one of the richest men who has ever lived which, were any of us normal people guilty of them, would result in our being institutionalized.

Bill Gates is crazy. And he’s dangerous, because he’s willing to put untold sums of money toward making the insane things he believes a reality – and all of those insane things hurt people.

The most recent idiocy? Impossible Burgers for all the white people.

Microsoft co-founder Bill Gates recently stated that he believes “rich countries,” such as the United States and western Europe, should switch to eating 100 percent synthetic beef.

In a recent interview with the MIT Technology Review, Microsoft co-founder Bill Gates discussed his environmental impact efforts and various green initiatives aimed at reducing global carbon emissions. One suggestion Gates proposed was for wealthy and developed nations to move entirely to synthetic beef in efforts to reduce the carbon emissions from livestock.

For Africa and other poor countries, we’ll have to use animal genetics to dramatically raise the amount of beef per emissions for them. Weirdly, the US livestock, because they’re so productive, the emissions per pound of beef are dramatically less than emissions per pound in Africa. And as part of the [Bill and Melinda Gates] Foundation’s work, we’re taking the benefit of the African livestock, which means they can survive in heat, and crossing in the monstrous productivity both on the meat side and the milk side of the elite US beef lines.

So no, I don’t think the poorest 80 countries will be eating synthetic meat. I do think all rich countries should move to 100% synthetic beef. You can get used to the taste difference, and the claim is they’re going to make it taste even better over time. Eventually, that green premium is modest enough that you can sort of change the [behavior of] people or use regulation to totally shift the demand.

So for meat in the middle-income-and-above countries, I do think it’s possible. But it’s one of those ones where, wow, you have to track it every year and see, and the politics [are challenging]. There are all these bills that say it’s got to be called, basically, lab garbage to be sold. They don’t want us to use the beef label.

This isn’t even the scariest idea-biscuit Gates has floated. Remember this?

It sounds like a wacky idea out of science-fiction – but it’s funded in part by billionaire Microsoft founder Bill Gates and backed by top scientists at Harvard University.

The researchers believe that a fleet of specially-designed aircraft could spray sulfate particles into the lower stratosphere to cool down our planet and offset the effects of climate change.

A test of the technology has been proposed for this year, the Daily Mail reports, with the Stratospheric Controlled Perturbation Experiment (SCoPEx) seeing a bag of carbonate dust released into the atmosphere 12 miles up.

If that experiment proves successful, the researchers will move on to releasing the dust from planes.

The researchers suggest that jets flying 12 miles up would complete over 60,000 missions in 15 years, starting with a fleet of eight and moving up to 100 planes.

As bad as denying people in First World countries access to beef might be (and putting a massive industry employing more than half a million people out of business), creating an artificial Nuclear Winter is even worse.

More people freeze to death in extreme cold weather than die of heat-related causes when it’s hot, you know.

And then there’s the population control piece, which the Left – many if not most of whom operate on a Malthusian principle and don’t actually disagree with Gates – denies he’s for.

How you deny this is a question…

We’re not going to get into the vaccine stuff, much of which is the product of Alex Jones-style conspiracy theories every bit as crazy as Gates is. There’s a lot out there, though, and not all of it is good. Gates’ influence with public health bureaucrats like Anthony Fauci, who he has clearly bought off, is something of a concern. He’s an unelected software developer with no medical training; nothing about him suggests he’s qualified to make public policy on healthcare for an entire planet, no matter how heavily he wants to buy his way in.

What this comes down to, though, is that Bill Gates has been so rich for so long that he’s spent the bulk of his adult life without anyone telling him he’s wrong. That has the same corrosive effect on character and sanity that you see in the case of kings and dictators. People want some of Bill Gates’ money, so they constantly suck up to him and tell him his ideas are great even when they’re atrocious, and the guardrails normal people live between don’t exist in his case.

So he throws money around at insane things. That he isn’t outwardly off his rocker like Howard Hughes was is small comfort; Hughes mostly kept to himself in that hotel suite in Las Vegas as he descended into madness. Gates is everywhere.

Gates said that he modeled his charitable foundation after the one the Rockefeller family founded. But the Rockefellers took decades to become obsessed with globalist-utopian causes; Gates fell out of the philanthropic womb that way.

It’s a problem. There needs to be some limiting principle governing this man’s excesses. But where that will come from is a good question. When he’s openly discussing destroying an industry that directly employs a half-million Americans for the purposes of “climate change” (formerly known as global warming, until it couldn’t be denied that there was no statistically significant warming going on) when we’re in the middle of the worst cold snap much of the country has seen in decades, finding ways to check this increasingly nutty bull in a china shop begins to become an urgent necessity.

Perhaps it’s time to start taxing charitable foundations which engage in public policy-related activities. That could easily devolve into a mess, but the alternative could be that we increasingly have to live under the cracked worldview of out-of-touch billionaires like Bill Gates.