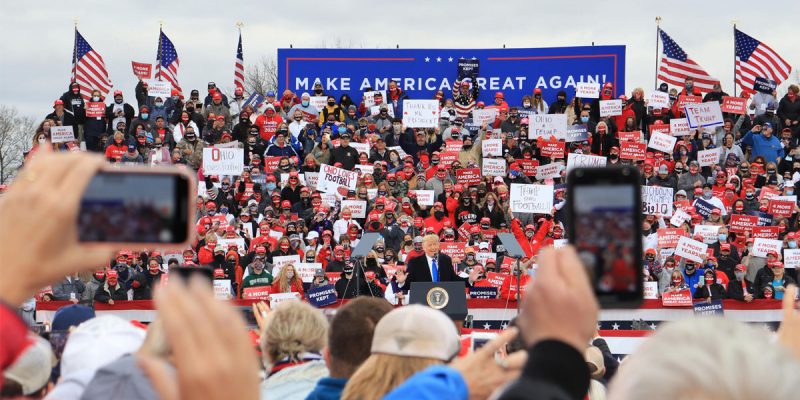 I’ve kept my powder dry on the subject, at least in these pages (I’ve let loose a little on it in a couple of episodes of the Post-Republic Podcast, which you can get if you join The Speakeasy, however). But I’m going to weigh in on this.

A couple of things are pretty obvious to me.

First of all, Donald Trump isn’t going to run in 2024. He’ll be 78 years old in 2024, which is the age Joe Biden is now. And when people watch Biden over the next year or two or however long he has before his handlers decide they’ve had enough and force his resignation, they’re going to decide 78 is too old to run for president. Now, nobody will equate a 78-year-old Trump with Biden at the same age, but it’ll be less than sellable all the same.

And Donald Trump is going to find better things to do over the next three years anyway. He’s going to go back to making money, perhaps in the media business, and he’ll enjoy being an ex-president. Especially if Melania Trump, who has to have earned a good deal of influence over his decisions after being such a trooper over the past four years when it was obvious she wasn’t all that happy as the First Lady (and was magnificent at the job nonetheless), has anything to say about it.

The second thing is that Donald Trump is going to control the Republican Party for the next three or four years. There is no decoupling of the GOP from the MAGA movement. They are one and the same.

Oh, sure, there are “Republican” luminaries on cable news and in magazines and opinion columns, and even a few on Capitol Hill, who fancy themselves the “true” Republican establishment.

They’re outliers. They’re dinosaurs. They don’t have any support.

Take, for example, the 10 House members led by the now-outgoing GOP conference chair Liz Cheney who voted with the Democrats on this peculiar impeachment. It’s quite unlikely any of them will have a career in elective politics after next year’s cycle has come and gone. By Friday Cheney will be ousted from her leadership position and relegated to a socially-distanced spot on the back bench, and by next year she will be put to pasture back in Wyoming. A poll of her constituents indicated that she has a paltry 10 percent support in a GOP primary race, with state senator Anthony Bouchard already announced as an opponent.

Seven of the 10, in fact, already have primary opponents more than a year out from the primary cycle next year. They’re all going to be gone, including the insufferable, ethically-challenged attention whore Adam Kinzinger of Illinois.

One of the biggest problems plaguing the Republican Party, which Trump effectively solved, was that its leadership hated its voters – and vice versa. The Democrats have this problem as well, but they paper it over with tribal identity politics. Republicans and conservatives can’t do identity politics, because philosophically they’re anti-collectivists; a disconnect between the leaders and the crowd is therefore a bigger problem.

If this doesn’t ring true for you, consider what passed for “success” on the GOP’s part in the period between Ronald Reagan’s leaving office in January 1989 and Trump’s inauguration in January 2017. That would be the Bushes, pere et fils.

George Herbert Walker Bush, of Kennebunkport and Houston, ran on the promise of a “kinder, gentler America.” Remember that? It always seemed to ring hollow coming behind eight years of runaway prosperity and cultural revival under Reagan. The message to conservatives and even Republican voters, who supported Bush essentially because they weren’t given a choice not to in 1988, was that they weren’t kind and gentle enough.

It rankled enough that when Bush proceeded to break his fundamental promise to his voters, namely that he wouldn’t raise taxes, his support collapsed. Bush lost re-election to Bill Clinton in large part because Ross Perot ran a third-party race against him and peeled off nearly 20 percent of the vote, nearly all of which would have gone his way. And the gentlemanly Bush 41’s response was to embrace the morally repugnant sexual predator Clinton as a personal friend.

Then his son George W. managed to squeak out election in 2000 against an utterly terrible opponent in Clinton’s vice president Al Gore. What was W’s tag line? “Compassionate conservatism” – as though conservatives, who make the lion’s share of charitable contributions in both money and time, are somehow not compassionate. It was an insult to a movement he claimed membership in, and while he won fairly easy re-election in 2004 that had more to do with the loathsome nature of John Kerry, his opponent (it’s simply amazing how Kerry manages to turn up again and again in government after the voters so thoroughly rejected him in that election). By 2006 the whole of America had eaten our fill of Bush and his support cratered under the weight of his open-borders immigration policy, big-government excesses and globalist military adventurism.

That Bush Republicanism spawned a whole slew of GOP politicians of varying degrees of talent and perception. The better ones, when Trump came along and thoroughly disrupted both the Republican electorate and American politics generally, recognized what was happening and modulated their approaches accordingly.

In doing so they managed to accomplish a whole lot in closing the gap between the party and its voting base.

Consider Lindsey Graham, who was absolutely hated within the Republican Party in 2016 when he ran a sad-sack primary presidential bid. By the Brett Kavanaugh hearings Graham had managed a popular resurgence, and last November he trashed a Democrat opponent in the South Carolina Senate race in a landslide despite some $100 million spent against him.

Graham might be sliding back into swamp-rat status now that Trump is gone, but he’s unlikely to revert to the John McCain mini-me he used to be. Graham knows the public has no use for that kind of politics anymore.

If Lindsey Graham can reinvent himself by picking up on themes Trump brought to the table, it’s not surprising many others within the party’s leadership have done the same thing.

And you aren’t going to win in Republican primaries, at least in the next couple of election cycles, unless you’re on board with the core precepts of Trumpism.

There is no moving on from Trump where China is concerned. Trump understood the threat China poses to America – politically, culturally, economically and militarily. Trump suggested pulling our supply chain out of China, punishing the Chinese Communists with tariffs for predatory economic behavior and standing up to them. Future GOP leaders will take hard lines on China, because the voters won’t support them otherwise. Democrats might reward solicitous behavior toward the ChiComs, but the Republican Party’s base will not.

An America First economic policy, rather than a blind free market position, is destined to be the GOP’s agenda for some time. Any conservative will instinctively favor free markets and limited government, but when it’s so obvious those are being abused and corrupted by the Left and others it’s simply untenable to unquestionably march into ambushes. The libertarian position that the U.S. government has no role to play in keeping foreign predators from destroying domestic jobs, or that the rich have the right to manipulate markets as they see fit regardless of the consequences to the middle class, is an abject disaster politically. It can’t win. You want a deregulated economy, but you have to maintain order and keep markets open.

Which, of course, has become a critical issue in the tech space. We’re now seeing an oligopoly of a very small number of companies – Facebook, Google, Amazon, Apple, and Twitter, all run out of Silicon Valley, a place which looks nothing like the rest of America – gaining a stranglehold on our economy, communications and culture. These guys, the top management of which are politically monolithic and radical Left, are a far larger threat to the good working order of the country than the robber barons of old ever were, and a whole lot less civic-minded.

Pushing back against that, when Big Tech doesn’t just villify and banish conservatism from its own platforms but assassinates conservative competitors, is a prime priority among conservative voters. The Bush Republican instinct is to shrug and say “they’re private companies; they can do what they want” while soliciting campaign checks and other honoraria from the tech oligarchs when crumbs do fall from their tables. That simply won’t cut it. It certainly hasn’t so far, and the debacle with Parler exposes the insufficiency and obsolescence of the “compassionate” crowd.

In a rather obnoxious, but not wrong, piece at The Week, Matthew Walther talked about the coming of what he called “Barstool Conservatism,” so named because it’s personified not by Trump but by Dave Portnoy, the proprietor of the Barstool Sports website. Walther is on to something with the characterization, but his argument loses weight at the beginning when he declares Trump no longer relevant to Republican elective politics.

Trump will be highly relevant. Trump is going to be the kingmaker in the GOP until there is someone who can carry the MAGA standard in his place. There are a good many candidates for that role. Right now the hottest one is Florida’s governor Ron DeSantis, whose handing of COVID-19 far exceeds Trump’s, who is engaged in battling Big Tech, who has battled the media more effectively than Trump.

And should DeSantis capture the movement and leverage it to win the presidency in 2024, only a disingenuous pundit would claim the GOP has “moved on” from Trump.

The pre-Trump, Reagan conservatism is defunct. Walther is correct about that. Everyone understood that back in 2016 when Trump came along. It wasn’t Trump who killed it; it was the Bushes. And the Bush progeny, genetic or otherwise, aren’t resuscitating their brand any time soon. They’re on the way out like Cheney and Kinzinger are.

Nobody will miss them.