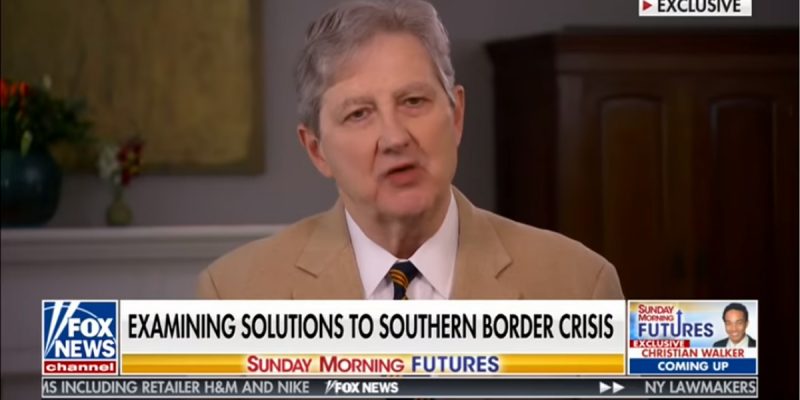 On Friday, Sen. John Kennedy (R-Louisiana) was among several Republican members of the Senate taking a junket to the Rio Grande to see the invasion of illegal migrants to our southern border, which has manifested itself in a mess of people being held in cramped, miserable camps by overwhelmed federal officials.

Kennedy was not impressed by what he saw.

It became clear to me today that 1 of 2 things is going on with the #BorderCrisis:

1. Either Pres. Biden believes in OPEN borders, or

2. The people Biden has put in charge of border security policy aren't qualified to manage a food truck. pic.twitter.com/3tIrKimWLL

The Biden administration is not handling the public relations aspect of the border crisis. That’s clear. They’ve put Vice President Kamala Harris, who when last week she was asked about the border made a joke about it, in charge of the problem. Harris then said she isn’t actually in charge of the border, so we don’t know who is.

Kennedy’s colleague Ted Cruz, Thursday, reacted to Harris’ nomination to run the response to the border, said it proves Biden doesn’t like her very much.

But Kennedy was then on Fox Business’ Morning Futures show on Sunday, and he unloaded on Harris as the new border czar and the Biden administration.

“After visiting the border, I understand why President Biden has blocked the press,” he said. “I’m not sure there are words in English, Maria, to describe it. It was mind-numbing. If it’s not a crisis, it will do until one gets here. President Biden is allowing in anywhere from 3,000 to 4,000 people a day. That’s about a million to a million-and-a-half a year. They’re not just coming from Central America and Mexico; 55 different nationalities are represented. This is not hard to figure out if you think about it. The — traditionally, America’s immigration policy, especially under President Biden — President Obama, was this. Anyone who is caught is allowed in. And anyone who is allowed in is not deported. The Trump administration and the Republican Congress changed all that. We secured the border. We did the safe third country agreements. We built the wall. We established the remain-in-Mexico program.

“President Biden comes in, and he dismantles everything,” Kennedy continued. “And he basically re-adopts President Obama’s policy, but on methamphetamines. He also issued a moratorium on all deportations. Now, unless you have been in lockdown too long, you know that one or two — of two things are going on. Either President Biden believes in open borders, or the people that he has put in charge of his immigration policy may be smart, but they don’t have any sense. They don’t have the sense that God gave a goose. I mean, reality calls, and they hang up. And now President Biden has put Vice President Harris in charge of fixing it. I know the vice president. She’s a lovely person. I sat on Judiciary with her. But that’s like — that’s like putting a Lance Armstrong in charge — as drug czar, in charge of our drug programs.”

“I mean, she’s called the Border Patrol a bunch of Ku Klux Klanners,” he added

Interested in more national news? We've got you covered! See More National News
Previous Article Coming to a city near you? California city is first in U.S. to ban new gas stations
Next Article SADOW: We’re Finding Out That Race-Hustling And Higher Ed Don’t Mix