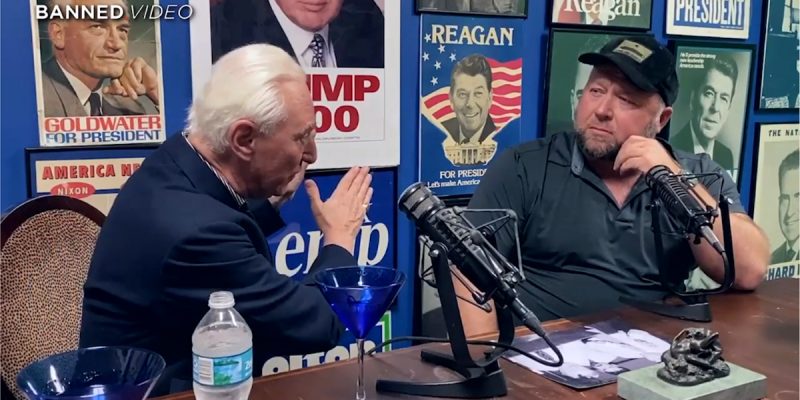 In late March 2021 Roger Stone invited Alex Jones to his lair, which many closest to Roger Stone have named “The Nixon Vault” to give an hour long video interview and tour of his campaign memorabilia.

In the interview, Stone gives a election postmortem that is anything but sugar-coated.  He outlines the many shortcomings of Republican political efforts in 2020, from letting the RINOs call too many of the shots to the failure to rein in media censorship along with the censorship on social bias.

The interview starts out with Jones touching on that after Stone’s pardon, the Washington Swamp was looking for any excuse, no matter how contrived, to indict both Stone and himself to send them to prison.  Stone states, “By the grace of God I escaped the deadly snare set for me by Adam Schiff and Robert Mueller.  And the hard left can’t get over it.  They’re devastated that I’m not dead or dying and I’m back here at the rampart’s.” Stone goes on to state that, “The same people for two years that were stating [Stone] was a Russian spy working with Julian Assange are now saying [Stone] was involved with the illegal actions at the Capital on January 6th which was a lie and there’s no evidence to prove that.”

Jones then responds, “Why would we destroy ourselves?” to which Stone answers, “Because they hate us and would like to frame us.”  Stone went on to say that the New York Times reports on twitter rumors that reach “critical mass” against conservatives, “facts be dammed.”

Jones further elaborates that many of his own documents were subpoenaed in a similar fashion to Stone’s, to which Stone points out that the last remaining Mueller Report documents on him were unredacted on election day proving he did nothing wrong.  Jones goes on to state that the DOJ was weaponized to take out their political enemies who were targeted regardless of their actual guilt or innocence.

Stone then dives into what went wrong in 2020 so that the elections in 2022 and 2024 are viable.  That Trump won in 2016 because of the alternative media based in the internet.  Stone went on to say that the MSM and half of radio has been consolidated however the other half of radio is considered the last frontier of freedom.

Jones asks Stone what is the course of action to which Stone says that if the blockade of information is not broken than conservatives could not win another election.  That under the current rules of censorship there won’t be the critical mass of public opinion that can change government policy.

Stone’s three steps are: 1st to create free and open platforms that are censorship,  2nd to enact election law reforms to prevent the fraud that transpired in 2020, and  3rd to rid the Republican Party of the RINOs.  The Republican Party is now the party of “America First.” Stone went on to say that Donald Trump’s campaign was so mismanaged the only good part was Donald Trump himself.

Stone stated that Internet censorship was the primary reason why Trump was not successful in 2020.  Other reasons were that Trump Campaign officials squandered the $1 billion raised which could have been used to fortify the gain in minority voters that supported President Trump.  COVID preventing Trump from having as many or as large of rallies to speak directly to his supporters was another factor that hampered 2020 over 2016.

Stone stated that Trump’s strengths are that “he’s a closer” in that he was able to counter-punch and gain ground in the polls right before the finish line.  Jones responded that Trump is a fighter and hopefully after tackling election fraud legislation that he decides to run again in 2024 and that Trump had every right  to challenge the results because the Democrats were going to challenge them no matter what.  Stone responded that’s the example of the two tiered justice system.

Stone went on to mention that their should be a backup plan for the GOP to run in case Trump decides to not run in 2024.  He mentions several conservative republicans that could be an option.  He states that General Flynn should give public speeches pushing the “America First” agenda.   Stone stated that whoever runs in 2024 they need to have the same brass balls that Trump  always had to call things out publicly as he sees them.

Stone concluded the video by a tour of the Nixon Vault which contained memorabilia from many of the national campaigns he partook on.  Stone even showed off some interesting artifacts such as his Richard Nixon bong, highlighting one of the few mistakes the Nixon Administration partook by expanding the drug war.  Other Nixon memorabilia includes his failed 1960 campaign which Stone stated Nixon was accused of holding his punches which lead to his loss.  Memorabilia from the 1964 Barry Goldwater campaign which he stated gave birth to modern conservatism including influencing Reagan to attempt to primary President Ford in 1976 which ultimately laid the foundation for his 198 victory.

Stone keeps the memorabilia from both the victories as well as the defeats to learn from the mistakes and how they could lead to ultimate victory.  If internet and media censorship can be defeated, then in no doubt the success of 2016 can be repeated, otherwise we are doomed to repeat the defeat of 2020.

Interested in more national news? We've got you covered! See More National News
Previous Article AUDIO: Why Are We Governed By People Who Suck?
Next Article GURVICH: Wonder Why They Picked On The LAGOP On Voter Registrations…