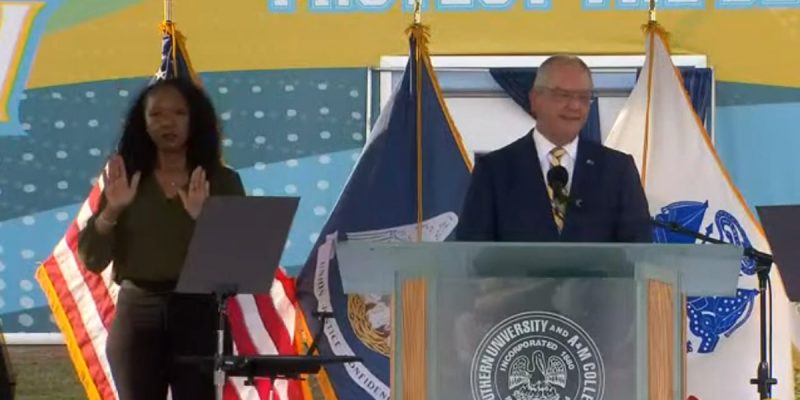 This year’s state of the state address by Democrat Gov. John Bel Edwards illustrates his continued slide towards irrelevancy, both in the reach of his policy agenda and its messaging and in its increasing distance from reality.

The agenda is unambitious. His disinterest in tossing red meat to the political left while simultaneously pretending real problems don’t exist was best exemplified by not even mentioning, after his humiliation on tort reform for individual vehicle insurance last year, a bill by one his allies designed for show on that account that actually likely would create a less efficient insurance market on the agenda he didn’t mention. Yet his address also didn’t mention other genuine vehicular tort reform issues, such as the growing crisis with commercial insurance.

Leaving out this and other things like sales tax administration reform, protection of children from faddishness, and a bare mention on income tax reform, much of what does appears on it piggybacks onto largely non-controversial items and even the recurring liberal wish list items of dealing with illusory pay inequity between sexes and increasing the minimum wage seem almost perfunctory in their presences. Edwards treated these as such by mentioning them only in passing.

And he did that as part of an attempt to weave, throughout much of the speech, items into a continuing emergency narrative caused by the Wuhan coronavirus pandemic (with some bad weather thrown in) that served as a method of historical revisionism. So, concerning the minimum wage he asserted that the crisis more than ever demonstrated a need for hiking that as many of these workers had stayed on the job and in public since the pandemic’s commencement.

Of course, this ignores the overwhelming evidence that increasing the pay floor would cost jobs, and precisely those jobs most needed by those least-skilled workers. Nor would he commit to a certain level, basically pleading to the Legislature to send him something, anything along these lines (spoiler alert: it won’t). This exhortation came on the heels of claiming that Medicaid expansion allowed more people access to more physicians to enable treatment of underlying conditions that might have made them more susceptible to the virus.

This naturally ignores that almost half of expansion users already had insurance, but with expansion they rationally saw their premium costs disappear and then made suckers of out taxpayers to the tune of (latest figure) $312 million a year – of which at least $67 million was wasted on ineligible recipients with the amount going far higher because the state suspended removal of them from the rolls a year ago with the pandemic excuse. And the key word is “access,” because having insurance and wanting or being able to use it is another matter, as many expansion clients reported difficulty in seeing a doctor, with that limited pool that participate in Medicaid overwhelmed.

But, worst of all, what Edwards won’t tell you is about the excess deaths caused by his counterproductive heavy-handed restrictions imposed on the economy. You can have all the Medicaid doctors available you want, but if they weren’t allowed to take patients because of Edwards’ restrictions, and their patients encountered ancillary discouragement caused by keeping businesses closed far longer than necessary and fear whipped up by overboard face covering mandates that made them not want to leave their houses, they let treatable conditions linger and they died from those or from the virus opportunistically exploiting these as a result.

That’s all on Edwards, because he put politics before science that have caused disproportionately more excess deaths not attributable to the virus (as well as have the state in eighth place for virus deaths per capita, behind only several urbanized eastern states and Mississippi). It loosened restrictions more slowly than other states, and even today it stands out as an island with its mask mandate, with the nearest states still having one being New Mexico, Illinois, Kentucky, and North Carolina (hint: the vast majority of states still requiring one have Democrats as governors, and almost no states without one have a Democrat as governor).

And if increased unemployment made more people eligible to fall into expanded Medicaid, guess who triggered that? It takes a lot of chutzpah to claim your policies helped ameliorate a problem when your policies created it in the first place.

In short, because expansion didn’t expand the rolls of the insured nearly as much as advertised, its access was untapped and constrained, and Edwards’ policies further discouraged preventive health care, it likely made little difference during the pandemic. Maybe Edwards “can’t imagine how many more people would have died this past year if not for Medicaid expansion,” but the answer is, not many if any.

(And timing just saved him from further embarrassment. In trying to convince listeners that he follows the science on the virus issue, he exhorted acceptance of vaccinations because “the shots are safe and effective, that’s not coming from me. That’s coming from doctors and scientists and epidemiologists,” the federal government yanked the rug out from under him the next day.)

In the speech, Edwards also tried to brush off the issue 14 months ago he saw as more important than the looming pandemic: climate change. With a straight face, he alleged that trying to bring Louisiana in line with the discredited United Nations/Democrat Pres. Joe Biden goal of eliminating greenhouse gases by 2050 wouldn’t harm the state’s energy industry. Rather, he asserted “we are working with – not against – the energy sector that sustains so much of Louisiana’s economy,” even though he has backed frivolous lawsuits against the industry and did nothing beyond the symbolic to protest Biden’s attempt to stop energy exploration on federal lands.

Finally, while lauding legislation that strengthens protections against sexual harassment in higher education, he hypocritically has put no pressure on his appointees to force appropriate punishments being levied in the ongoing scandal at Louisiana State University, when clearly more than one administrator repeatedly violated policy about which they legally could not have been ignorant. Yet Edwards instead defends this inappropriate discipline out of one side of his mouth while out of the other side talking as if he needs legislation to do the right thing.

As a result, more than chart a future course for the state – and even when it does, in a manner either derivative or fantastical – the speech tries to provide cover for policy failures. Regardless, it reinforces for future policy-making the increasing inconsequentiality of Edwards.

Interested in more news from Louisiana? We've got you covered! See More Louisiana News
Previous Article SCALISE: Democrats Created The Crisis At The Border
Next Article APPEL: What’s The Point Of Tax Reform, Then, Governor?