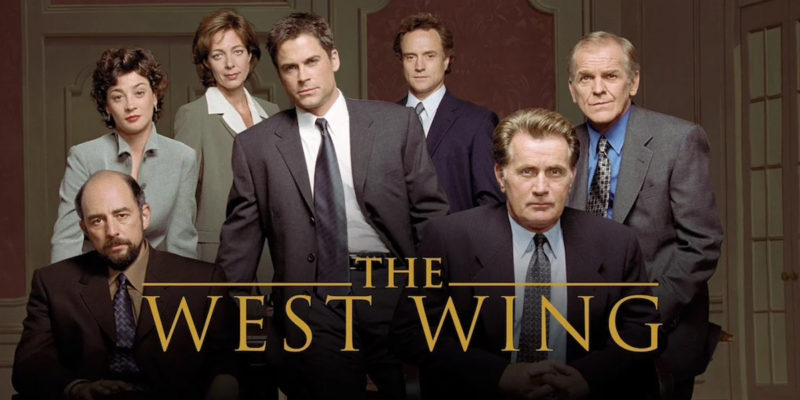 For some reason, Liberals love the TV show The West Wing. It really is a political identifier.

Like the guy mowing his grass while wearing a mask and latex gloves is an obvious giveaway that he voted for Joe Biden. Being a fan of TTW (The West Wing) is to declare ones extreme leftist views. I’m not sure why TWW stands out like this, Hollywood has long portrayed Democrats as heroes and Republicans as villains. Pick out any movie that has American politics as its subject matter and you can be sure that the Republican is an evil guy and the Democrats are the good guys. You’d be lucky to stumble across the exception to the rule.

I’ve never watched it much, but it’s not too hard to figure out the on-going story line of TWW. The Republicans are for the rich, and the Democrat President is always concerned about the poor people, fighting for them. Everything is dramatic and if it wasn’t for the Democrat president who cared about the poor people, the world would fall apart. I’m sure they have him saving us from wars that were started by Republican greed.  Again, I’ve never really watched the show, but Hollywood propaganda is so predictable and the way the Left loves to talk about TWW, the more you can be assured that it reiterates their image of Democrats and Republicans.

There’s an old saying “If you work it hard, it’s easy. If you work it easy, it’s very hard.” This saying can be applied to pretty much anything, if you get up and take care of the things you’re supposed to take care of, things come easy, or at least easier. If you’re not getting up and doing the things you need to do, things get very hard. You can think about all the little things you do at work that if you didn’t do, how hard would your job become? Success is a product of habits, drama is a product of carelessness.

That brings us to the Joe Biden administration, which tries to live up to the drama of TWW, but if the Biden admin were a television series, it would have to star Billy Crystal, Richard Mulligan, and Dinah Manoff. I’m still waiting for that part where Pendejoe gets abducted by aliens and comes back thinking he’s invisible.  The Democrats have become a party that won’t take care of the simple things, thinks everything has to be a drama, and has become a comedy of errors to the rest of the world. As Lord Vader would say about Biden the farce is strong with this one.

And to the American people, this isn’t a hit show. More like a horror show.

Think about just how dramatic things have become between Kamala and Pendejoe. There’s clearly some division between the two, just how severe we don’t know. To channel Maxine Nightingale, maybe those two should get right back to where they started from. Pendejoe should stop singing Je T’aime Moi Non Plus whenever he smells children’s shampoo, and Kamala should stop scaring little children off with her witch’s cackle. Kamala needs to keep an eye on the prize and realize she’s just a failed Hershey bar test away from the presidency. For those of you who don’t know, they stick a Hershey bar in the armpit, if it melts, Pendejoe is still President. If not, we get President Harris.

This administration is becoming the Jerry Springer show of Presidential administrations. Did you know General Milley and Rachel Levine used to be on the same football team? I’m assuming that Milley was the field general (QB) and Rachel Levine used to be his tight end. Meanwhile, this administration takes it’s orders from a guy in the Senate whose followers proudly called themselves BERNIE BRO(wnshirt)S and claim to be “anti-fascist” while siding with the anti-semitic group in congress known as the Squad. Confused yet?  You should be, the collegiate authoritarianist group known as the College Democrats certainly is. While they were busy figuring out which gender is the most discriminated against in their hierarchy of a million genders, they forgot which race and religion is at the top of their hierarchy of minorities. My, have they fallen since their simplified “don’t trust anybody over the age of 30” days.

The Federal Reserve’s answer to inflation is to suggest vegan and soy dinners. Maybe for lent they can have different colors of Soy for us to eat. I want the Soylent Green flavor. Everyday they out crazy the day before. I half expect them to tell us the reason people are choosing to bicycle to work is for health reasons and not due to the rising gas prices. On the next Pendejoe Springer show, we’ll introduce you to a man who cheated on his wife with his brother’s widow and cheated on his brother’s widow in Arkansas with his baby mama while on a crack binge in a strip club. Oh wait, that Hunter Biden episode already aired. Well, here’s to hoping that the next episode Pendejoe gets reunited with Corn Pop. Maybe for extra umph, Lucky the leprechaun and Cap’n Crunch can come on the show. Wouldn’t that be a snap, crackle and pop?

Unfortunately this isn’t a dramedy, this is the state of our political world.  I thought things were bad enough when Louisiana had a governor (no relation) who couldn’t even pronounce her own last name correctly. Seriously what language is it pronounced Blanko? I don’t call Pierre Mr. LeBlank.  I understand that many people don’t pronounce it correctly, but when it’s your own last name and you’re the governor, shouldn’t you know it? That was then, this is now, and right now, I’m just hoping somebody wakes me up in three years and tells me it was all just a terrible nightmare.