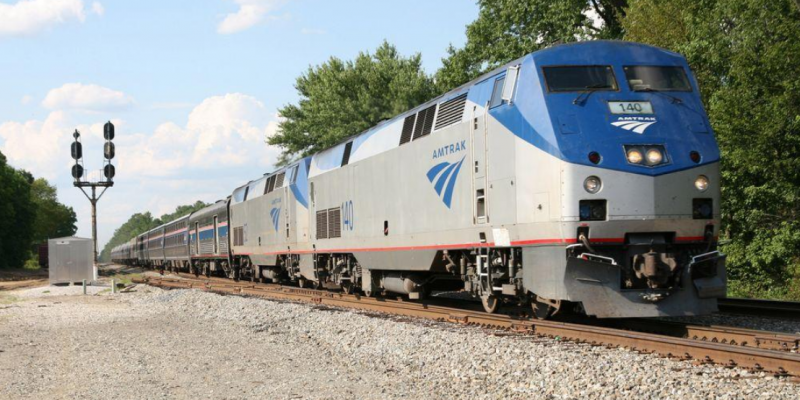 …from Baton Rouge to New Orleans that the Usual Suspects are bound and determined to inflict on you. The train will be an unmitigated boondoggle, and it will draw virtually no ridership at all and lose money hand over fist, and any intelligent maker of public policy would have forcefully rejected it years ago.

But this bad idea will not go away. It is going to happen, and the hundreds of millions of dollars in studies, graft, construction, graft, operating costs and graft that it will inflict upon the public cannot be avoided.

Thanks to the corrupt imbecile Joe Biden being elected and the kleptocratic Democrats who combined with weak Republicans to pass the trillion-dollar infrastructure bill, there is now funding for the train. So all of the political hacks and hangers-on are getting together for the smorgasbord of your tax dollars to come.

A press release from yesterday…

Passenger rail on its way to reality for SoLA Super Region

Passenger rail service between Louisiana’s two largest cities would follow Canadian Pacific’s approved control of the track, as proposed in the pending Canadian Pacific-Kansas City Southern merger application, and completion of necessary infrastructure improvements in conjunction with stakeholders.  At today’s event, Clements expressed the willingness of Canadian Pacific Railway to open capacity of a Canadian Pacific-owned track to an initial one round trip per day; increased capacity could be accommodated depending on available funding for required capital improvements.

“We are absolutely committed to working with the freight and passenger community,” said Governor Edwards. “I stand here to welcome Canadian Pacific to Louisiana and look forward to having a long, successful relationship with them. Now is the time to think big for transportation in our state.”

After the acquisition, every Class I railroad that operates in the United States will have a presence within Louisiana and at the Port of New Orleans. CP has been the industry leader in operating Amtrak in the U.S. for the past six years, and it is the top-rated freight line working with passenger rail in the country. Clements highlighted Canadian Pacific’s longstanding leadership in passenger rail delivery, while highlighting institutional priorities of safety, accessibility, and sustainability.

Erin Monroe Wesley, 2021 Chair of SoLA and Southeast Vice President of Government and Public Affairs for Cox Communications, said, “According to a 2019 poll, 85% of respondents are in favor of passenger rail service between New Orleans and Baton Rouge.”  She elaborated on the invitation extended by SoLA to Canadian Pacific representatives to review passenger rail priorities, leading to today’s event.

Passenger rail between Baton Rouge and New Orleans has been studied extensively.   A poll conducted of 1,050 registered voters from Ascension, East Baton Rouge, Jefferson, Orleans, St. James, and St. John Parishes in February and March of 2019 demonstrated that 63% of regional residents are interested passengers.  Expanded passenger rail capacity will be studied and implemented as customer demand and needed line upgrades are understood.  Analyses will be performed as quickly as possible to get the infrastructure up to capacity to support a second train pair that would not interfere with existing freight service on the line.

Vast expansion of passenger rail funding is included in the recently passed Infrastructure Investment and Jobs Act (IIJA), offering $66B in total for rail and multiple relevant programs, such as Federal-State Partnership for Intercity Passenger Rail grants.  The IIJA will supply funding for Amtrak to further its 15-year corridor vision plan, which envisions routes accessing additional communities and specifically identifies passenger rail between the Baton Rouge and New Orleans metros as a service corridor.  Amtrak’s plans outline its goal to carry 20 million more passengers by 2035.

The SoLA Super Region Committee has long advocated for passenger rail service between Baton Rouge and New Orleans as a priority for economic competitiveness, business and talent attraction, and disaster preparedness, and today’s commitment by Canadian Pacific Railway advances this regional effort.

“This is a real exciting day for our region and for our state,” said Walt Leger with New Orleans and Company.

“I stand here today to welcome Canadian Pacific as the future owner of Kansas City Southern to Louisiana, I look forward to a long and mutually beneficial and prosperous relationship with them,” said Governor John Bel Edwards.

At a press conference Wednesday, it was announced Canadian Pacific is expected to take over the rail line between New Orleans and Baton Rouge. It’s expected it’ll take about $262 million in upgrades, but once complete, the hope is that section would turn into a new way of travel for the area’s residents.

“We’re talking about life-changing business opportunities, new job opportunities, expanding people’s horizons and futures, this is a real opportunity to be transformative for our region,” said Leger.

The thing to understand about this is you have this railroad attempting to put together a merger and they’re trying to ward off the inevitable political opposition from the Left, so the easiest thing for them to do is to say “Sure, we’ll let you run passenger rail on our line if you’ll play ball with us and you pay us for our trouble.” And that’s what’s going on with Canadian Pacific.

Note that what they’re committing to is a once-daily round trip of the passenger choo-choo line these “economic development” professionals are asking for. That doesn’t affect their freight timetable, so it’s a small financial win for them as well as a big PR win that allows them to do things like merge with Kansas City Southern and great an even more oligopolistic railroad industry – something the Liz Warrens of the world would otherwise throw a fit about.

And if the suits at Canadian Pacific have to mouth the words about how awesome they think passenger rail is, they’ll do it. But don’t kid yourself – nobody in the American railroad business thinks passenger rail is a winner. They know it’s an obsolete, 19th-century modus operandi which outside of a few isolated cases is not marketable in the 21st century. The people who love passenger rail are academics, neocommunist “urban planners” and hacks looking for graft money.

We’ve talked about this a million times, including an exposition on why this will be obsolete before it’s ever operational (if it isn’t already), but let’s just go back over why this is an idea so dumb it has to come from politicians.

First, that train will not get you from Baton Rouge to New Orleans, or vice versa, faster than taking a car will. It isn’t high-speed rail, and the KCS track they want to put it on isn’t capable of carrying a high-speed train. Not to mention the fact every description of this boondoggle we’ve seen involves building train stations at a half-dozen places along the line, which means the train will stop every 15 miles or so and never get up to the speed you’d travel consistently if you were driving. Why anybody would waste an extra half hour or 45 minutes just so you could ride a train is beyond us.

Second, it won’t be cheaper to ride the train than to drive. To drive you’re paying for a quarter of a tank of gas, and maybe something for parking. To ride, you’ve got gas money to get to the train station, plus you’re paying to park your car, then there’s the price of the train ticket, then you’re paying for ground transportation at your destination. There is no way they’ll price train tickets cheaply enough to make the economics work for you.

Third, the cheaper the train tickets, the more it’s assured that your first ride on that train will be your last. We continue to be amused at these naifs who run around talking about how “Oh, the train will be awesome! We can take it to New Orleans to go drinking, and then ride it back afterward!” Believe us, the first time anybody does that, assuming the train would ever make a wee-hours return trip to Baton Rouge, their experience will be suitably awful to cure them of any desire to do it again. Nothing good happens on public transportation past midnight, whether it’s knife fights, gang rapes, armed robbery or various other horrors. And running passenger rail between two of the top 10 most prolific murder capitals in America will almost assuredly produce the same kinds of expositions as seen recently in South Philadelphia, when passengers captured exquisite video of five men raping a helpless woman on a train. Nobody bothered to actually help her, and nobody will when it happens on the BR-NO (Burno!) train.

But hey – at this point, the people bound and determined to stick their fingers in the taxpayer pie and pull out all the juicy plums they can find appear to have won. They’ve managed to win the argument not by force of reason, but simply by hanging around long enough that the opponents grew weary and quit. It’s like trick-or-treating – knock on enough doors and sooner or later someone will have a Snickers bar for you.

So just make your peace with the fact that these morons will set some large part of a billion of your tax dollars – if not more – on fire. It’s going to happen, after more than a decade of bad, dishonest arguments. Rather than bemoan it, just wait for the results. They won’t be good, and then we’ll be able to loudly proclaim “We told you so!”

And then demand that the people responsible for it have this boondoggle hung around their necks and be permanently discredited and banned from ever making or affecting public policy again.