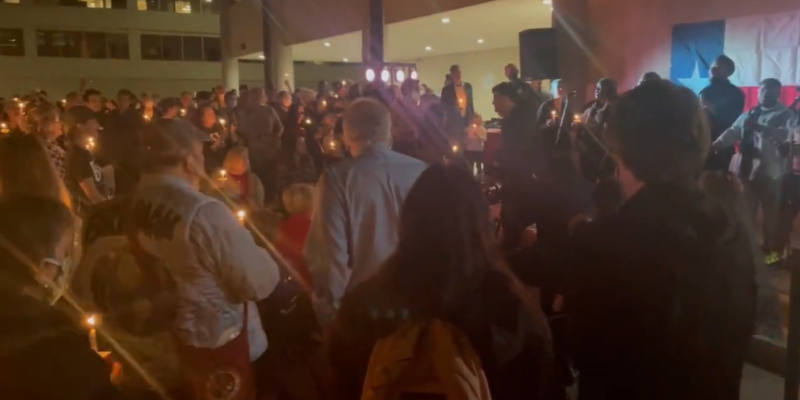 During the Austin leg of Beto O’Rourke‘s Keeping the Lights On tour, the Texas gubernatorial hopeful whipped out the latest run in the Democratic playbook:

A candlelight vigil over a small amount of deaths.

Following his speech outside AFL-CIO headquarters in downtown Austin Wednesday night, O’Rourke was joined by a choir who led the small crowd and a throng of protesters in a rendition of “Lean on Me,” as supporters held candles. Click here to watch video via Twitter.

A 7-member choir kicks off Beto O’Rourke’s rally singing “Lean on Me” in Austin as attendees hold candles in remembrance of the lives lost in the brutal Texas storm just one year ago. #TexasPolitics @YahooNews pic.twitter.com/enqgmqt9xl

“Keeping the Lights On” is a reference to critiques that Gov. Greg Abbott is somehow responsible for allowing the state’s power plants to fail in certain places. Abbott has said in previous months that Texas was prepared for another cold winter. A cold snap late last week was not significant enough to boost the narrative that Abbott oversaw a failing power market. 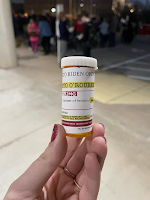 Abbott-affiliated protesters at the event handed out empty prescription pill bottles drawing attention to the Democrats’ alleged role in failing to contain the spread of Fetanyl across the U.S.-Mexico border. Overdoses of Fetanyl now claim around 100,000 deaths annually per CDC.

O’Rourke is the clear favorite in the Democratic heat, but is opposed by Inno Barrientez, Joy Diaz, Michael Cooper, and Rich Wakeland.

From the hip: Any number of deaths from a weather-related disaster is nothing to dismiss or laugh about. The melodramatic mourning over relatively small amounts of deaths, however, comes across as ingenuine to anyone doing the math (especially when compared to the opioid crisis).

Democrats have capitalized on framing Republicans as responsible for COVID-19 fatalities — this may have worked in certain corners of the nation as a campaign strategy. But crying over not even one death per Texas county will only work on audiences already predisposed to bag on Republicans for any and all real or imaginary reasons.

Since Team Beto is being so ridiculously petty, allow us to take a minor swipe: the choice of yet another overplayed spiritual song is not going to sway faith-based voters who know good and well these people don’t regularly sing hymns. Beto supporters should be embarrassed for this and many other reasons.

This article originally appeared in The Travis Tracker.

Interested in more news from Texas? We've got you covered! See More Texas News
Previous Article SADOW: Louisiana Democrats All In On Litigating Their Loss
Next Article The Producer Of Gary Chambers’ Senate Ads Was Busted For Sexting A 14-Year-Old