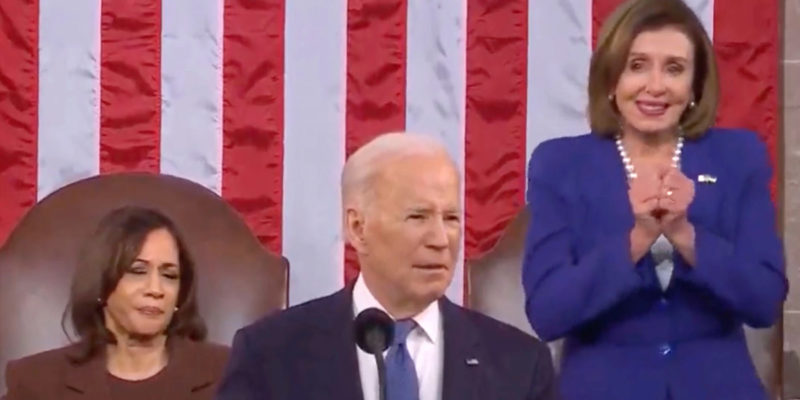 Yes, of course, we’ve been beyond that point for a long time. Everybody knows that Nancy Pelosi is a creep of the first magnitude; that incontrovertible fact was well established 15 years ago when she first ascended to the job of Speaker of the House following the 2006 midterm elections. She lasted four years before the American public lustily turned her out of power in the 2010 Tea Party revolution.

A healthy Democrat Party would have found newer, fresher leadership in 2018 when their congressional fortunes changed. It might have been possible for them to hang on to a House majority beyond this fall’s elections if they had. But the Democrat Party is not healthy. It’s a party by and for losers and creeps, utterly corrupt and devoid of ideas beyond variations on a single theme – their own aggrandizement through government giveaways and power grabs.

Joe Biden made that clear Tuesday night in the worst State of the Union speech ever given. But as bad as Biden’s rambling, hour-long, gaffe-filled and tone-deaf bout of verbal diarrhea was, Pelosi’s performance was actually worse.

It isn’t like the Speaker of the House has much to do during a State of the Union speech. She just has to sit there and attempt to look serious and sane. But that is beyond the capability of Nancy Pelosi at this point in her life. For an hour she looked like somebody under a 72-hour hold at the county mental health facility.

And it isn’t just appearances. It’s how Pelosi runs the House of Representatives. This Jan. 6 commission she stocked with loons and traitors is still in business, well after it should have issued its final report. In all likelihood that commission, chaired by the talentless Bennie Thompson of Mississippi, will only go away when Pelosi’s majority goes away. It can’t close up shop because it’s been tasked with the impossible – conjuring up a revolutionary conspiracy surrounding the Jan. 6 protests. Were there one the FBI would have found it when it sweated hundreds of regular Americans whose only crime was to be suspicious enough about the irregular 2020 presidential election as to come to Washington to protest its congressional certification.

Hopefully that commission won’t be shut down before the new GOP majority takes over the chamber, because when the Republicans go in they’ll want to restock it with their own people and make some changes to its portfolio – namely, that it will turn its eyes toward Pelosi and her decision not to beef up security at the Capitol given the mass of people who were due to be there, her use or abuse of the Capitol Police, the killing of Ashli Babbitt inside the building that day and the taking of hundreds of what can only be described as political prisoners who are still rotting in DC prisons more than a year after the fact.

Pelosi is the single most responsible person for the razor wire fencing and National Guard presence around the Capitol following Jan. 6, something which persisted throughout much of 2021 and made a return in advance of the State of the Union speech. That’s a disgraceful show which marks her as unfit to run the People’s House, and after months of grumbling, the GOP leadership finally decided to make an issue of it…

“It has been 719 days since Speaker Pelosi closed the People’s House to the public. This far exceeds the amount of time of any prior closure over the course of the Capitol’s more than 200-year history.

“Across the country, places have reopened, including businesses, stadiums, museums, and nearly every single statehouse. The United States Senate, on the opposite side of the same building, first resumed limited tours months ago and made the decision to further expand access to tours later this month, even prior to the passage of yesterday’s resolution, and yet the People’s House remains closed.

“Just last night, the President himself said ‘COVID-19 need no longer control our lives’ before a crowd of hundreds of people in the House Chamber but that is not the reality on the House side of Capitol Hill.

“We proudly consider this a government of the people, by the people, and for the people. But to truly serve the people, we must make this institution accessible to the public. Today, we stand united as House Republicans to deliver a clear message to Speaker Pelosi – reopen the People’s House today.”

We all know about Pelosi’s personal corruption, from shady individual dealings to that mini-scandal when she pulled rank to get a hair appointment in locked-down San Francisco. She might be the most loathsome human being ever to sit in the Speaker’s chair, which is saying something considering that Denny Hastert held that position.

It’s time for her to go. Hopefully when she’s thrown out as Speaker by the American people this fall it’ll be the end of her political career and she’ll retire from public life altogether.