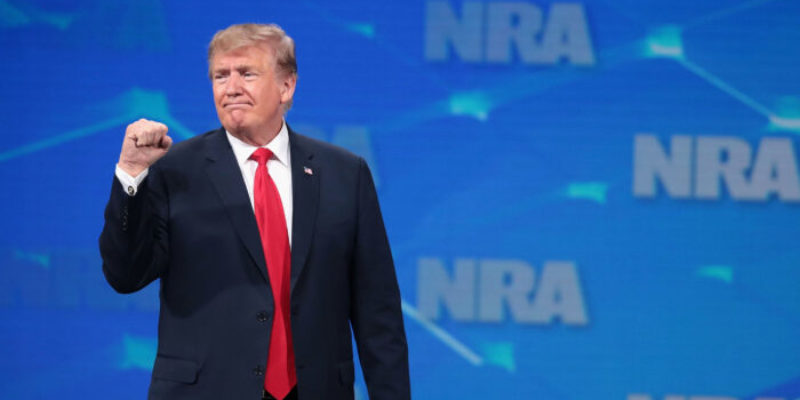 Donald Trump appeared as scheduled Friday at the National Rifle Association’s annual convention in Houston, a city 280 miles east of Uvalde, where 19 children and two adults were killed by a gunman at Robb Elementary School earlier this week.

“Unlike some,” Trump said, “I didn’t disappoint you by not showing up.”

The innuendo was directed at Texas Governor Greg Abbot, who canceled his in-person speech and opted to release a pre-recorded video in which he repudiated any sweeping gun reform.

The quintessentially candid Trump not only addressed the tragedy in the here and now, but also in terms of the afterlife, an eternal, divine scope that brings God into the moment.

“The monster who committed this crime is pure evil, pure cruelty, absolute pure hatred,” he said. “And while those he slaughtered are now with God in Heaven, he will be eternally damned to burn in the fires of hell.”

See, many people don’t like Trump because he’s so rough around the edges. But for people who live in a mindset–and a soulset–of God and societal sin, he is simply a man, yes a sinful one himself, who doesn’t run from the insidious truths about our world. Just take his chilling war against child trafficking and torture, for instance.

It is all sharp rhetoric, yes, and I mean “rhetoric” in the classical sense, not the modern popular sense; it is also, however, something that absolutely needs to be on the minds of every individual alive today–eternity. America’s rejection of God, on the whole of course, in everyday affairs does not mean his indissoluble presence has gone away. Trump spoke to that, and I believe this is the kind of talking point that is needed so much more in our political landscape and from our leadership.

Even Trump’s address of the “other side” in this gun debate confesses a rooted understanding of life after death and the influence of evil on our world.

“There is a grotesque effort by some in our society to use the suffering of others to advance their own extreme political agenda. Even more repulsive is their rush to shift blame away from the villains of mass violence and to place that blame on the shoulder of millions of peaceful law-abiding citizens.”

I used quotation marks around “other side” above because this false binary is purposely set up when media, government leaders, and people in general couch an argument against the other as though their can be only two sides to this issue. A simple look at CNN’s headline this morning spotlights the subtle but effective propaganda constantly being rammed down our throats:

This is a false binary, or the logical fallacy of “either-or reasoning.” This cunning tactic may seem unimportant and random, but the truth is that it is straight from the playbook by Saul Alinsky, a radical leftist who wrote Rules for Radicals in the mid-twentieth century, a radical Hillary Clinton wrote her dissertation on.

We hope to publish an article soon on the Alinsky playbook, so that readers can see for themselves exactly how this plot works and how deep and patient it is.

It is why blacks and whites are constantly being pitted against each other. Or criminals and police officers. They force you to pick a side. This is a false argumentative premise that is one of the central reasons why our nation continues to spin in a rut.

If more people were educated on these things instead of critical race theory or the latest restroom etiquette, we would be in much better shape as a society. As an aside, I am proud to say that I do teach these ancient rhetorical premises in my high school classes at South Beauregard High School.

And trust me, the kids get it. They understand it. They just have to be gently pulled out of their slumber and what exactly it is media and the government do to us.

The bottom line truth to the matter is that yes, it does all boil down to a binary, but that binary is not (or shouldn’t be) gun-lovers vs gun-haters. The true binary that people are distracted from by all of this simplification of classical rhetoric and propaganda both in the media and in government is what Trump seems to understand–

The true war is good vs. evil.

That is the clash. Not anything else. We have a spiritual rot problem in the world, in particular America. Not a gun problem.

Interested in more news from Texas? We've got you covered! See More Texas News
Previous Article SADOW: Schroder Should Extend Louisiana’s Defenses Against The Woke
Next Article ALEXANDER: On Oil And Gas, Biden Says The Quiet Part Out Loud