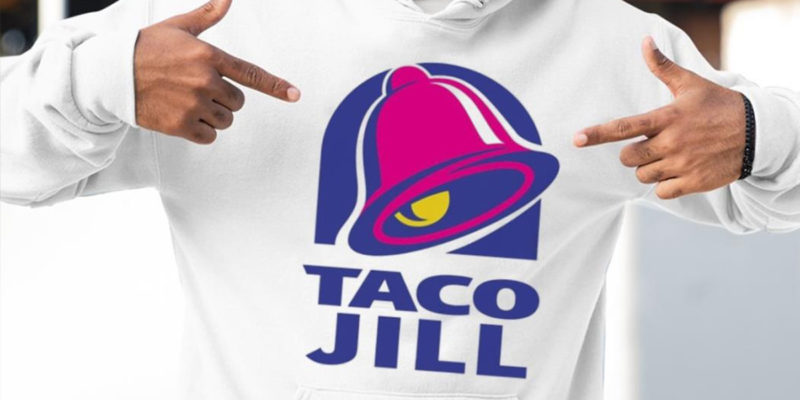 I’ll be honest, I personally am not that offended that Jill Biden thinks of me in terms of a taco, after all, I do think of myself as quite delicious. I’m warm-hearted like a big plate of enchiladas, kind of fat like a perfect burrito, and I’m as sweet as a honey smothered sopapilla. Come to think of it, I’m not just a taco, I’m a meal. Let’s look at this another way, what if we said Jill Biden was like that dried up old hot dog clinging to Pendejoe’s coattails that nobody noticed, and now we do. Nothing wrong with a good old fashioned all-American hot dog, is there? No reason to get offended.

In most normal years, this gaffe by Pendejill would normally have been swept underneath the rug, ignored by the Latino press, and most Latinos would have most likely shrugged it off, after all, we’ve been a people that’s been buying up the fear of racism that the Democrats have been selling. Vote Democrat because the Republicans want to send us all to Mexico. The imagery the Democrats paint for Hispanics is one that’s devastating. We’d get sent back just because our skin is too brown, it doesn’t matter if we were born in East L.A. or South Tijuana, we’re not wanted so bye bye. But this isn’t a normal year.

At the close of the year, we wrote Ten Reasons Why Latinos Are Leaving the Democrat Party, and our opinion hasn’t changed. In fact, we’ve become more bullish. One of those reasons cited was that Latinos tend to have a strong work ethic. It’s a work hard, play hard mentality. They’ll go to work in the morning, do their work quickly with quality, then come home, BBQ, drink beer, and enjoy life. Latinos work hard and enjoy life, it’s a pretty simple philosophy. When Covid came along, that simple philosophy was disrupted and left a lot of Latinos angry at Trump. Meanwhile, the Democrats come into power and continue to force people to stay at home, continue with Covid regulations, and expand it for another year. The message was clear, if Trump wasn’t the problem, then the Democrats were.

All the reasons in that article still hold true today. Latinos understand the cartels and gangs don’t just brutally murder, they make the corpses disappear so that they are never found, if they want to. When the corpses are found, it was intentionally left that way. Latinos understand the importance of border security, and Border patrol along the border is dominated by Latinos.

Most Latinos would shrug off LatinX, when you explain that it’s to make the language gender neutral, you’ll get laughed at for your stupidity. Regardless of political affiliations, LatinX doesn’t resonate and when it’s explained it’s rejected and laughed at for its stupidity. It didn’t move inside the Latino community for its stupidity but push it as a solution when Latinos are faced with serious economic issues, and you become part of the problem.

Let’s look at this another way. Some white people (Left-wing) insist that all white people are superior because of their skin, but some white people (leftist) are more superior than other white people because they are willing to acknowledge their superiority. In order to make things fair, they would have those other white people surrender things so that minorities can benefit because in their inferiority are unable to succeed because of white people. Of course, this will all be overseen by the superior of all people (white leftist) so they can’t give up their role as our superiors, because without them to explain racism to the rest of us, how can things become fair?

At least that’s the way “white privilege” is coming off to some of us in the minority community. Most minorities don’t harbor hate in their hearts because of somebody’s color of skin. That’s a Democrat pushed agenda, and recently that agenda has pushed minorities away, especially Latinos who usually have both Black and White people in their families.

And that sums up “Latin X”. Latin X is an out of touch White Liberal who thinks they are morally superior to everybody else, including minorities, and that we need them to come fix our language for us. The Latinos who are embracing Latin X, which is few and far in-between, are usually brown skinned people who take pride in being Latino when it’s convenient, but don’t take enough pride to travel to a Latin American country, to learn to speak Spanish, or even to take the time to learn about the culture.

Here’s the real problem, gas is still too expensive, food is too expensive, price of everything is still going up and when we look to Washington D.C. for answers, all we’re getting is gaffes and excuses. So, they send Jill Biden down to San Antonio for what? To tell us we’re “Incluxed”. Included in the suffering? Included in the poverty? And what kind of compliment is calling us “breakfast tacos” anyway. That little coattail riding hotdog needs to get all Kate Bush, run up that hill and cry in Pendejoe’s arms. We have some serious problems out here and the middle class is hurting financially. It’s not just the “Latinx” community, it’s the white community, it’s the black community, it’s the Asian community.

And there is the core problem. People aren’t willing to have starvation forced onto them for politics. Pendejoe and the Democrats are losing people on the daily at this point. It shouldn’t be a question before mid-terms if you’re going to run for re-election. It shouldn’t be an issue where the majority of Democrats don’t want you to run again— BEFORE the midterm elections have arrived. Pendejoe and the Democrats seem to think the only problem is their messaging, but despite that, Pendejill’s speech was prepared in advanced, and less than 48 hours later, both Kamala and Pendejoe have another set of gaffes to contribute. I’m pretty sure Hunter is clean and sober because everybody else in the White House cabinet seems to have confiscated his stash and crackpipes.

If Pendejoe and the Democrats think they have a messaging problem now, wait until after the mid-terms. Bill Clinton understood one thing. It’s the economy stupid. It’s not the messaging, but the messaging does need a lot of work.