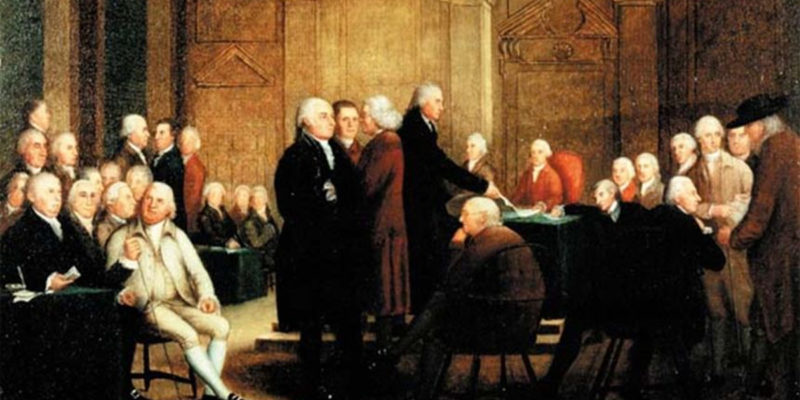 One of the conversations that we are failing to have enough of in our great country is, “What are rights?”

Our Rights are central to our form of government. Our Constitution is there to protect our rights as citizens. We have people decrying that their “rights were violated,” from time to time, but when was the last time you heard people discussing what exactly are Rights and where do they come from?

For this answer, we need to look at 1776. When Thomas Jefferson wrote the famous words down “We hold these truths to be self-evident, that all men are created equal, that they are endowed by their Creator with certain unalienable Rights, that among these are Life, Liberty and the pursuit of Happiness.” he changed the course of human history.

Up until that point, Rights were seen as belonging to English citizens and coming from King George. The problem with this was that American colonists were not considered Englishmen and instead were considered English subjects, therefore, their rights only existed with the approval of King George.

When Jefferson wrote those words, he changed the debate as to what rights were and where did they come from. Those rights, according to Jefferson’s Declaration, came from “our creator.” For the first time, we recognized that they came from God and because of this, they belonged not just to Englishmen, but to all men. While some would point to Jefferson’s ownership of slaves, it’s also important to note that he tried to abolish slavery when he wrote the Declaration of Independence.

This was an important discussion during the debate over the Declaration of Independence and set the basis for the United States Constitution.  This must be an ongoing discussion in our society. The more people understand that rights come from God, the more secure they are. If we are electing people to office that don’t understand that rights come from God, we are putting them at risk.

Those words in the Declaration of Independence, “endowed by their Creator,” that you have a right to life (and with it, a right to self-defense), Liberty, and the pursuit of Happiness (you are not guaranteed Happiness, just the right to pursue it).

If this comes from God, wouldn’t those rights belong to every single human being simply by being born? That whether you are born in the United States, China, Russia, Ghana, or Cuba, it wouldn’t matter. Governments don’t grant rights, they either acknowledge what already exists or they infringe on them. We are not granted our rights because we’re American citizens, we are fortunate enough to live in a country where the government acknowledges that our rights come from God.

So why would Brittney Griner’s rights matter while she’s in Russia? Does she not understand that they may not be recognized in lands outside of the United States jurisdiction? Russia’s system does not require “Miranda rights” be read to her. Are we to go to war with every country when a U.S. Citizen breaks the law of another country and demand their rights be acknowledged? Brittney Griner isn’t the first American to go overseas, break the laws of another country and then wonder at the resulting treatment.

This is one of the reasons America is such a great country. We may not be perfect, but we are one of the few countries that acknowledges that rights come from God. We live in a country that does it’s best to protect the rights for as many people as possible.

This is one of the many reasons why it is important to acknowledge that rights come from God. If they come from the Government, then simply by changing the government, or changing the land, they’ll no longer exist. They would actually be privileges.  Understanding what rights are means you acknowledge that they come from God and that they are absolute. They are not “granted” or “denied,” they can only be “infringed upon.” That the United States Government acknowledges those rights as belonging to you, but in other countries you may have them infringed on with impunity.

The more people understand that Rights come from God, the more secure our nation and our people will be.