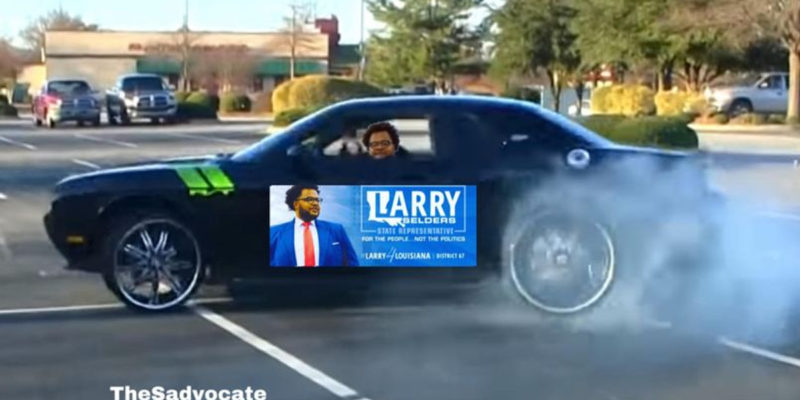 It happened over the weekend, and with all the preparations for our Hayride event in Metairie that happens tonight I didn’t get a chance to post about it, but yes – we should have a word about the Fast and Furious re-enactment that state representative Larry Selders thought it would be a good idea to put on.

A Louisiana state representative was arrested for DWI on Sunday, Aug. 21, according to Louisiana State Police.

Reports show Selders was seen driving at a high speed, producing a burnout with his vehicle on E Boyd Drive near LSU around 2 a.m. Sunday.

According to reports, troopers suspected impairment and gave Selders a series of standardized field sobriety tests. He was then taken to the LSU Police Department for a chemical breath test, which came back over the legal limit, according to investigators.

Selders was taken to the East Baton Rouge Parish Prison to be fingerprinted and was released on a summons, officials said.

I’m not going to do the holier-than-thou thing with Selders. I’ve never gotten pinched for burning rubber on a residential street, but in my 20’s I didn’t make altogether wise choices at times.

But to paraphrase Mike Gundy, Larry Selders is a man. He’s 40. You would think he’d have better judgement than to be laying down marks on a residential street close to LSU’s campus on a Saturday night, drunk, while holding a suspended license.

It seems like he realized this was a dumb move, or at least a move that wouldn’t get him good publicity. So we got the “as a father and a husband” post on Facebook when they sprung him from jail… 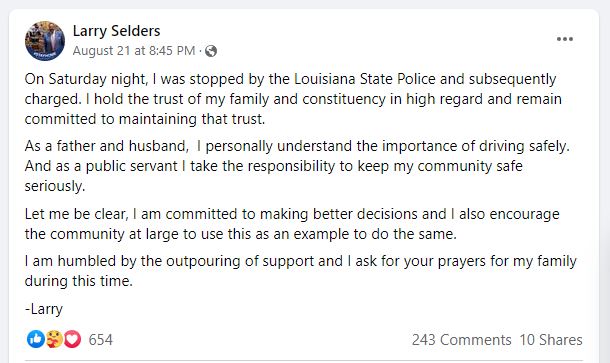 We’re not linking the Facebook post. You can find it for yourself. Those 243 comments are all from people saying things like “Only God can judge” (wonder if any of these people have ever contemplated jury duty) and “you’ll get through this” (of course he will; that’s what you hire a DWI lawyer for, it’ll just cost him six or eight grand) and “takes a lot to admit your mistakes” (a politician who makes the local news because of a spectacular DWI has no choice but to admit his mistakes, for crying out loud).

Not a single comment we saw – though it’s entirely possible they were there and had been scrubbed – about how doing burnouts at 2 a.m. Saturday night on a street lots of LSU students live on is an inherently dangerous and stupid thing, and that if Selders really was committed to safety in Baton Rouge this wouldn’t have been a choice he’d have made.

Does this go without saying? Apparently not, because if it did you wouldn’t have elected officials LARPing as Vin Diesel in their Dodge Challengers.

I’m not going to say Larry Selders is no good or that he has to be targeted for political elimination because of this. Selders’ district would just elect somebody every bit as bad next year.

But I do say that the amount of ridicule heaped on him to date is pitifully small. Only the Sadvocate bothered to go there…

That’s reasonably well done. But it’s all we saw.

And that’s depressing. Expectations are so low that something like this happens and people just shrug and say “Yep,” and then go on Selders’ Facebook page and send him little prayer emojis.

Makes me wonder what the reaction would have been if it was Rick Edmonds or Scott McKnight doing donuts on Choctaw.