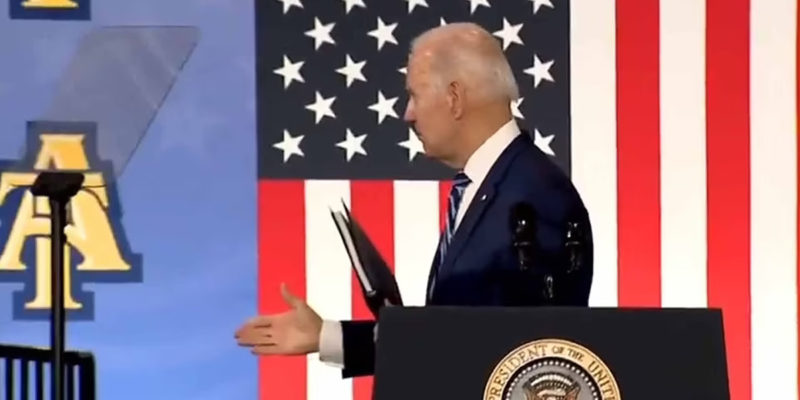 At least that used to be the commonly accepted definition of a national recession, but right on cue Joe Biden called upon his minions to proclaim in unison that no, we were not really in a recession and the economy was actually in pretty good shape. Joe himself made a brief comment to reporters to the effect that it didn’t seem like a recession to him, before fleeing the scene and leaving reporters to devour his easily befuddled press secretary, Karine Jean-Pierre. She promptly declared that “We’re seeing a transition into stable and steady growth…”, but she was clearly way out of her element. In any event, we very much doubt that anyone was paying much attention to her musings on the economy.

But the fact remains that things are clearly not going well- that much is obvious to even the most heedless of our fellow citizens. The state of our economy is volatile and uncertain, and substantial parts of it are performing poorly. Inflation is soaring; energy prices are way, way up; real wages are declining and necessities like food and housing are becoming unaffordable for many, but borrowing money to stay afloat has become more expensive for all.

Many goods are in short supply or are simply unavailable. Employers cannot find workers, yet strangely several million people refuse to return to the workforce despite the fact that there are plenty of jobs to be had. What’s more, the experts don’t know where we are headed: Will this be a relatively mild recession, or is the situation about to get one Hell of a lot worse?

Now this is not a good place to be, and one might well ask how we got here?  But first, allow me to digress for a moment to make a comparison: Recall that less than two short years ago under President Trump, the economy was recovering from COVID, inflation was under two percent, interest rates were near their historic lows, and energy was plentiful and cheap (gas was half its current price). Several COVID vaccines were only months away and our national debt was many trillions of dollars lower than it is now.

So how did we arrive at this sad state of affairs in so short a time? The answer is obvious- only a doddering (but still deceitful) Joe Biden, controlled by the progressive, Neo-Marxist wing of the Democrat Party, could have caused this much damage so quickly and so completely!

Who else would have begun a new presidency by attempting to shut down the eighty percent of our energy production provided by fossil fuels? Who else would have mis-spent trillions of dollars, much of it for Democrat political ends, thereby creating huge imbalances in the supply and demand for our nations’ goods, even though productivity had not fully recovered to pre-COVID levels? Too much money chasing around too few goods is the classic cause of inflation, and reducing domestic energy production even as the economy required more energy, could not help but cause gas prices to shoot up.

So how bad will the economy, and with it the lives of all American citizens, ultimately worsen? Amazingly, a new half-trillion dollar round of spending, along with a substantial tax increase, is wending its way through Congress. (Thank you, Joe Manchin!) The added spending will further stoke Inflation, of course. Unfortunately, higher taxes will cause the economy to contract further, but to tame the out-of-control inflation, the Federal Reserve was forced to raise interest rates another three quarters of a percent last Wednesday. Rate increases will also cause the economy to contract, and worse yet, the Fed hinted at further raises in the coming months.

Thanks to the Democrats, we can look forward to more spending and an even higher national debt, higher taxes, and higher interest rates. Simply put, this is a recipe for what we used to call stagflation. Stagflation, a word which has not been heard in our national dialogue in decades, occurs when an economy is simultaneously suffering from inflation and a recession. Until Jimmy Carter’s presidency, economists thought that it was impossible to screw things up so badly that you could have both inflation and a recession at the same time, but that is precisely where we are now.

So as we  are teetering on the precipice of an unpredictable economic future, be reminded that the gross and misdirected overspending was all avoidable. The attempt to shut down most of our energy production and replace it with expensive and unreliable “renewable” sources was also avoidable. Why were such basic economic mistakes ever made in the first place?

The fundamental reason is that the Democrat Party has been taken over by left wing Marxist ideologues, and these fanatics do not learn and they do not admit the error of their ways, because they are Marxists. If we learn anything from history, it is that Marxists do not learn from history. In fact, they are even now complaining that the problem with our economy is that they have not done enough to transform the United States into a more social democratic, or even an outright Socialist, nation, and they have even bigger plans for our future! But you can resist and ultimately defeat Joe Biden and the Democrats, by voting to save our country on November 8th.

And one more thing: Only the tens of millions of members of the Republican Party have the strength in numbers and in resources to resist the Democrats’ plans. Love and respect for America and its achievements aren’t something to be ashamed of in our party. We believe that parents should control their children’s upbringing, and Americans should be free to live their lives as they choose, with minimal governmental interference. If you aren’t yet a member if our party, please go to geauxvote.com and become a Republican. Most folks can register to vote or change their party registration on the Internet.

If you are already a member of our party, then PLEASE FORWARD THIS ARTICLE TO A FRIEND OR ACQUAINTANCE WHO ISN’T. Time is running out!

Interested in more national news? We've got you covered! See More National News
Previous Article MARSALA: A Bait (Shop) and Switch (to Housing)
Next Article BLANCO: Thoughts On Turning Into A Curmudgeon