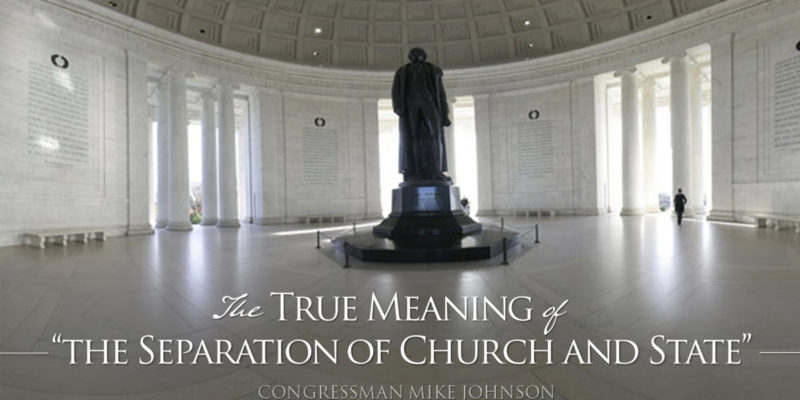 In the millions of exchanges and hundreds of thousands of comments that were generated this week in response to my simple Facebook post warning about the Satanic new animated series by Disney/FX—thousands of people who disagreed with me insisted that I needed to “stop violating the separation of church and state” and “keep religion out of politics.”

My post wasn’t “political,” of course, and it isn’t possible for me to reply to all those comments individually, but I do think the “separation” subject is important to address. In fact, this is one of my favorite topics, as I have debated, written and taught university courses on the issue for nearly 25 years. Practicing constitutional law and litigating religious freedom cases convinced me this is among the most misunderstood subjects in our culture.

Most people today who insist upon a rigid “separation between church and state” are unaware the phrase derives not from the Constitution, but from a personal letter that President Thomas Jefferson wrote to the Danbury Baptist Association in 1802.

He explained that because “religion is a matter which lies solely between Man & his God,” the language of the First Amendment is a vital safeguard for our “rights of conscience.” Jefferson said he revered “that act of the whole American people which declared that their legislature should ‘make no law respecting an establishment of religion, or prohibiting the free exercise thereof,’ thus building a wall of separation between Church & State.”

Jefferson clearly did not mean that metaphorical “wall” was to keep religion from influencing issues of civil government. To the contrary, it was meant to keep the federal government from impeding the religious practice of citizens. The Founders wanted to protect the church from an encroaching state, not the other way around.

The majority of the Founders, having personally witnessed the abuses of the Church of England, were determined to prevent the official establishment of any single national denomination or religion. However, they very deliberately listed religious liberty (the free exercise of religion) as the first freedom protected in the Bill of Rights **because they wanted everyone to freely live out their faith–-as that would ensure a robust presence of moral virtue in the public square and the free marketplace of ideas.**

Volumes written on this topic can be summarized by reference to the sentiments of our first two presidents. In his historic Farewell Address, “the Father of our Country,” George Washington, declared: “Of all the dispositions and habits which lead to political prosperity, religion and morality are indispensable supports.” John Adams warned directly: “Our Constitution is made only for a moral and religious people. It is wholly inadequate to the government of any other.”

What these two Founders and their fellow patriots all understood from history was that there are many important rules and practices that can help build and sustain a healthy republic. But the key–-and the essential foundation–-of a system of government like ours must be a common commitment among the citizenry to the principles of religion and morality.

The Founders acknowledged in the Declaration the self-evident truths that all men are created equal, and that God gives all men the same inalienable rights. However, they knew that in order to maintain a government “of the people, by the people and for the people,” as Lincoln articulated, in “this nation, under God,” those inalienable rights must be exercised in a responsible manner. They thus believed in liberty that is legitimately constrained by a common sense of morality–-and a healthy fear of the Creator who granted all men our rights.

The Founders understood that all men are fallen and that power corrupts. They also knew that no amount of institutional checks and balances or decentralization of power in civil authorities would be sufficient to maintain a just government if the men in charge had no fear of eternal judgment by a power HIGHER than their temporal institutions.

A free society and a healthy republic depend upon religious and moral virtue—not only because they help prevent political corruption and the abuse of power—but also because those convictions in the minds and hearts of the people make it possible to preserve their essential freedoms by emphasizing and inspiring individual responsibility, self-sacrifice, the dignity of hard work, the rule of law, civility, patriotism, the value of family and community, and the sanctity of every human life. Without those virtues, “indispensibly supported” by religion and morality, every nation will ultimately fall.

Inscribed on the third panel of the Jefferson Memorial here in Washington, D.C., is his sobering reminder to every American: “God who gave us life gave us liberty. Can the liberties of a nation be secure when we have removed a conviction that these liberties are the gift of God? Indeed I tremble for my country when I reflect that God is just, that his justice cannot sleep forever.”

The experience of history teaches that these principles are universal and timeless, and they certainly apply to our nation today. Alexis de Tocqueville is credited with the keen observation that “America is great because she is good, and if she ever ceases to be good, she will cease to be great.” That has been the key to our exceptionalism. Our republic depends upon it now more than ever, and it is our job to instill and preserve it.

We must defend truth on every front, repair our foundations, and hold fast to who we are and what we stand for. If anyone tries to convince you that your Biblical beliefs or your religious viewpoint must be separated from public affairs, you should politely remind them to review their history.

AND NEVER BACK DOWN.