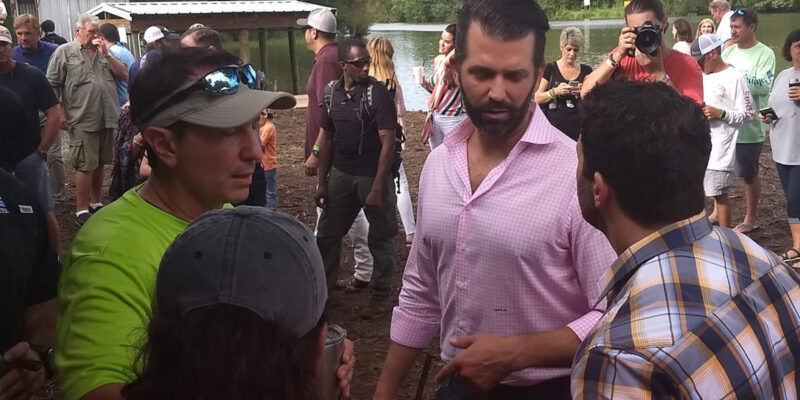 Earlier today, Jeff Sadow noted the possibility of a schism within the Louisiana GOP as the Billy Nungesser-John Stefanski-Clay Schexnayder faction seeks to set itself up as the moderate alternative to the Jeff Landry-Liz Murrill ticket. Sadow included John Fleming as the Landry ticket’s Lt. Governor candidate, and Fleming will be speaking at The Hayride’s Nov. 9 event in Mandeville which will also include state representative Larry Frieman and conservative pundit Kurt Schlichter.

It’s even possible that Nungesser won’t actually run for governor, though most indications say he will.

What we do know is that with 2023 being a very light election year around the country and Louisiana’s statewide races being perhaps the most nationally prominent among those to be decided, there will likely be a good deal of attention focused on that governor’s race.

Which is why it was no surprise when Donald Trump, Jr. openly endorsed Landry yesterday.

I’m proud to endorse my friend @JeffLandry for Governor. Jeff is a strong conservative, who will take on out-of-control crime, fix broken schools & bring common sense back to Louisiana. He will make Louisiana great again!!! #lagovhttps://t.co/OCIXwxpNiX

Don Junior has been a regular attendee at Landry’s annual alligator hunt fundraiser for several years; he and his girlfriend, the former Fox News personality Kimberley Guilfoyle, were on hand this year for three days. He’s essentially an insider in the Team Landry camp at this point. So of course he’d make the endorsement.

What’s most interesting about this is its implication.

Because if you just go by Louisiana political history what you see is that the “moderate Republican” crowd, which contains a lot of the party-switchers who used to be Democrats until the Hard Left essentially kicked them out of that party and made them unelectable with “D’s” next to their names but also includes a lot of weak-sauce types, has always played the status-quo game to advantage over the more numerous conservatives.

A few years ago we talked about the 45-15-30-10 rule, which has governed Louisiana politics for a good while. Here’s what it means. The “45” in that rule are the ideological conservatives; they’re the people who voted for David Vitter in the 2015 gubernatorial election against John Bel Edwards and they’re the Republicans who lament the fact that we don’t have party primaries in Louisiana. They’re, as you might expect, about 45 percent of the electorate in Louisiana.

And Jeff Landry is one of the 45. In fact, leaving John Kennedy aside from this discussion (and in the event Kennedy were to decide to get into the governor’s race next year, all of this would need to be recalibrated), Landry has emerged as the current leader of the 45.

But the 45 can’t win elections without the 15. And Nungesser is one of the 15. Those are the “moderates” who generally put themselves down as Republicans though some of them are still registered Democrats. All the usual suspects in Louisiana politics are in the 15 – Jay Dardenne, Bill Cassidy, Schexnayder, Page Cortez, you know who they are. There aren’t many of these guys, who are basically status quo Republicans, but in jungle primaries they tend to do quite well if they can get in a runoff against somebody from the 45 – because, as moderates, they can pull from the other 40 percent.

The 30 and the 10 we’ve been talking about pretty extensively of late. They represent the state’s monolithic black vote (the 30) and the white leftists (the 10) that you’re seeing battle it out for the scraps in Kennedy’s impending re-election. Gary Chambers and Syrita Steib are going to combine for around 30 percent of the vote, perhaps a little more, and Luke Mixon is likely going to do about 10 percent, maybe a little more, while Kennedy gets somewhere between 53 (the 45 and a slight majority of the 15) and 60 (all of the 45 and the 15) percent of the vote.

The fear, if you’re Landry, is that you’d make the runoff against somebody either of the 15 or the 10. What you want is a black Democrat to get into the race so it’s a runoff between the 45 and the 30. You’ll win that every time, largely because despite all the smarminess and arrogance of the white leftists they’re the biggest racists in the state and they won’t do anything to help a black Democrat win, and the 15 might not like a politician of the 45, like for example all the bellyaching you’ll see them do about Landry and how he’s always in court fighting Edwards or pulling “political stunts,” the last thing they want is for the state to be governed by somebody like Chambers or LaToya Cantrell. They might be moderates but they really, really can’t stand the Hard Left, and Hard Left positions is really all you get out of politicians from the 30.

And so far we don’t have a black Democrat in the race – though like manna from heaven there’s a rumor that Louisiana DOTD secretary Shawn Wilson, he of the bright idea to shrink I-10 down to one lane each way through Baton Rouge as part of a grand road construction plan, is considering running. 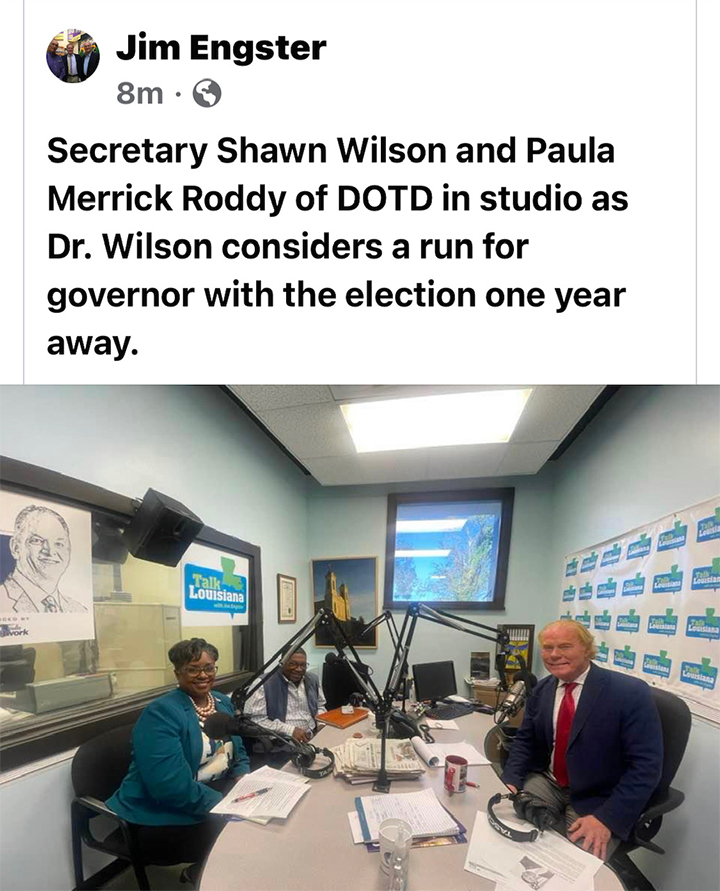 And if that should happen, this thing will be relatively easy for Landry, because his base is a lot bigger than Nungesser’s and Nungesser won’t be able to outpoll Wilson given Wilson’s 30 percent. The odds would have it that Nungesser wouldn’t run.

Assuming that isn’t how it goes and it’s a white Democrat like Jay Luneau or Gary Smith or even Helena Moreno in the race, as the Dems attempt to reprise the 2015 and 2019 cycles with a John Bel Edwards redux, Landry would need enthusiastic support from the 15, or at least something like half of them.

And if he’s in the runoff with, say, Moreno, and he’s got Donald Trump leaning heavily into the race with endorsements and money and Louisiana becomes a playground for every national Republican from Greg Abbott and Ron DeSantis to Glenn Youngkin and J.D. Vance and Rick Scott and Adam Laxalt and Kari Lake to step in for Landry and preach GOP unity, that’s going to be a whole lot of pressure on the 15 to get in line behind Landry.

That’s the import of Don. Jr.’s endorsement. It’s a good bet Team Trump will follow, and if they do, that old “moderate” coalition might then start to look like a NeverTrumper coalition. And NeverTrumper politics in Louisiana just isn’t good politics.

Of course, Eddie Rispone set himself up as Mini-Trump in 2019 and that didn’t work. But there wasn’t much ideological difference between Rispone and Ralph Abraham. In fact, one of Rispone’s attacks on Abraham was that he tried to paint him as a NeverTrumper because Abraham lost his nerve after the Access Hollywood tape popped in October of 2016 and he suggested replacing Trump on the ticket (which wasn’t a shining moment, but honestly, it was pretty forgivable based on how things looked at that moment). The problem there wasn’t the 45 and the 15, it was just a lack of skill on the part of the candidate and his bumbling campaign team.

Landry doesn’t have those problems. Landry’s a good-to-great retail campaigner, and Landry is a dynamic politician who can get headlines and excite his base. He’s also pretty good about hooking local political machines into his team, something he’s been able to do with sheriffs and DAs in a lot of places around the state. Don Junior’s arrival at this year’s gator hunt, for example, coincided with a Law Enforcement Appreciation event thrown on the Wednesday night before the hunt started at which a ton of DAs and sheriffs were in attendance. So he’s a totally different animal than Rispone, or Abraham.

That isn’t to say he doesn’t have some obstacles to overcome. Landry is the most prominent politician in the 45 but he’s still going to need to solidify them, and John Schroder could have some appeal with that group – which is why the Landry-Schroder jockeying will be so interesting over the next few months. And Landry isn’t built to attract the 15, so he’s going to have to find ways to build bridges to them without alienating his base. He also might want to work on the 30; he’s had some success in getting black voters behind him in his previous races for Attorney General, and there are pro-life black voters Landry can make a case to. And he’s already talking about leveraging the power of the state to clean up crime in the cities, which could well resonate in the black middle class.

But locking in Team Trump’s support, which Don Junior’s endorsement is a vital part of, is a big first step in claiming the GOP’s mantle for 2023. Landry has to be thinking it’s a way to turn the 2023 race into a fait accompli before it even gets started.