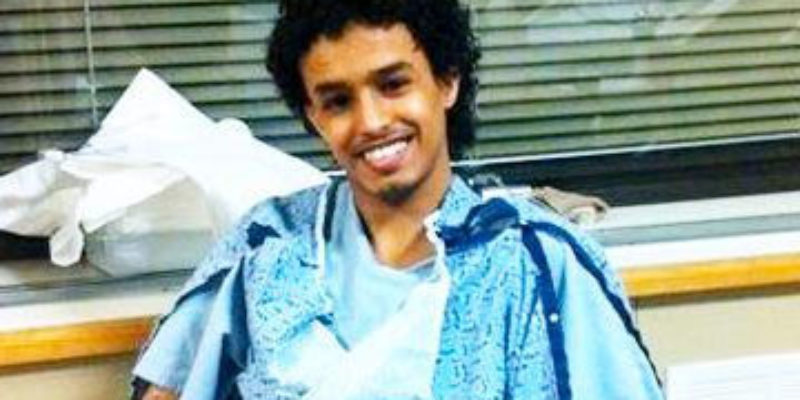 Beck says he has information about Abdulrahman Al-Harbi, the “Saudi National” supposedly detained at a Boston hospital after the Boston Marathon bombing on Monday, which will be tremendously damaging to the Obama administration under the theory that it is covering up and whitewashing the full spectrum of that terrorist plot. And he says on Monday, he’ll go public with the information he has.

The basic gist of this is that Al-Harbi, who is now saying he was never detained and was only questioned by U.S. authorities for a couple of hours before he consented to a search of his apartment in Revere, Massachusetts, outside of Boston, was in fact linked to the bombing and a deportation order was entered for him.

And this is where things could get very, very messy.

First, why would you deport someone who either had nothing to do with the Boston Marathon bombing or was linked to it? If the former, he’s done nothing to merit such unfriendly treatment by the U.S. government. If the latter, prudence dictates he isn’t going anywhere until his involvement has been fully investigated.

Well, this could possibly help to explain it…

The State Department initially provided no reason for the change, which was announced just 15 minutes before the scheduled 10 A.M. session, but media reports have said that a Saudi national in the U.S. on a student visa is a “person of interest” to investigators probing the bombings at the Boston Marathon on Monday.

The person being investigated was badly injured in the attack, sources said.

“Apologies for short notice,” the State Department’s press office told reporters as it announced the change.

Later Tuesday, at the daily briefing for reporters, State Department spokesman Patrick Ventrell said the exclusion of the press from the meeting was due to Kerry’s busy schedule.

“This was just a scheduling change on our part,” Ventrell said.

That met with a skeptical reaction from journalists, who had been advised that the meeting would include a so-called “camera spray” at the top of the session.

“Are you really trying to say that this [meeting was moved from a] camera/photo op to being closed, for scheduling reasons? Is that seriously your answer: that because the secretary was tired after 10 days on the road and is going to the Hill tomorrow?” the Associated Press’s Matt Lee asked.

“What I’m saying is he has a very tight schedule here in the building and elsewhere,” Ventrell said, he said the fact Kerry met with Al-Faisal amidst that busy schedule reflects the importance of the U.S. Saudi-relationship.

“So does it save time somehow, canceling the photo op? It doesn’t wash,” Lee replied. “I find it hard to believe that you expect us to believe that that’s the real reason for this.”

The meeting was not on Obama’s public schedule.

“The president and Prince Saud al-Faisal reaffirmed the strong partnership between the United States and Saudi Arabia and discussed developments in the region, including the conflict in Syria,” Hayden said in a statement.

To say that Obama were to simply poke his head into a meeting Al-Faisal was having with Donilon would be a rare phenomenon is an understatement. That very seldom happens in any administration much less this one.

Something exigent was at hand for Al-Faisal to get audiences Tuesday and Wednesday with the American President, Secretary of State and National Security Advisor away from the media and off the public schedule.

By Wednesday, the reports of this deportation order began to circulate.

And as Beck said, that deportation order has been seen by a half-dozen members of Congress.

One of them was Jeff Duncan, a congressman from South Carolina who challenged Homeland Security Director Janet Napolitano on the subject Thursday and received a sputtering, bombastic and thoroughly nonresponsive answer…

It was that denial which set Beck off and produced his threat to blow the lid off the case on Monday.

Whether Beck has a smoking gun and can fully unravel the story of who Abdulrahman Al-Harbi is and what role he actually plays in this drama is a question we don’t know the answer to.

What is known about Al-Harbi is that he comes from a Saudi clan that is well-known for its support of jihad. Walid Shoebat is an expert on the subject and he has been sounding the alarm all week…

After the bombings, a Saudi by the name of Abdul Rahman Ali Al-Harbi was hospitalized and became a ‘suspect’, then a ‘person of interest’. His apartment was searched by federal and local authorities. No confirmation has been given so far to his involvement. The Media were quick to claim his innocence, of course.

This brings us to the Boston marathon bombings. Foreign Policy is reporting that he’s ‘no longer a person of interest’, which means he’s “innocent”, right?

Perhaps a quick look at the Arabic sources should raise the eyebrows of every American relative to the extent of the problem at hand. Many from Al-Harbi’s clan are steeped in terrorism and are members of Al-Qaeda. Out of a list of 85 terrorists listed by the Saudi government shows several of Al-Harbi clan to have been active fighters in Al-Qaeda:

Then you have Al-Harbi clan members in Gitmo:

There are specific Saudi clans that are rife with members of Al-Qaeda, which makes it quite alarming as to why nearly a hundred thousand student visas are issued to these. Americans are clueless as to clan ties when it comes to terrorism.

Lesson one: Terrorism and crime by the Saudis is interlinked extensively within families, as we see in the Harbi clan.

It does seem unlikely that the Tsarnaev brothers were able to pull off the Boston Marathon bombings based solely on reading about hitting sporting events in Inspire Magazine and learning how to make pressure-cooker bombs on the internet. They clearly had help somewhere along the line, and that would indicate confederates – and a network. Law enforcement obviously believes that’s true; otherwise the feds wouldn’t have invoked the public safety exception to reading Dzhokhar Tsarnaev his Miranda rights and law enforcement wouldn’t have hauled three of his friends off in handcuffs from a residence in New Bedford.

And the presence of a member of one of the most profligate jihadist clans in the most profligate jihadist country on earth at the finish line of the Boston Marathon at the precise time two other jihadists set off bombs there, and that this was a mere coincidence, when the same federal government which seems so intent on clearing him is still aggressively seeking to roll up the rest of the plotters…well.

That’s why the Al-Harbi case is so fishy. And that’s why Beck’s advertised revelations on Monday could be damaging.