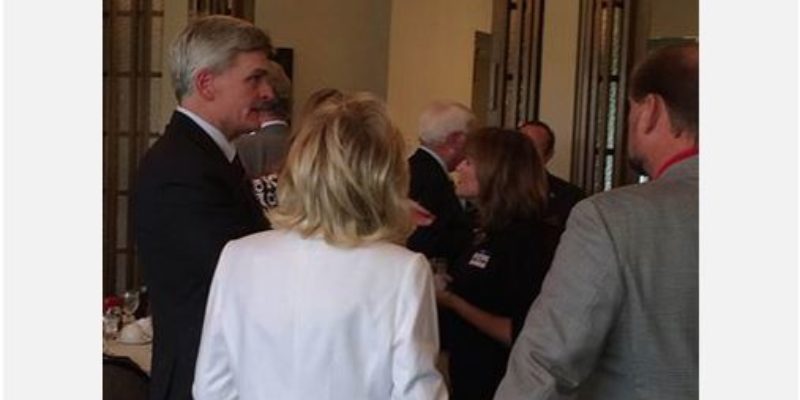 Sarge’s piece today references a column by Jeff Crouere at BayouBuzz complaining about the Louisiana GOP’s endorsement of Bill Cassidy at RLC a couple of weeks ago, calling it underhanded, a back-room deal and so on.

That’s all fine and well and good, but when we discussed the endorsement at the time we said two things: first, that based on a number of dumb mistakes Maness’ campaign made which greatly irritated the folks on the State Central Committee it was inevitable the endorsement would come (and you can’t really blame them for making an endorsement given the fact we have a jungle primary in Louisiana and only a five-week span between the primary and the runoff), and second, that if Maness was going to turn his campaign into a non-stop bitch-fest about how Bill Cassidy is the GOP Establishment’s crooked choice for the Senate then folks like Donald Trump are exactly right in demanding he get out of the race.

Which brings us to today, because last week there was an event put on by the Northshore Republican Men’s Club – the annual Meet The Press dinner – at which both Cassidy and Maness were present (we were supposed to be on the panel for the event but canceled, owing to the fact that we’re boycotting St. Tammany Parish until the politicians there stop their assault on property rights and American energy security).

Cassidy was engaged in something other than meeting the press. He was meeting the folks. And put up a Facebook post to that effect… 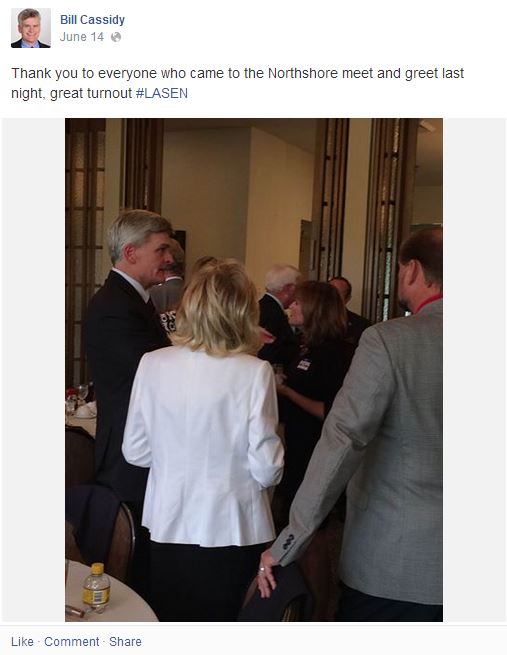 And today, Maness’ campaign unleashed a torrent of howling accusations. Here’s a fundraising e-mail from Michael Byrne, the campaign manager…

The choice in the Louisiana Senate race is becoming clearer and clearer!  Last week, we announced that Rob would cris-cross the state to appear at events from Shreveport to Slidell — including the NorthShore Republican Men’s Club Meet the Press Dinner this past Friday night.

Rob even asked our staff to promote the event to area Republicans to support the work of his local Republican Club which is working so hard to defeat Sen. Landrieu in the primary and the run-off.

But how did Congressman Cassidy play it?  He posted a photo on Facebook implying the event was a “meet and greet” for him.  Cassidy even had the gall to use a photo that showed Rob just a few feet away at his supposed “meet and greet!”

Friends, it’s times like this that show the stark contrast between the politicians and the people.  On the one hand, you see Congressman Cassidy co-opting and misrepresenting the work of a local Republican organization for his own benefit — no acknowledgment of the NorthShore Republican Men’s Club and no mention of the members of the press who took time to appear there.

On the other hand, you see Rob – One of Us! – supporting and valuing the efforts of his local Republican club.

Will Congressman Cassidy hijack another event that Rob appears at this week?  Come on out and see for yourself:

Of course, this schedule of events and more will add over 613 miles to Rob’s truck, so he would be grateful if you chipped-in a few dollars for a gallon or two of gas – even just $3.35 for one gallon or $6.70 for two gallons would be much appreciated!  And if you contribute $10.05 for three gallons, we’ll send you a bumper sticker for your own car!

Show your support for the most exciting and authentic candidate in the race – a true conservative – Col. Rob Maness for U.S. Senate!

This picture was part of Byrne’s email…

OK, stop laughing at the top of his head. All that proves is Maness was there.

Of course, it also proves something else – namely, that this is not a U.S. Senate campaign with a chance to win. Winning campaigns don’t waste time trying to start stupid fights like this.

Cassidy didn’t say the Northshore Republican Men’s Club affair was his campaign event, he just said it was a “meet and greet” at which he appeared. Even if he did, nobody cares. Let’s say Maness wins this argument: so what?

Is it Rob Maness’ position that every Republican event at which he appears or promotes to his supporters is a de-facto Maness event and thus Cassidy gets a red card for being photographed at any of them? Is it Maness’ position that should Cassidy appear at a Republican event he must do so on an incognito basis and refuse to be photographed? Should he begin wearing disguises?

This is an absurd controversy for his camp to gin up. Perhaps Maness will succeed in raising enough dollars to fill his gas tank a few times off it, but if Byrne believes this gambit is going to convince any uncommitted voters, or more to the point soft Cassidy voters he absolutely, desperately needs to flip, that his candidate is a viable opponent for Mary Landrieu…well, safe to say we’re not convinced.

People who have won meaningful elections in this state can tell you winning campaigns don’t scrape the bottom of the barrel in trying to turn a nothingburger like this into a bona fide campaign issue. With the ongoing collapse of American government visible all around us and the need for real leadership to put the pieces back together, whingeing about “meet and greet” photo ops isn’t likely to make anyone believe Maness is the leader we need.

Interested in more national news? We've got you covered! See More National News
Previous Article The New AmSpec Piece: Hillary As A Spear Trap
Next Article NO JOKE: There Is A Squirrel Chasing Hillary Clinton