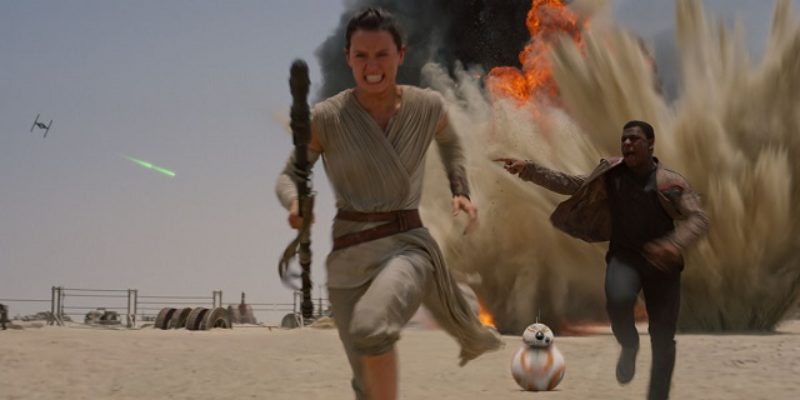 The long awaited sequel to the original Star Wars trilogy hit the theaters a week before Christmas and it was definitely well worth the wait. The movie is definitely worth the hype and you should definitely go see.

Here’s where a lot of the spoilers come in. The movie is about trying to find Luke Skywalker and bring him back to the known worlds. Skywalker was trying to build a new Jedi Order, but he was betrayed by his apprentice and then disappeared. General Leia Organa, who is leading the Resistance against the Empire-inspired First Order, is trying to bring her brother home and has dispatched a pilot to find a map. The pilot, Poe Dameron, goes the desert planet of Jakku where a battle was fought sometime after Return of The Jedi between the New Republic and the remnants of the Empire.

The First Order, led by dark lord Kylo Ren, ambushes Dameron and attacks the village he’s in. The Stormtroopers overwhelm the villagers and kill everyone in the village. Dameron hides the part of the map leading to Skywalker in his droid, BB-8. Dameron is captured and brought on board Ren’s ship. Ren learns of the droid and sends Stormtroopers after it.

Meanwhile Dameron is busted out of prison by a Stormtrooper who Dameron later names “Finn.” They crashland a stolen TIE fighter on the planet and both are thrown away from the crash site. Finn takes a coat that belongs to Dameron and heads to civilization. There he finds BB-8, who has found a scavenger named Rey. The New Order attacks the town the three are in and they escape in an old rundown ship, which happens to be the Millennium Falcon.

The ship is stolen and it heads out of the system. There, a freighter captained by Han Solo captured the ship. After a show down with two gangs on board the freighter, Solo takes the Falcon to a cantina on the planet Takodana. There, Finn tries to escape to the Outer Rim and Rey finds the lightsaber that belonged to Anakin and Luke Skywalker. The First Order eventually launches an attack on the planet and captures Rey.

The First Order has built the Starkiller base, which is a superweapon capable of destroying planets and is built into a planet. They use it to destroy the Republic’s capital. The Resistance decides to try and destroy the base in an attack by X-wing fighters led by Poe Dameron, who make it back alive off of Jakku. In order to lower the shields to allow Dameron to attack it, Solo and Finn fly to the base and try to destroy the shields. While they do lower the shields and rescue Rey, Han Solo is killed by Kylo Ren, who is revealed to be the son of Solo and Leia.

There are two lightsaber duels at the end. The first is between Finn and Ren and Finn is defeated easily and badly hurt. The second is between Rey and Ren. Rey defeats Ren and we learn that Rey is a very powerful force sensitive. In the end, Dameron and his squadrons destroy the base and Rey uses to the map to find Luke Skywalker. The movie ends with Rey finding Skywalker and handing his old lightsaber back to him.

As you can tell, the plot copies a lot from A New Hope. I don’t hate that aspect as much as I should. It reminds me a lot of what J.J. Abrams also did with Star Trek Into Darkness, which was a reboot of Star Trek II: The Wrath of Khan. It’s a copy of an already existing movie, but it certainly stands well enough on its own. I also liked the ending which was the perfect segway to Episode VIII.

The battle scenes were probably the best ever shot in the Star Wars universe. The opening battle scene of the Stormtroopers assaulting Jakku was fantastic. The battle on Takodana was also great. I definitely recommend the movie in 3D.

The planet Jakku is definitely much different from Tatooine. The only similarity is the evaporators from the moisture farms. The planet is littered with the wreckage of Imperial and Rebel weapons and ships for starters. Abrams did well conveying the hardscrabble life of the planet’s inhabitants. I especially liked some of the cyborg animals that Abrams created for some of the inhabitants which were big beats with some machine components.

Unfortunately, the rest of the locales had a similiar feel to their A New Hope counterparts. The Starkiller base was too much like the Death Star. The cantina in this movie was largely similiar to the early movie except it was more of a temple. The Resistance base was almost a perfect knockoff of the Rebel base in A New Hope. The locations are where Abrams could’ve gotten more creative.

There has been some confusion about the political situation in the book. The way to think of it is this, the First Order is best described as Nazi Germany in that it rose from the ashes of the defeated German Empire after World War I. The historical analogy for the Resistance is the VietCong in the Vietnam War and the New Republic is North Vietnam. The New Republic and the First Order are locked in a cold war while the Resistance is an offshoot of the Republic. The reason why the First Order was able to rise was because the Republic had run down its fleet after its defeat of the Empire in the Galactic Civil War.

Overall, the movie was good. It’s a good way to spend nearly 3 hours. It relaunches the Star Wars franchise very well. J.J. Abrams’s talent comes out and he shines. The cast was great, the special effects were excellent, and the plot itself was the only weakness. Definitely recommend seeing it.