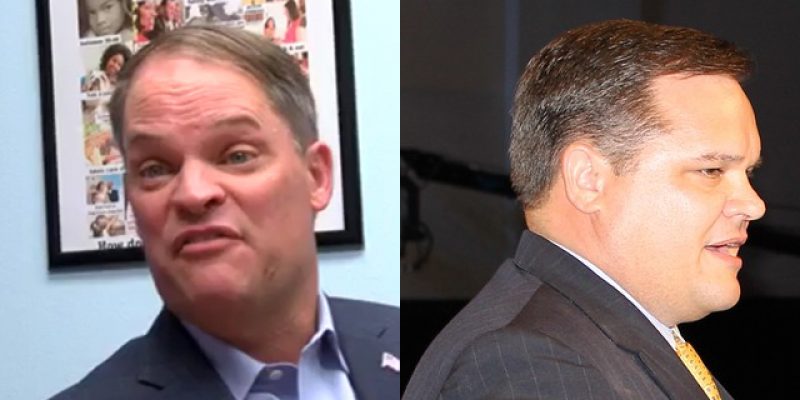 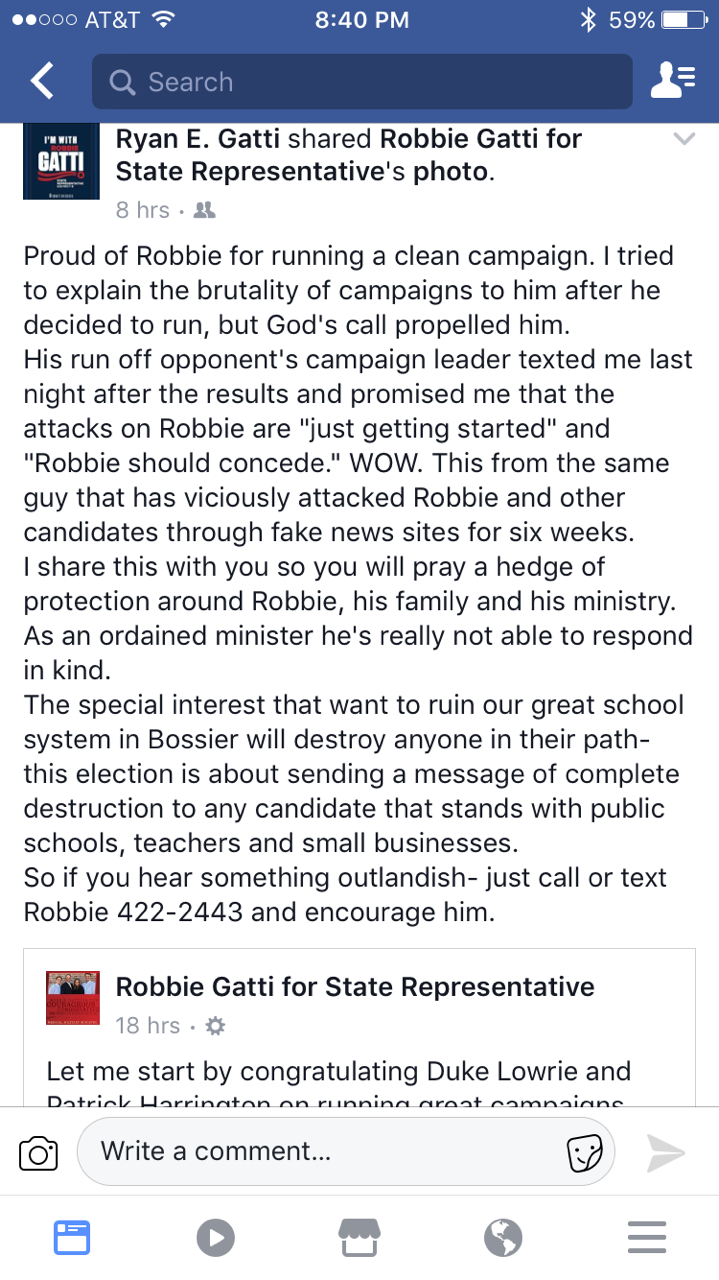 The hypocrisy and deceit at work here is exceptional.

First of all, Gatti doesn’t have the stones to name the people he’s attacking; specifically, it’s state representative Alan Seabaugh who he is claiming is Raymond Crews’ “campaign leader” and it’s this site he’s claiming as “fake news.” This, despite the fact every major media outlet in the Shreveport-Bossier area, and many of them beyond it, picked up on the fact Gatti’s brother, who was beaten by Crews 41-37 in Saturday’s special election for the District 8 Louisiana House of Representatives seat vacated when Mike Johnson successfully ran for Congress (defeating the Gattis’ chosen candidate Oliver Jenkins in the process despite such bitter and vitriolic activism that a prominent church in Bossier City asked both to leave its congregation), appeared in a photo from a church event dressed in blackface.

No one Photoshopped Robbie Gatti’s face into that picture. He admitted it was him. That isn’t fake news; it’s real.

What appears to be fake news is Robbie Gatti’s contention that the photo was taken 15 years ago. His initial explanation contained a contention that he was ordained as a minister in the church at which he showed up in blackface shortly after. But Robbie Gatti wasn’t ordained as a minister there until 2015 – 13 years later is not “shortly after,” and this difference in timing does matter. Because, as we noted, if what has been alleged about the photo by Robbie Gatti’s detractors, that it was taken in 2010 rather than 2002, is true, then the context of the blackface photo is substantially different. He said he was in blackface because he was going to a costume party as Tiger Woods (whose complexion can hardly be depicted with blackface, which is a strike in itself against his explanation of an innocent motive) in celebration of a championship athlete. That was more true in 2002 than it was in 2010; in 2010 Woods was still a prominent golfer but he was more well known as a black celebrity who had trashed his marriage to a white woman with infidelity and therefore was the object of derision in more irreverent and less politically correct circles.

Which in and of itself doesn’t disqualify Robbie Gatti from elected office. But if he went to that party in blackface as Tiger Woods in order to make fun of a black guy who cuckolded his white wife, he doesn’t get to defend himself as an “ordained minister” who’s “trying to get people closer to God,” as he said when he was interviewed on KEEL 710 AM after the blackface controversy blew up. He can say he has a rather rough sense of humor and that everybody there thought it was funny, and that people need to lighten up, and we might even defend him on that basis. But the hypocrisy of this, and the deceit underlying the hypocrisy, is a real problem. After all, the one thing we’ve all had enough of is being lied to by political candidates.

And this is where the other controversy surrounding Robbie Gatti comes in. Robbie Gatti owns an office building on Bert Kouns Industrial Loop in Shreveport. It’s where his physical therapy practice used to be before he “retired” – and if he seems a bit young to have “retired” from a physical therapy practice to you, then your suspicions may be similar to ours about why that business is no longer extant. In 2015, Gatti donated space in that building to John Bel Edwards’ gubernatorial campaign, which is a documented fact and a matter of public record – if you search Edwards’ in-kind campaign contributions at the Louisiana Board of Ethics’ web site you will find it. Gatti later leased space in that same building to not one, but two Asian massage parlors advertising themselves on the appropriate websites as providing “happy endings” massages. And yes, “happy endings” is exactly what it implies – such places are in the sex trade, not the massage trade. The first of the two massage parlors Gatti leased space to was shut down by a cease-and-desist letter from the Louisiana Board of Massage Therapy; he then leased to another, which may or may not be under FBI investigation for prostitution and other crimes.

It isn’t “fake news” that these massage parlors were and are operating in Gatti’s building. It’s a fact. It might be a fact neither Robbie nor Ryan Gatti want anyone to know about, but it is a fact. It’s also a fact which flies in the face of the Gattis’ positioning of Robbie as an “ordained minister” who’s “trying to get people closer to God” – unless the case can be made that Robbie’s definition of that is a bit different than ours.

These kinds of inconsistencies are disqualifying. Upstanding, transparent citizens wishing to serve in public office for the right reasons generally don’t have these kinds of things in their backgrounds. They’re not the same thing as, say, getting a DWI when you’re in your mid-20’s, or having a business failure, or even a divorce years ago from which all kinds of embarrassing details might flow, or having made an unwise statement someone might dredge up. The pattern here indicates a political candidate who is running as something he is not, and doing a sensationally bad job with his facade. He’s not telling the truth about the blackface thing and he’s certainly not telling the truth about the happy endings, and his donation of that office space to Edwards as well as the campaign contributions he’s collected indicate he’s not telling the truth about his supposed conservatism as well.

Nobody can blame Ryan Gatti for defending his brother. That’s normal. But Ryan Gatti is already guilty of baiting-and-switching the voters in his Senate district by making false representations of who he is. We would surmise that those voters wouldn’t have elected Ryan Gatti to the Senate in 2015 over Henry Burns had they known his LABI score would be a pitiful 22 percent for the 2016 session – the worst score of any Republican in the legislature.

And all the attacks in the world, and all the accusations of “fake news” either Gatti can conjure up, won’t change the hypocrisy and fraud coming out of that camp.