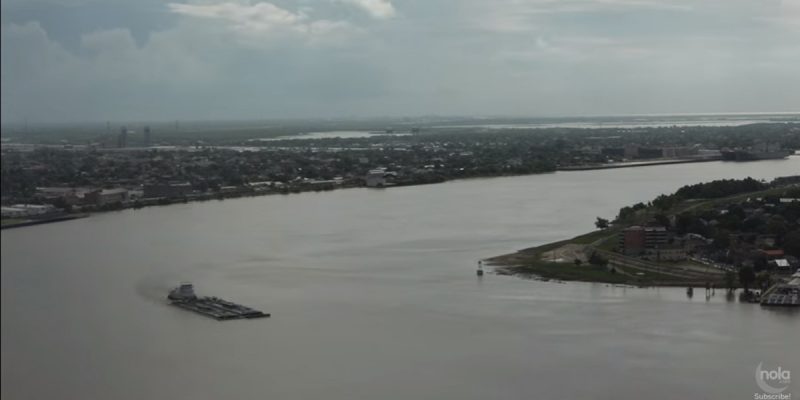 Times-Picayune/NOLA.com photographer Emma Scott put forth an all-day effort to record a typical day along the Mississippi River, something we in Louisiana largely take for granted, and came away with a relatively cool 90-second video for her trouble.

Nothing unusual happens on this video – it’s a lot of boat traffic, mostly, and it actually seems like what Scott recorded was a somewhat quiet day along the river. If you’ve stayed at a hotel like the Hilton Riverside, for example, or been in one of the office buildings with a view of the river you’ll generally notice a large number of very big ships passing by. This is mostly barge and ferry traffic.

We tend not to notice the fact New Orleans is one of the busiest ports in the world. For most of the city’s history the role it has played in the nation’s economy has been a pivotal one. After all, the Mississippi River Valley, which has been and continues to be the breadbasket of the world, all drains through New Orleans, and that means New Orleans has been crucial the export of American agricultural products as long as those have traveled along the river – which is still the most effective way to transport large quantities of bulk goods. New Orleans is also a major port of entry for bulk goods coming into the country.

Naturally, the state and the city have done a suspect – at best – job of promoting the port of New Orleans as an economic asset, and the port has lost ground to Houston and Gulfport over the years. So long as Louisiana continues to have stupid policies like an inventory tax which our neighbors don’t have, we’ll pay the price for them.

Still, the scenery in the video is worth watching on a lazy July morning. We love that river, and so should you.

Interested in more news from Louisiana? We've got you covered! See More Louisiana News
Previous Article Budweiser’s Folds Of Honor Web Ad Is Certainly Something To See On The 4th Of July
Next Article Rebekah Gee Is Now Publicly Talking About Stealing Drugs To Treat Hep-C In Louisiana