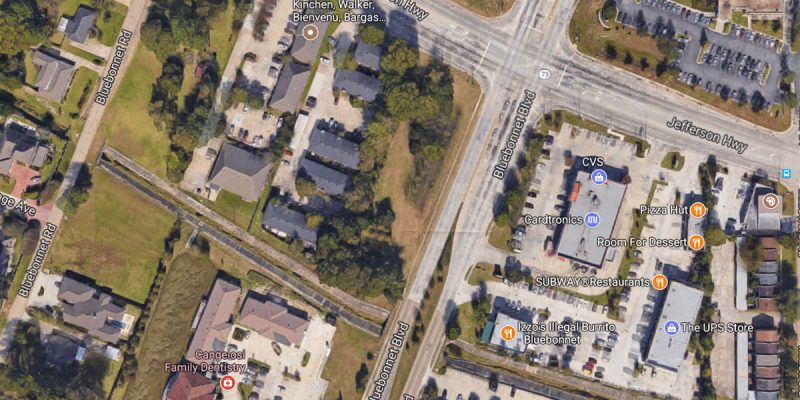 We were going to just let this story go, because it’s really a nothingburger, but it’s a bit peculiar how hard it’s being pushed by the Baton Rouge Business Report and that made us a little suspicious.

Developer Radu Cosman paid for an appraisal on the 22,000-square-foot piece of land fronting Bluebonnet Boulevard in the Inniswold Estates neighborhood in 2013. That appraisal, completed by RHI Appraisals, found the property was only worth $42,000.

But the city commissioned its own appraisal on the land—which the city-parish owned—and found it was worth $255,000.

Cosman earlier that year had asked his representative on the Metro Council, Ryan Heck, to declare the land surplus and have the city sell it to him. The land is located behind Cosman’s house. The council then approved the land to be sold at auction, where Cosman outbid one other person and bought the property for $50,000.

The Metro Council unanimously approved the sale of the property in December 2013, and the deal closed the following month. The city-parish appraisal, which assumed a single office building could be developed on the property, suggests Cosman got a more than $200,000 discount on the land.

Cosman’s purchase of a corner tract of land at Jefferson Highway and Bluebonnet Boulevard earlier this year raised eyebrows for the price: $10,000 for a 50,000-square-foot piece of land at a busy intersection. Daily Report first reported on both of Cosman’s land deals with the city-parish Monday, and the city-parish has since said it will change how it conducts surplus land sales.

Boy, that sounds really bad, right? And Business Report Executive Editor J.R. Ball has launched a social media jihad pushing the story about Cosman’s coup and upbraiding people concerned about the BRAVE scandal that they should be just as concerned about crooked Metro Councilmen like Heck who “gave away” city property. A sample…

Heck, who is a some-time contributor here at The Hayride and a friend, has been incensed about this story since it first popped earlier this week, and he laid into Ball with a comment on the latter’s Facebook page…

This is dishonest journalism at best. Mr Cosman was instructed by the parish attorneys office to pay for an appraisal and he did so. The parish attorneys office disagreed with the appraisal and ordered their own. This land is directly behind his home and was overgrown with 5+ trash trees and 10′ of growth. It was never maintained by the city and was causing snakes and other varmints to get in his pool. At the time his two twin girls were prolly 3 years old and it was a problem. His appraisal (from a licensed appraiser) was 42k. That appraiser worked from the assumption of what it was worth as part of the man’s backyard and what $ were going to be necessary to clear the land. Because of the large delta between the two appraisals, it was determined that a public auction would satisfy all parties. Mr Cosman would take the risk of having someone outbid him, and the City took the risk of having it sell for less than the city ordered appraisal.

At that public auction (which I attended BTW out of curiosity) one other individual showed up and eventually Mr Cosman bid 50k, which is higher than the original appraisal. Everyone was satisfied with the outcome. All of this was done in the full sunshine of public hearings, public auctions, and unanimous council decisions live on TV and the Internet.

Contrary to what Biz Report says, Mr Cosman isn’t a developer. He’s never developed real estate. He owns his home and his office.

I know people want a grand conspiracy, but this ain’t it. Not even close.

I did my 4 years and what I saw was enough for me to walk away. It’s not run like a business. It’s not run how you and I would run our households.

It must be a real slow week over at the Business Report, but to be honest, my sources tell me this is a direct action by SWB admin to deflect away from their giant problem with BRAVE contracts and their other issues that remain to be resolved.

There are a number of things to keep in mind here, all of which don’t make the Business Report look any better than the former Metro Councilman they’re attempting to hang out to dry.

First, why is this story popping this week? Cosman didn’t buy that first parcel this week; he bought it in 2013, That was four years ago. The second sale was put in motion last year and finished earlier this year. Not this week, not last week. So why has this supposed scandal led the Business Report’s coverage for four straight days when the real topic of conversation in this town is the BRAVE controversy?

Does it have anything to do with the fact the Business Report’s publisher Rolfe McCollister endorsed Sharon Weston Broome last year, an endorsement which was so illegitimate on its face given the 45-point difference in LABI scores, the best indicator of whether a Louisiana legislator is pro-business or not, between Bodi White and Broome as to make a mockery of the publication’s name? Is this an example of water-carrying?

Why does the Business Report persist in calling Cosman a real estate developer? He’s a stucco contractor. If he’s able to develop that parcel on the corner of Bluebonnet and Jefferson, which thanks to the Business Report’s coverage is a major if, it’ll be his first venture in that field.

Which leads to something else – why is this supposedly evidence of corruption? The first piece of property Cosman bought was worth $42,000 when it was appraised by a licensed appraiser. It sold for $50,000, which is $8,000 more than that appraisal. Forget about the city’s appraisal – the fact that the land went to auction and one other bidder was there, and that bidder bugged out at $50,000, should tell you all you need to know about which appraisal was closer to reality.

As for the second parcel, the sale of which is supposedly the worse of the two, does the Business Report think this is Pumpkin Center or Zwolle? That’s a piece of property on the corner of Bluebonnet and Jefferson. You don’t think every developer in Baton Rouge would pay attention if it became available? That none of them watch the city-parish government’s listings of property to be auctioned?

Answer: of course they do. So if none of them show up to bid on that property, it tells you something – namely, that the parcel in question is a dog with fleas.

It’s zoned residential, but nobody in their right mind will build a house on the corner of Bluebonnet and Perkins. Build some condos there? Awesome – this market isn’t saturated with condos as is; sounds like a real moneymaker to put a half-dozen units on that property. Get it re-zoned? Now? Even if you could, it’s not like you have space to throw much more into that space than a Verizon store, a Subway and a CC’s Coffeehouse amid a retail real estate market in Baton Rouge which is pretty soft as is. We’re not talking about a good piece of land here; chances are Cosman is going to get a snootful of this real estate development thing and decide it’s not for him thanks to this deal.

You could make the argument that the Metro Council screwed up by not rejecting the sale because the price was too low, but if this thing had generated the kind of attention the Business Report seems to think it should have, the bet here is the result wouldn’t change.

Look, if you want to get the maximum sale price on a piece of real estate you own, nobody in that business will advise you to auction it. Besides municipal auctions, the primary auctions you’ll see in that market come as a result of two things – sheriff’s sales and foreclosure auctions. Properties in those sales go for pennies on the dollar, because price in real estate is a function of timing as much as it is of inherent value. That’s why when you’re selling your house, you hire a real estate agent and list it. Why doesn’t the city-parish do that? Because for one thing, if they went out and hired real estate agents to sell surplus property you’d have stories left and right about the connected real estate agents who got the listings. For another, it takes a long time to sell property, particularly larger parcels. The point of auctioning city property is to get it off the books, to stop having to pay to maintain it (which a local government will do a crappy job of, anyway) and to put it into commerce so that it can start generating property tax.

The real irritant here is why the city-parish still owned these properties, and lots of others it’s stupidly holding onto, instead of unloading them years or decades ago. If you want to complain about some fantasy $200,000 loss the city-parish took on Cosman’s land, then why aren’t you screaming about the millions of dollars in property tax revenue it’s wasted by not moving the land to paying customers?

Heck understood this, independent of the fact he was friendly with Cosman. What the Business Report neglects to inform its readers is he was on a four-year crusade to get the city-parish to unload all the land in his district that it didn’t absolutely need and his advocacy to auction these two parcels was a drop in the bucket of that crusade.

What’s worst about this is the effect this will have. By making a scandal out of the city-parish auctioning surplus property because the price didn’t meet the unrealistic expectations of a bureaucrat or two, the Business Report is going to halt the efforts to put that property back into commerce. And that means a smaller tax base, less economic growth and, in all likelihood, higher taxes for worse services for those of us who own property in Baton Rouge.

Thanks a lot, guys. You helped give us the BRAVE scandal by endorsing Broome, and now you’re helping her distract the public from it by pushing a fake-news scandal. That’s a bang-up job of promoting a good business climate at the Business Report.

Interested in more news from Louisiana? We've got you covered! See More Louisiana News
Previous Article Now It’s Hillar Moore’s Turn To Tell His Side Of The Story
Next Article Trump Nominates Doughty, Juneau As Federal Judges For WD-LA