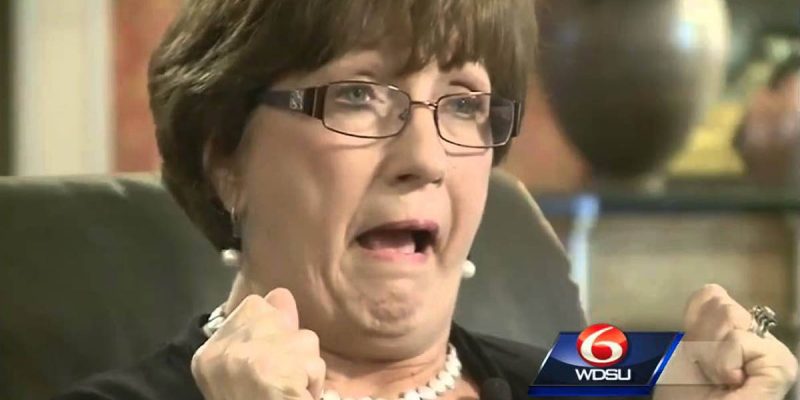 A pretty severly balding George Costanza, talking to Jerry about what he looks for in a woman: “Thick, lustrous hair is very important to me.”

An incredulous Jerry Seinfeld: “Thick, lustrous hair is very important to me, is that what you said? Just clarifying.”

Jerry’s bafflement at the irony of George’s obliviousness surely matches my own feelings upon reading that former Louisiana Governor Kathleen Blanco says Houston should have had an evacuation plan for Hurricane Harvey.

Apparently Blanco sees the parallels between the devastation caused by Hurricane Katrina in New Orleans so many years ago and the havoc wreaked in Houston courtesy of Hurricane Harvey.  But somehow, looking back on Katrina and her tenure through rose colored glasses, she sees her–and then New Orleans Mayor Ray Nagin’s–“plan” pre landfall as. . .  Effective?  Something better than catastrophic?

Here are some things I remember about Katrina–about failing to plan, planning to fail. . .and all that jazz.

Several days AFTER the city of New Orleans had been inundated by water, Blanco & company were in a frenzy attempting to find buses to transport tens of thousands of victims stranded by the storm in The Big Easy.

Eric Lipton wrote in a New York Times article, “Federal Emergency Management Agency officials expected the state and city to direct their own efforts and ask for help as needed.  Leaders in Louisiana and New Orleans, though, were so overwhelmed by the scale of the storm that they were not only unable to manage the crisis, but they were not always exactly sure what they needed.”

Overwhelmed. . .due to lack of an effective plan?  Louisiana’s Commander in Chief certainly appeared to be in over her head.  Some might remember it that way.  Blanco was seen by some as weak for getting weepy and naive for making reference to relying on prayers.  Me, I cry at the pictures of the dogs that need adopting, and I pray.  A lot.  But I don’t substitute emotion and religion for a solid plan in the face of crisis; I can’t afford to.  Faith and action cannot be seen as mutually exclusive. God helps those who help themselves, or so I’ve heard.

I remember Denise Bottcher, then press secretary to Blanco, lamenting that the governor was doing, “too many ‘first lady’ things and not enough John Wayne.”

I remember over a thousand deaths resulting from Hurricane Katrina. . .and a congressional hearing in which Blanco was repeatedly asked why she failed to order a mandatory evacuation of New Orleans–and why Louisiana didn’t give President Bush an emphatic, “Yes, please and thanks!” when he proposed federalizing National Guard troops.

Blanco’s communications director, Robert Mann, wrote about, “the sickening sight of an underwater New Orleans. . .all that black water, houses and businesses submerged, as far as anyone could see.”

Sound familiar, Houston?  We know.  We’ve been through it.  Hurricane Katrina, the Great Flood of 2016. . .  We know your suffering because we’ve lived it, and some of us understand the near impossibility of planning for the type of catastrophic event that has rocked you to your core in recent days.

We know Houston is the fourth most populous city in the nation.

Experience tells us a mandatory evacuation ahead of Harvey’s landfall would have been dangerous, if not damn near impossible.

We know rain was instrumental in your unprecedented flooding and that predicted storm surge wasn’t necessarily enough to warrant a monumental pre-storm evacuation.  We know your officials don’t have a crystal ball.  Neither do ours.

We know your literal struggle to keep your head above water, and we know your truly terrible situation cannot simply be dismissed as a failure to plan.

What’s more, we know some of us are in absolutely no position to criticize or play Monday morning quarterback.  We’re too busy being grateful our glass houses are currently standing on dry land.

Interested in more news from Texas? We've got you covered! See More Texas News
Previous Article VIDEO: A Tour Through The Devastated, Submerged Ponderosa Forest Neighborhood
Next Article Somebody Decided To Troll The New Orleans Sewerage & Water Board, Real Hard