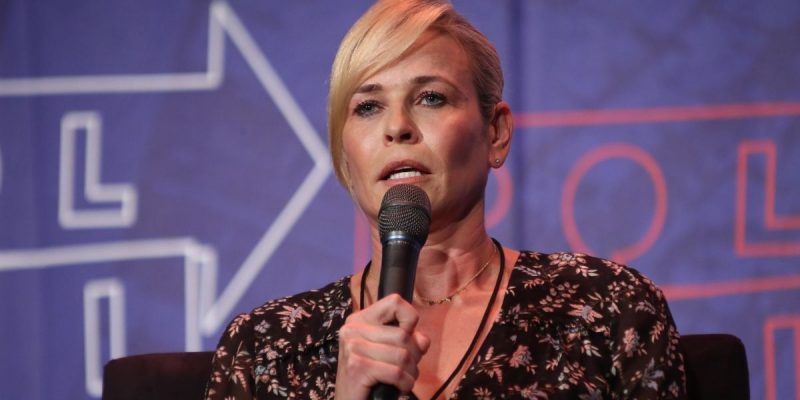 It gets harder to respect the opinions of one’s fellow man when those opinions are expressed in a way so devoid of goodwill as we’ve seen from the gun control crowd in the wake of incidents like the one which erupted yesterday in Sutherland Springs, Texas, southeast of San Antonio.

Let’s understand who the perpetrator of Sutherland Springs was and the chain of events he set off. Devin Patrick Kelley was a disaffected loser and a creep who was roundly condemned as a misfit by those with whom he attended New Braunfels High School, and upon graduation in 2009 he joined the Air Force – within three years he’d been court-martialed for physical abuse of both his wife and his child, spent a year in a military prison (an indication that abuse was of a quite serious nature) and given a bad conduct discharge by the Air Force in 2014. As such he wouldn’t appear to be legally able to purchase a firearm, and yet he managed to slip through the cracks and buy one at an Academy Sports by lying on his license form.

Meanwhile, Kelley was a militant atheist who disparaged God and Christians to anyone who’d listen, even despite listing a month’s volunteer service at a Baptist church on his LinkedIn. Kelley also seems to have been a rather partisan social justice warrior based on some of the things he’d posted on his now-deleted social media profiles.

And Kelley chose for his victims the church to which his mother-in-law, with whom it’s a reasonable bet he differed on many questions given what he did to her daughter and the fact that the couple divorced in 2014, belonged.

It’s a fair assumption that what this amounts to, though we have little use for the definition, was a hate crime. Kelley, the militant atheist, hated his wife’s Bible-beating Baptist family and so brought his fraudulently-obtained Ruger AR-556 rifle to her church and shot 57 people, killing (so far) 27 of them. Either during or after the rampage – the details are sketchy – a law-abiding citizen of Sutherland Springs named Stephen Willeford arrived on the scene with his own rifle and engaged Kelley outside of the church. Willeford shot Kelley in the side as he came out of the church building, which put an end to the killer’s exploits. He immediately dropped his weapon, got in his vehicle and fled.

Willeford and another Sutherland Springs man, Johnnie Langendorff, gave chase in a vehicle Langendorff borrowed from his girlfriend, following Kelley down country roads at speeds up to 95 mph while Willeford literally rode shotgun and Langendorff communicated by phone with law enforcement. At some point one county away from the crime scene Kelley ran off the road into a field, and it appears bled out from his wound (or perhaps shot himself, indicating that he might also have had a pistol) while Willeford trained his gun on the killer.

Those are the facts as we know them so far.

We don’t know whether Kelley was an Antifa member or whether there was a distinctly political motive to his crime. That’s something which has been speculated, and that speculation has fuel given that yesterday’s massacre came one day after Antifa’s supposed political revolution was to begin. In another incident, Sen. Rand Paul was attacked by a leftist neighbor as he mowed his Kentucky lawn, suffering five broken ribs and needing hospitalization.

At this point one would be justified in expecting the American Left to exercise a moment of introspection and wonder whether things are beginning to go too far – or, given the relatively constant barrage of vitriolic name-calling they’ve engaged in with respect to those who don’t agree with them, at least taking stock of whether the backlash to the Paul attack or Sutherland Springs might be more than they can handle and maybe a good idea would be to turn down the temperature. 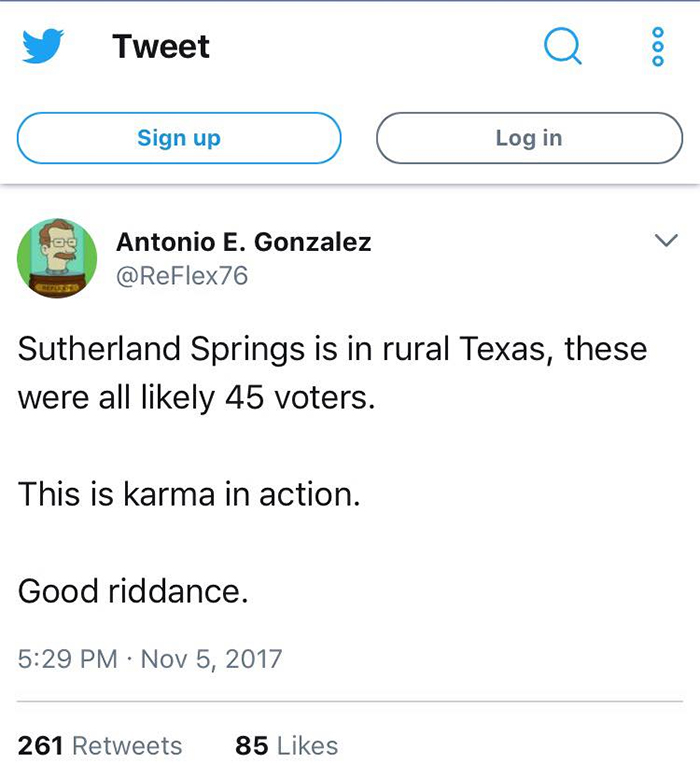 And this leftist troll… 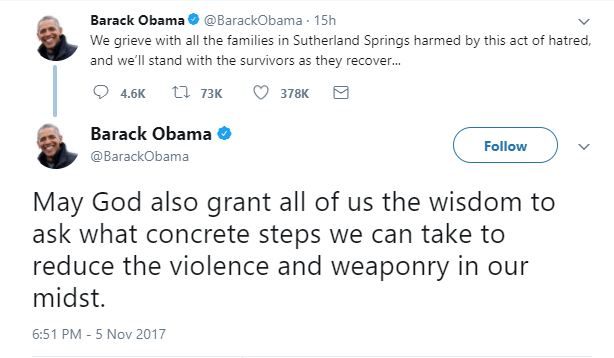 And then there were the usual Hollywood leftists, like for example former child Star Trek actor Will Wheaton, who attacked House Speaker Paul Ryan for offering thoughts and prayers for the victims…

And the horrendously unfunny Chelsea Handler, to offer perhaps the most egregious affront of them all…

There is a sad consistency to these mass shootings; namely, that every one is pounced on immediately as some sort of “teachable moment” to promote gun control when it’s virtually impossible to show how any of the incidents sparking the fresh demands for gun restrictions would have been prevented. The only possibility for “effective” gun control would be a wholesale confiscation on the order of what was done in Australia, something which is not only politically impossible but logistically impossible as well since American gun owners wouldn’t comply with any such governmental effort and it would involve a violent campaign to disarm those people.

And meanwhile guns are ubiquitous in next-door Mexico, which indicates anyone willing to access the black market for smuggled firearms could get them just as easily as one might currently get heroin from south of the border.

These people know this. They know it. They don’t care. It doesn’t even bother them that in the case of Sutherland Springs, just like in the case of the deranged Bernie Sanders goon James Hodgkinson who shot up the Republican congressional baseball team and nearly killed Rep. Steve Scalise, it’s their partisans who are the most dangerous.

We might agree with an Australian-style gun control push, if it was aimed at Antifa leftists and registered Democrats who appear to be responsible for the majority of gun deaths in America. If the gun-grabbing ghouls on the Left were really possessed with the kind of goodwill they demand to be given credit for they’d agree to serve as guinea pigs for such an experiment.

In the meantime, the rest of us recognize that what causes a Sutherland Springs is not the prevalence of guns but rather a declining and poisoned culture, in which life is decreasingly precious, the resolution of conflict through reasoned discussion is out of style, outrage and screaming are literally all the rage and basic decency is considered quaint and weak. In such a culture, where it’s acceptable to call it “karma” that Texas Baptist Trump voters or Las Vegas country music fans be slaughtered at church or while recreating, one should not be surprised at the ever-growing mountain of horrors leading to our dissolution as a society.

Solving this mass shooting epidemic means solving that larger, harder problem. A few hack politicians passing some law won’t accomplish a thing. And anonymous lefties posting hot-take tweets attacking their fellow man will do even less good than that.