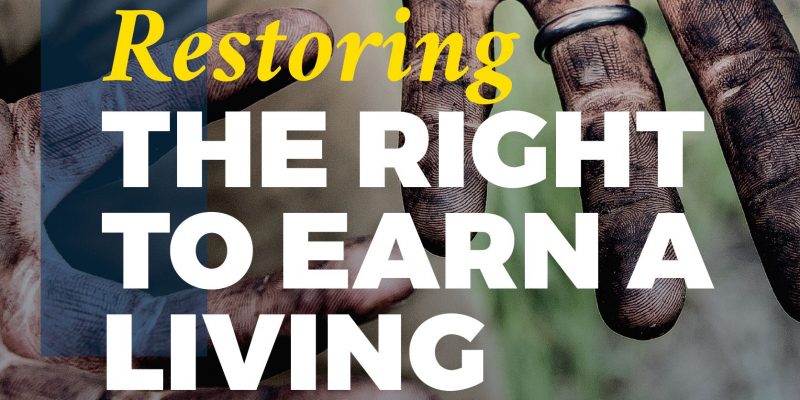 Occupational licensing laws – government permission slips to work in the job of one’s choosing – often mean the difference between poverty and prosperity for Louisianans throughout the state.

Take the story of Sandy Meadows, a high school dropout who moved to Baton Rouge to start a new life after the death of her husband. Meadows found meaningful work and made a respectable living as a floral clerk at a grocery store, eventually rising to the floral department supervisor. But Louisiana law requires that floral arrangers have a license from the state. After the Louisiana Horticulture Commission inspected Meadows’s store and found she was unlicensed, she lost her job. She ended up unemployed and on the verge of homelessness, dying before a legal case that challenged Louisiana’s arcane and protectionist florist laws could be appealed.

In a state with slow job growth and low wages, thousands of others like Meadows have been blocked from meaningful work because the state imposes licensing requirements – often at the behest of incumbent industries and trade associations – that have no relation to the public health and safety.

The volume of occupational licenses is astonishing. In the 1950s, only five percent of jobs required an occupational license; today, roughly one in four jobs require one. And the types of professions that are licensed would be comical, if the issue wasn’t so serious. In this state, not only florists but shampoo assistants and interior designers, just to name just a few, have comprehensive training and testing requirements before one can wash hair or move furniture around a house.

And the sad truth is these sorts of occupational licensing regulations most often fall hardest on the least advantaged in our society. People who are just trying to earn an honest living but often don’t have the time, money, or wherewithal to navigate complex, expensive, and often senseless regulatory requirements.

Efforts to review and repeal these requirements, including those expressed by Governor John Bel Edwards, should be supported.

But there is another – perhaps more pernicious – problem at the heart of occupational licensing. Many occupational licensing rules that affect everyday Louisianans – most of them, in fact – are not put in place by elected lawmakers, but rather by unelected, unaccountable state regulatory boards. Boards that are not accountable to the people, or to elected lawmakers. Even more troubling, when a job seeker is hurt by one of these regulations, decades of bad court decisions have rendered their regulations nearly immune from legal challenge in the judiciary.

The result of this lack of accountability is that regulators expand their regulations, and make them more restrictive, and in many cases more irrational, than they otherwise would.

This solution addresses the accountability problem. Unlike other judicial cases, such as free speech cases, that receive actual protection under the law, when occupational licensing regulations are challenged in court, they are reviewed under a standard called “rational basis scrutiny.” This standard requires courts to defer to most decisions by a licensing agency.

For example, when hardworking citizens like Meadows question why unlicensed florists are a threat to the consumer, courts are obligated to put a thumb on the scale for the licensing agency. In Meadows’s case, the state argued that if florists were not licensed customers could be exposed to infected dirt or prick their fingers on exposed sticks. This standard is so deferential that not only were these ridiculous rationalizations upheld, judges are actually obligated to come up with reasons supporting the government’s position even if the government lawyers are unable to do so.

The Right to Earn a Living Act, as demonstrated by a new report published by the Pelican Institute and the Goldwater Institute, corrects this problem by requiring government to prove that restrictions on job seekers will protect consumers rather than arbitrarily deprive hardworking people of their freedom to earn a living.

Of course, government should protect the public against unqualified or dishonest businesses, and the Right to Earn a Living Act does not stop government from doing so. But regulators shouldn’t be free to impose arbitrary restrictions on entrepreneurs that don’t make sense. And people harmed by these regulations should be given their day in court.

The Right to Earn a Living Act restores the proper balance between freedom and legitimate government regulation, ensuring that economic opportunity for all is not merely a promise, but a reality.

Jon Riches is the Director of National Litigation at the Goldwater Institute. Daniel J. Erspamer is the CEO of the Pelican Institute.