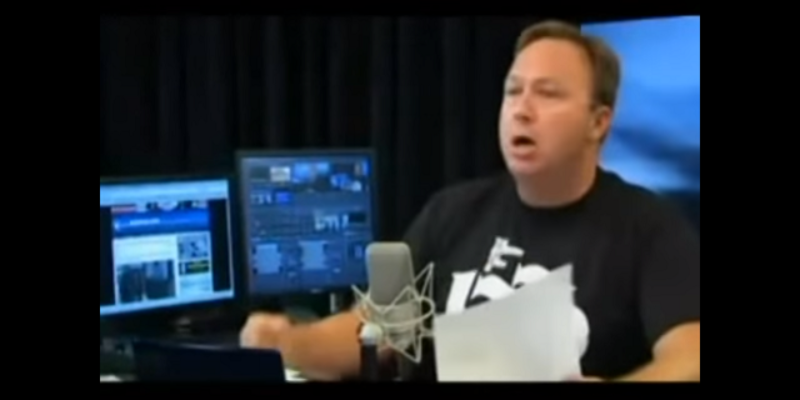 I’m not a big fan of Alex Jones, to say the least. I think he’s nuts when he’s not faking half the outlandish things he says. I’m sure most sane, rational people feel the same way. I have never non-ironically shared an Infowars article and if you want to be taken seriously, you shouldn’t either. But there’s no question he has built a media empire and has attracted millions of loyal fans all across the country.

Listening to Alex Jones is like listening to Coast To Coast AM. No one admits they listen to it but they secretly do. InfoWars is the guilty pleasure for many Hayride readers, I’m sure. His radio show is syndicated on over 160 stations and reaches millions of listeners.

But it’s now a lot harder to watch or listen to Alex Jones. Over the past 24 hours, Facebook, Apple, and YouTube have banned Jones from their platforms. This follows in the wake of Spotify removing Jones’s podcasts from their service. The reason for removing Jones’s content was that he violated the tech platforms’ “hate speech” rules.

Even if you don’t like Alex Jones you should be disturbed by his censorship by tech companies. For starters, the tech companies moved against Jones because they were pressured to by the online mob. Also, given that all four companies moved within a 24-hour period shows that this was likely not a coincidence.

Finally, who the hell defines what “hate speech” is? The British for example have defined teaching a dog to give the Nazi salute as a joke as “hate speech.” The phrase “hate speech” is prone to abuse because it is strictly in the eye of the beholder.

Of course, the tech companies can ban who they want from their platform. After all, the First Amendment’s acknowledgments of freedom of speech and freedom of the press apply only to the government and not to private actors. But just because they can doesn’t mean they should. Removing Jones’s content for vague reasons serves as a chilling effect on free speech.

The only reason why people use these platforms is to express themselves. If they don’t think they can express their views freely, they will move elsewhere. It is in the tech companies’ self-interest to take a permissive approach to speech issues.

If the tech companies wanted to remove Jones’s content for being “fake news”, fine. I probably wouldn’t be writing this column if they did. Jones’s media empire does publish a lot of fake news. Jones’s lawyer even admitted that he is a “performance artist” in his divorce hearing last year. Banning Jones for fake news is not something I would do, but at least it is justifiable.

Instead, Jones is the target of the left’s desire to censor voices that it doesn’t agree with. They went after Jones first because he is an easy target. They wanted a high profile scalp with a large reach to send the message that non-progressive views will not be tolerated. If we don’t stand up for Alex Jones, who knows what they will target next.

We also need to touch on the obvious double standard. The New York Times just hired tech writer Sarah Jeong for its editorial board. Someone uncovered a whole lot of racist tweets targeting white people. Instead of firing her as the NYT would have done if someone said “black” instead of “white”, they stood by her.

Part of the reason why the left stood by Jeong is that she serves The Cause. They also don’t believe that racism against white people is possible because they have accepted the literal Marxist definition of  racism which is “prejudice + power.” If we’re going to crack down on “hate speech”, we need to be consistent.

Of course, we shouldn’t actually crack down on “hate speech.” The best way to combat bad ideas is to shine the spotlight on them. All trying to silence Alex Jones will do is make him a martyr and solidify his base. It will also make his ideas more attractive for the same reason children rebel against their parents. People don’t like being told what to do and people will check out Jones and go to InfoWars just to see what all the fuss is about.

If you want Alex Jones to have his day of reckoning, it should not be at the hands of online SJW mobs and tech companies that pander to them. Instead, it should come in a court of law at the hands of the Sandy Hook shooting survivors who are suing him for defamation for claiming the shooting is fake. Our legal system does a very good job of balancing the rights to free speech and freedom of the press vs protecting people against defamation. Plus Jones can actually defend himself in this setting.

The censoring of Alex Jones sets a terrible precedent. If we don’t stand up for him, who knows where this will end. We should be troubled not because the person being censored is Alex Jones, but because you could be the next person censored.