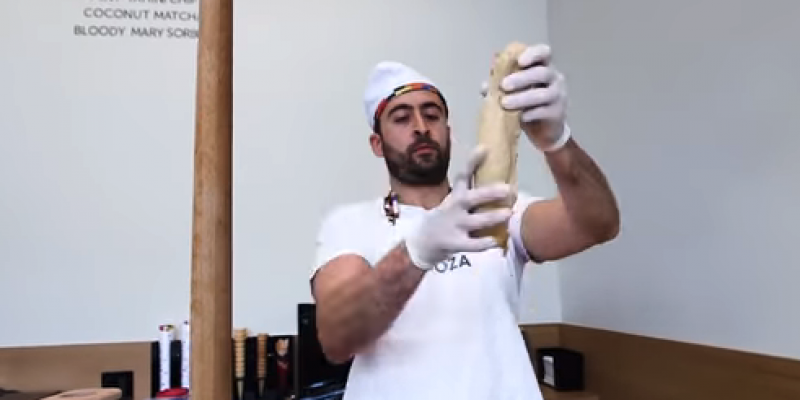 Stretchy ice cream– known as Booza– is a 1500-year-old ice cream invented in Damascus, Syria. It’s prevalent throughout Lebanon, Egypt, Jordan, and Israel because of two key ingredients used to make it that is native to the Middle East: sahlab and mastic.

Booza is Arabic for ice cream and it’s consistency is different because it is made with sahlab (سَحْلَب) or salep, orchid root flour, which makes its consistency stretchy and resists melting. Salep is a primary ingredient used in Turkish ice cream called dondurma, and Greek ice cream, kaimaki.

Interestingly the owner of the Republic of Booza in Williamsburg, Brooklyn, refers to the area where stretchy ice cream was invented as “an area in the Middle East called the Levant.”

The Levant is what Islamists, including Barack Obama, refer to when they use the acronym ISIL instead of ISIS. Under Islam the entire region of the Middle East, Northern Africa, and Arabia have always been Islamic and must stay that way– including “reclaiming” Jerusalem. ISIL stands for the Islamic State of Iraq and the Levant, not the Islamic State of Iraq and Syria (ISIS). The Levant, is also what some Christians believe is still the promised land to Jews mentioned in God’s covenant with Abraham in Genesis.

One has to wonder if the liberals in Williamsburg support ISIL/S– which would be quite strange in light of the huge population of Jews living in Williamsburg. And the huge number of Jews in New York who support the state of Israel.

One also has to wonder if they understand the history of the region, which I explain in my new book, What Every Christian Needs to Know About Islam.

Booza tastes more like cold toffee, and is thicker and has a completely different texture than American ice cream.