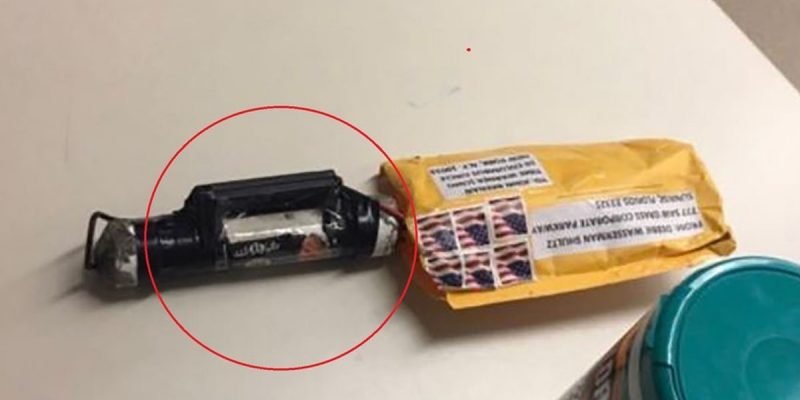 And we mean an awful lot. Look around social media, listen to talk radio, or just have conversations with folks and the “false flag” crowd – people who think the culprit behind those suspicious mail packages which went out to several prominent, though perhaps now “B-list,” Democrat political figures yesterday will turn out to have been a leftist aiming at building turnout for the Dems – is very loud and very convinced.

The “responsible” folks on the conservative side are telling the false flag crowd to shut up. For example, here’s Ben Shapiro…

If your first reaction to some evil person sending bombs to a variety of politicians on one side of the aisle is “FALSE FLAG,” you are officially deranged.

Shapiro then qualified his statement by saying nobody knows the truth about the mail bomb spectacle yesterday and today (if you haven’t heard there were suspicious packages sent presumably to Joe Biden and to Robert DeNiro of all people), and the real derangement is to declare it a false flag stunt before any evidence comes in.

Fair enough. But it’s not derangement to look at the context of these events and find them suspect. For example, Rush Limbaugh wasn’t very impressed with this fiasco as it’s being described by CNN and others of their ilk…

Limbaugh openly questioned why any right-winger would be behind such an operation when Republicans have been dominating politically and such acts would only work to hurt the party. Implying some sort of left-wing operation, Rush asked if “these bombs were intended to be discovered in screening” and not actually meant to cause harm to the individuals addressed on the packages.

“Were these bombs intended to be discovered in screening?” asked Limbaugh. He also questioned how “someone smart enough to make a bomb” could be “dumb” enough to think such packages would actually be sent to Soros or Obama.

It would, however, make sense if a Democrat(s) were behind the devices, suggested Limbaugh. Everything has backfired on the Democrats, from their wild tactic with now Supreme Court Judge Brett Kavanaugh to their uptick in “mob” tactics, he noted.

“Would it make a lot of sense for a Democrat operative or Democrat-inculcated lunatic to do it? Because things are not working out the way they thought,” he said, adding, “Things that are supposed to cement it, like the Kavanaugh trick backfires, and these mobs are backfiring. They are not achieving their objectives.”

“What sense does it make for a conservative Republican to gum up the works here by sending a bunch of bombs that are not gonna go off and that are gonna be discovered? It doesn’t make any sense in any way, shape, manner, or form,” emphasized the radio host.

Limbaugh noted a tweet by journalist Alessandra Bocchi, who made a similar point…

As a journalist, my job is to be skeptical. Terrorist attacks are committed during times of desperation, not victory. People who’ve won against Obama/Clintons/Soros have no reason to attack them now, when they’ve all but become irrelevant. https://t.co/uOGLig89ic

There is a point to be made here. In no case are any of the “intended victims” of these bombs worse off for having been named as a target.

Hillary and Bill Clinton are preparing to launch a stadium tour to promote a new book, at a time when their political and cultural relevance is at its lowest ebb since coming onto the national political scene in 1991.

Barack Obama is tooling around the country stumping for Democrat candidates, and the crowds he’s drawing are very small.

Eric Holder is contemplating a presidential run, having put himself in a poor media light for suggesting the Left “kick” its political opponents. His project to have the Democrat take over state legislatures in advance of redistricting in 2021 isn’t particularly showing much in the way of results.

George Soros is now widely reviled, and his fingerprints are all over the migrant caravan meandering through Mexico on its way to an ugly end at the U.S. border.

Debbie Wasserman Schultz is hated within her own party for the damage she did to it while DNC chair, and her involvement in the Pakistani IT mess which amazingly didn’t result in somebody going to federal prison on espionage charges has permanently banished her to back-bench status in Congress.

John Brennan has been thoroughly discredited for his role in corrupting the intelligence community to involve itself in a presidential election, and he’s outed himself as a virulent, unhinged partisan during his time as an MSNBC commentator.

Maxine Waters has made herself known as the single most uncivil person in American politics for having encouraged her supporters to attack Republican political figures in public, and she’s also widely reviled by the public.

Robert De Niro hasn’t been in a hit movie in ages, and he’s pretty clearly desperate for some positive publicity. He proved that when he screeched “F**k Trump!” on national television while giving a presentation at the Tony awards a few months ago.

All of which is to say that if it’s a conservative behind these suspicious packages, the culprit can be described as an abject, ignominious failure. Rather than kill any of these people – if you’re savvy enough to know who they are, how on earth could you possibly expect that the Clintons, Obama and Soros would be opening their own mail? – the “bomber” has made them sympathetic figures at a time none of them could be considered remotely so.

Not to mention that these packages appear to be harmless, and it seems they’re designed more to look like bombs than function as them.

Which is one reason to believe this is a false flag operation. Left to their own devices these people, other than perhaps Soros whose money continues to fuel a lot of troubling activity deleterious to good societal order, would be increasingly irrelevant. Getting mail bombs which do not detonate other than in the media space is a publicity boon to them.

So much so that it’s as if somebody sought to help them out.

And the fact all of these devices arrived on more or less the same day is a bit suspicious. The Post Office isn’t that consistent. Not to mention the packages we’ve seen don’t appear to have the postage stamps canceled, an indication these were hand-delivered to mailboxes at least in some cases.

We’re not sold either way. It’s entirely possible this was some deranged lunatic conservative who thought he’d take out all the worst Democrats in one fell swoop, and if that’s the case we probably should have a national conversation about the rhetoric. That’s on both sides, by the way, because when George Soros funds Antifa and Maxine Waters talks about attacking people in restaurants, there are going to be people who interpret that as the start of a war and decide to do their bit of resistance.

But Limbaugh has a point. Somebody sophisticated enough to make bombs, whether they actually work or not and at this point we don’t know if these do, should be sophisticated enough to know that sending them to a bunch of Democrats hardly helps the Republican cause in the midterm elections less than two weeks away, and that’s worth at least some suspicion this imbroglio isn’t quite as it’s being presented.

Time, and the investigation, will tell.