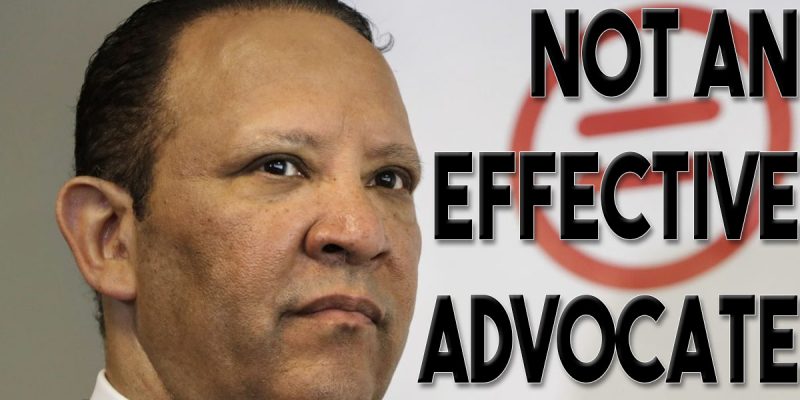 …on tomorrow’s ballot in Louisiana. It seems all of the best people are for this amendment, which would change the state’s felony standard from the state’s status quo of needing a 10-2 jury vote in order to convict an accused criminal.

But if the “Yes” side wants it to pass, they certainly seem to be going about it in a way designed to achieve as little unanimity within the state’s electorate as possible.

For example, there’s Marc Morial, the head of the Urban League and former notoriously corrupt and ineffective mayor of New Orleans, who’s been out stumping for the amendment. And how’s he doing it?

“This to me is Louisiana stepping from the dark past into a bright future,” Morial said. “The fact that Louisiana has held on to its nonunanimous jury system for so long is puzzling, and to some extent, appalling.”

Morial, who served as New Orleans mayor from 1994-2002, pointed out that Louisiana actually required unanimous verdicts for most of its first century of statehood. The change came in 1898, at a notoriously racist constitutional convention whose primary purpose was to disenfranchise the state’s African-American population.

This came at a press conference in New Orleans wherein Morial also accused Republicans in Georgia of “voter suppression” and bragged that the Urban League was partnering with Lyft to give people free rides to the polls.

There are many disparate groups pushing for the passage of Amendment 2. We’ve taken an official position in favor of it here, which puts us on the same side as Morial and some other elements within the state who are virtually never right about anything.

But if this is going to be sold in Louisiana as some sort of racial justice issue, the chances of it passing drop dramatically. The majority of the voters in this state have no patience for that kind of advocacy – they see that as the reason they won’t live in Orleans, Caddo or East Baton Rouge, and they certainly aren’t interested in doing as Marc Morial bids them.

Look, there is an easy way to sell this. It’s simple – this is something Louisiana does that practically nobody else does (Oregon has a 10-2 rule, but in Oregon you can’t get a life sentence without a unanimous jury, unlike here). And when it comes to law and politics, when Louisiana is at odds with the rest of the country it almost always means we’re doing things worse than the pack, not better. So you fix it by just doing what everybody else does and hopefully that means you’re not 50th in whatever public policy metric governs the issue at hand anymore.

That’s very easy to explain and understand, and it usually resonates with the majority of folks in the state who aren’t happy about Louisiana’s poor standing in the public policy metric rankings. But attempt to sell this as some sort of civil rights initiative being pushed by the Urban League and Southern Poverty Law Center and the rest of the urban Democrat leftist crowd, and it’s a lot less likely to pass.

Because the more cynical observers are going to look at this issue and conclude the effect of Amendment #2 will be that while the status quo would require a defense attorney to buy off three members of a jury in order to keep his client from being convicted, once it passes he’ll only need to buy off one. And when Marc Morial tells those cynical observers they’re a bunch of racists for opposing it, they’ll be convinced their suspicions were correct.

Interested in more national news? We've got you covered! See More National News
Previous Article Hey, I Got Another Boudreaux And Thibodeaux Joke For Y’all
Next Article A Fresh Poll In Georgia Says Brian Kemp Is Going To Slaughter Stacey Abrams Tomorrow Night