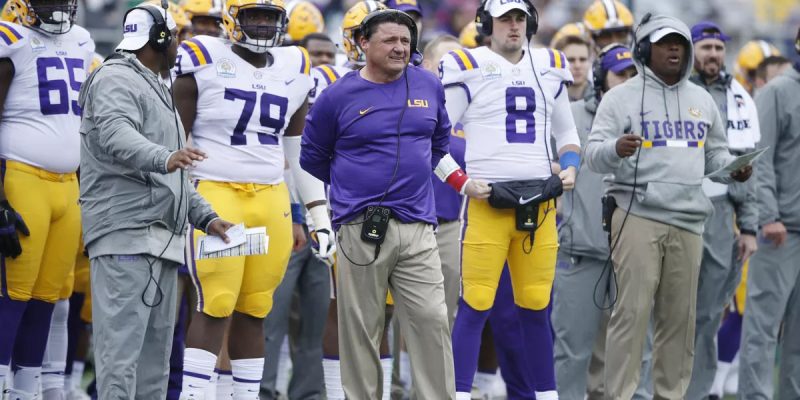 Coaching staff changes are inevitable, but they might not be the ones you think. Everybody is going to talk about offensive coordinator Steve Ensminger’s status, and the fact is there are some people available who could be upgrades over what LSU currently has.

Is a change at offensive coordinator needed? Well, it’s hard to make most LSU fans believe that if the Tigers had a guru of an offensive coordinator to match the highly-paid and highly-regarded Dave Aranda on the defensive side the program might not be a little closer to the seemingly-unattainable goal of knocking Nick Saban and Alabama off their perch as college football’s top program. That is the standard LSU has been burdened with since Saban arrived in Tuscaloosa – and especially since Alabama began the current era in the rivalry between the two programs with a 21-0 pasting of the Tigers in the infamous national championship game on January 9, 2012. Given that Ensminger-coordinated offenses have twice been shut out by Alabama in Tiger Stadium, the common perception among fans is going to be that LSU will never reach the mountaintop and toss Saban off it until there’s a hotshot playcaller in the press box.

One factor in some of this analysis, assuming there is a decision to go with a big ringer of an offensive coordinator, is LSU’s settlement of Les Miles’ buyout earlier this month before the latter took the head coaching job at Kansas. That frees up some $1.5 million per year in future budgets, meaning that should LSU wish to pursue a superstar offensive coordinator like a Kliff Kingsbury, Kendal Briles, Hugh Freeze or Larry Fedora, they’ll have as much or money money to spend as anyone in college football.

But let’s remember something – nobody on LSU’s offensive roster next year will have experienced the luxury of having the same offensive coordinator two years in a row. And if you’re constantly changing offensive coordinators you can’t realistically expect your offense to improve. LSU needs BOTH innovation AND continuity. So if you’re going to change out coordinators you’d better make sure your new guy is (1) so damn good that it’s worth yet another shakeup in scheme, philosophy and terminology, (2) a good fit with your staff, which you didn’t have the last time you brought in a hotshot from out of town (namely, Matt Canada in 2017) and (3) willing to come in and stay a while so you can build something with him. That could well be a good argument for holding on to Ensminger and as much of the offensive coaching staff as you can. Or if not, it’s at least an argument which says if you’re going to make changes you’d better try to insure those changes stick for at least 2-3 years.

So this could be a real feast-or-famine situation with respect to changes on the offensive staff. For example, running backs coach Tommie Robinson is an Orgeron favorite; the two coached together at USC and they’ve got a good relationship. But Robinson is LSU’s recruiting coordinator, and as such he’s the guy responsible for the decision to take three-star Alabama prospect Tae Provens over Hahnville superstar Pooka Williams (over 1100 yards and a 7.0 per-carry average on a terrible Kansas team) – that’s a decision which looks like a monster bungle so far. The fact that Lanard Fournette showed so much zip when given an opportunity late in the season makes one question Robinson’s personnel decisions with the running backs. So far, we can’t exactly say Robinson has been a great asset – at least not given what we’ve seen. There is, additionally, a rumor that Robinson wants to return to coaching in the NFL. So perhaps there will be an opening at the running backs coach spot – and with former Tiger great Kevin Faulk serving as the director of player development on the staff already, there is a potential superstar running backs coach already on campus.

And it’s pretty clear the two-headed monster of Jerry Sullivan and Mickey Joseph hasn’t exactly paid off with the wide receivers. Sullivan is a legend in the pro ranks and nobody doubts his knowledge, but one questions whether he’s getting through to these kids who keep running lousy routes, dropping catchable passes and missing blocks – so much so that it’s hard to point to anybody (other than maybe Derek Dillon) who’s gotten better as the season has gone along. And while Joseph does seem a pretty good recruiter, how much of a dent he makes in coaching the receivers is a matter of doubt. When LSU’s had a really good college wide receivers coach, you’ve been able to see the results pretty much immediately. An Adam Henry gives you Odell Beckham, Jarvis Landry and Reuben Randle. A Todd Monken gives you Dwayne Bowe, Buster Davis and Early Doucet. A Stan Hixon gives you Josh Reed, Michael Clayton and Devery Henderson. That isn’t what LSU has now.

Sullivan’s contract was only for one year, moreover; most of the LSU insiders we’ve talked to don’t expect him back, and Joseph – who has no doubt earned his paycheck on the recruiting trail by reeling in five-star prospects Ja’Marr Chase last year and John Emery this year – has been rumored for some time to be headed, at least eventually, to Denver to join his brother Vance on the latter’s coaching staff with the Broncos (Joseph’s contract at LSU is also up at the end of February).

Orgeron’s friend Tee Martin, who served as the wide receiver coach (and offensive coordinator this past year) at USC for the last several years, is recently out of a job – it would not be a surprise at all if LSU joined the sweepstakes of schools looking to hire Martin. He’s known as a sensational recruiter, and while his results as an offensive coordinator weren’t all that hot as a wide receiver coach he’s certainly put out an impressive string of products to the NFL – Marqise Hill, Ronald Woods, Nelson Agholor and Juju Smith-Schuster, among them. Martin also coached Randall Cobb when he was the wide receivers coach at Kentucky.

James Cregg has a pretty good resume as an offensive line coach, and while the line was lousy in 2018 it seems like Cregg ought to get a second year to see if he can settle in with more continuity and better depth in order to build his unit. But outside of that, things might develop in such a way that Orgeron might be able to bring in an offensive coordinator who can work with his own handpicked people. Such a situation could offer an opportunity to build continuity, at least going forward after yet another offensive system reboot.

Or, maybe Orgeron will go with the more or less the same group of offensive coaches and try to build continuity based on the baby steps LSU took this year. And with Joe Burrow back to lead an offense which should return eight starters in 2019 it isn’t delusional to think those steps could become strides using the same guys.

On defense, don’t be surprised if there are more changes than you expect. This wasn’t Dave Aranda’s best year as LSU’s defensive coordinator, but he’s unquestionably very highly thought of in the coaching profession and his name will come up as a potential head coach. The Texas Tech job is open; Aranda was a graduate assistant there under Mike Leach in that program’s glory days. The Louisville job is open. Neither of those programs play defense, and they might just decide to gamble on one of the best defensive minds in college football. There was also a rumor saying that USC was readying to make a play for Aranda, who’s a Southern California native. That one we don’t buy – USC doesn’t have $2.5 million a year to pay a defensive coordinator, and Aranda’s kids apparently have said they don’t want to leave Baton Rouge. It would have to be either a college head coaching job or perhaps an NFL defensive coordinator position to move Aranda, though with each year his stock rises toward potentially landing one.

And should Aranda take the plunge as a head coach, Corey Raymond is going to want the LSU defensive coordinator job. It is very unlikely Orgeron would give it to him, which means Raymond is a possibility to look around. He believes he’s ready to be a coordinator and if he’s offered such a job (maybe with Les Miles’ staff at Kansas?), he could make a jump somewhere. Bill Busch, who took over the safeties this year, has done a good job and is more likely to be in line as Aranda’s successor than Raymond – but LSU will have to have recruiters, particularly for defensive backs, so if Raymond has to be replaced it’s going to have to be with an absolute ace salesman like Raymond is. We’re going to guess Corey will still be on the LSU staff next year, as will Aranda, but nothing is set in stone.

Not to mention that LSU defensive line coach Dennis Johnson is in the final year of a two-year contract. Since he was elevated to the status of position coach from that of a graduate assistant after Orgeron was hired as the head coach in December 2016, Johnson’s main role on the LSU staff at this point is as a recruiter, as Orgeron has a major hand in coaching the defensive line in practice this year and Pete Jenkins was the defensive line coach (Johnson was then coaching outside linebackers) in 2017. In 2016 and 2017 Johnson had a strong performance on the recruiting trail, landing K’Lavon Chaisson and Tyler Shelvin in 2016 and Jarell Cherry last year.

But though he does have a pair of four-star trophies in Texas linebacker Marcel Brooks and Ruston tackle/tight end Ray Parker, 2018 has been tough sledding. A Mississippi native, Johnson was thought to be in good position to land at least one of a half-dozen top-flight defensive line prospects in his home state, but so far he’s rolled snake eyes on Byron Young (Alabama, though visiting LSU in December), Jaren Handy (Auburn, though he previously committed to LSU and says he’s still considering Baton Rouge as a college destination), and Charles Moore, Nathan Pickering and De’Monte Russell (Mississippi State). If Johnson doesn’t pull a rabbit out of the hat to restock his crucial position, those contract renegotiations could be dicey.

In short, though Orgeron might well be in line for an extension LSU could have an almost entirely new coaching staff next year. Or they could have two or less new coaches. Nobody really knows, but don’t be surprised whichever way it goes.

Next: What will LSU do about the SEC?