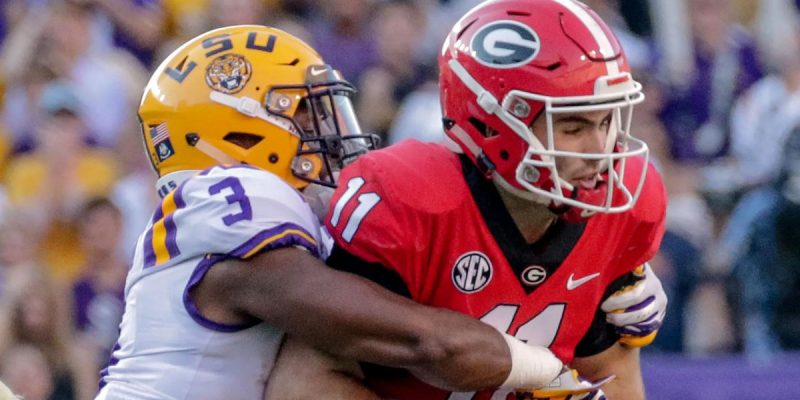 First of all, we’ll say that on the whole Ed Orgeron and his staff did a pretty good job of putting the best players on the field. When the Tiger coaches identified somebody they could count on, they put that player on the field – and when players at a position didn’t particularly separate themselves, the coaches for the most part did what they could to rotate them in until the cream rose to the top.

For the most part.

But use of personnel was nonetheless something of a concern with this coaching staff in 2018, particularly at the skill positions on offense. There are obviously things we don’t see, not being at practice every day and not being privy to inside word on injuries and so forth, but some of the decisions about who to use and how have been head-scratchers, and if there’s something we think Orgeron needs to correct it’s how he puts his talent on the field.

Wide receiver Jonathan Giles is the most glaring example. He muffs that punt in the Texas A&M game and gives the Aggies a short field which leads to the only offense they’re able to mount in the second half of that game until their desperation drive late to tie the score on the last play of regulation; but for that muffed punt LSU almost certainly takes total control of that game and puts Texas A&M away. And you’d say that’s just a bad break, that Giles was normally a pretty reliable punt returner, etc.

Except he wasn’t. Giles had mishandled several punts over the course of the season, and gave LSU almost zero threat of a return. He averaged a pitiful 7.1 yards per punt return, with a long of only 22 yards and no touchdowns. That’s the worst performance by an LSU punt returner in more than a decade; this was the first year since 2013 LSU didn’t run a punt back for a score, and the 7.1 yard average by the main punt returner is the worst since Chad Jones averaged 6.6 in 2007. Does LSU really not have anybody at running back or wide receiver or in the secondary capable of a 10-yard average and a reliable set of hands as a punt return man?

Or take running back Lanard Fournette. He did have a dropped pass that would have been a huge play on a wheel route against Texas A&M, but Fournette also took advantage of limited opportunities in the last two games to average 8.8 yards per carry for the season on 12 carries, and at 9.2 yards per catch he’s the most productive receiver out of LSU’s backfield despite very limited duty. With the Tigers struggling so much to find playmakers did Fournette have to get so little action this year? Did Nick Brossette, who averaged a pedestrian 4.4 yards per rush, really need to carry the ball 211 times in 2018, at the expense of Fournette and Clyde Edwards-Helaire (4.6 yard average)? Brossette’s per-carry average was the lowest among often-used backs at LSU since Spencer Ware’s 3.9-yard average in 2012, and he had twice as many carries as Ware had that year. We’re not down on Brossette, who did after all lead LSU in touchdowns scored with 14. But after watching him spend too many plays in the back half of the season trying to bounce runs outside without the speed to reach the edge, and then seeing Fournette show that outside speed Brossette lacked, one wonders if maybe the backfield mix shouldn’t have been just a bit different in 2018.

Jontre Kirklin is another kid we’re scratching our heads over. Orgeron said he was an “electric” talent at midseason when he moved Kirklin to wide receiver from cornerback, and yet he finished the season with one catch, two rushes (he fumbled on one of them) and a pair of punt returns for a combined 17 yards. That doesn’t sound very electric – either Kirklin was oversold and needs to go back to corner, or he didn’t get much of a chance. Along similar lines, what happened to Racey McMath? Orgeron moved him to tight end when LSU found itself criminally shorthanded at that position due to injuries, and in the Ole Miss game McMath turned in a couple of catches for chunk-play gains showing some real talent at the position…and then disappeared for the rest of the season other than serving in his role as a key special teams contributor. Why go away from McMath as a second tight end who makes for mismatches against linebackers in coverage?

How about Jacoby Stevens? He’s much more of a Roman Harper-type run-stuffing strong safety than a cover man, but Stevens certainly showed off the ability to chase down ballcarriers and make big plays as a sophomore this year – and yet he disappeared for long stretches of the season. We expect Stevens will be a breakout player on next year’s defense, but we wonder if maybe he could have gotten more use as a disruptor on this year’s team. We wonder similarly about Neil Farrell, who seemed to make more disruptive plays per time on the field than perhaps anyone else on the defensive line and yet Farrell also disappeared for long stretches.

We can’t say if it was favoritism, or a lack of vision, or maybe the crush of having to game-plan for ranked opponents week after week, but there were a number of players on this year’s LSU team who might have been able to break out and give Orgeron game-changing plays he would have needed to get more breathing room in games the Tigers had to struggle to win. And we think that sometimes, he stuck with other players who weren’t quite as productive. In 2019, Orgeron’s third year, we want to see a bit more aggressiveness in putting young or undiscovered talent on the field to see what it can do.

Next: Are there staff changes on the way at the LSU football office?

Interested in more news from Louisiana? We've got you covered! See More Louisiana News
Previous Article The Supreme Court Just Sided With Humans In St. Tammany Parish Over A Frog Who Doesn’t Live There
Next Article Nine Thoughts On A 9-3 LSU Season – THOUGHT SEVEN: Are Coaching Staff Changes Coming?