Last month when we gave our recommendations on the six constitutional amendments which passed on the Louisiana ballot, we warned that Amendment 4, which was the one aimed at blocking funds for state police traffic control from being spent out of the Transportation Trust Fund, and therefore rededicating that money to road construction and maintenance (the state police would be then redeposited into the state general fund), would lead to demands for tax increases.

But two things we don’t like are going to come from its passage – not because the amendment is bad, but because this is Louisiana. First, the state police will then be at the Capitol for next year’s legislative session telling horror stories about layoffs and patrol cars breaking down for lack of maintenance, with car wrecks piling up all over the interstates, because they won’t have any money from the state general fund. Just get ready for that, because it’s coming just like there wasn’t going to be any college football or all the seniors were getting evicted from the nursing homes. That’s a given.

And second, you’re going to hear triumphant boasting from the state Department of Transportation and Development about how now that the state police aren’t dipping into the TTF and its monies go far more to the roads, NOW’S THE TIME to pass an increase on the gas tax so Louisiana can work on its infrastructure needs. The fact that there’s already more money for roads in the TTF since the state police will be out of that till won’t matter a bit.

Vote for this, sure, but understand that there’s a strategy afoot to demand more money from you two different ways the minute you do.

We cheated a little when making that prediction, because we’d heard word that the latter part was already in the works. It turns out there’s a coalition of The Usual Suspects getting set to push another attempt at raising Louisiana’s gas tax for the purpose of solving the state’s backlog of transportation projects and/or doing road maintenance.

And these guys sure seem determined to feed at the through in next year’s legislative session.

Two weeks ago there was this…

Great turnout to our Louisiana Coalition To Fix Our Roads Event this morning! Thanks to all those Members who attended! #LAGC#LCFOR#LAGCLegislativeEfforts pic.twitter.com/LTtMpj4eU1

The coalition has reeled in a number of other players – LABI and the Associated Building Contractors of Louisiana, for example – though there’s a multi-level play going on that it appears not everybody is behind.

First, we’ll start with a tweet from Americans For Prosperity’s Louisiana state director John Kay a week ago…

Kay also picked up on something interesting from that Nov. 1 tweet from the Louisiana Association of General Contractors about the coalition…

I love this tweet. The bottom of the powerpoint screen is a plea from industry folks to grow the coalition past people who would profit. When someone tells you who they are, believe them. #lalege https://t.co/XXRp2wY704

What Kay is talking about is a PowerPoint presentation put on by the digital media advertising agency Push Digital, which has been hired to conduct an advocacy campaign this winter aimed at building public support for a new effort to build roads in the state. That shouldn’t be overly controversial – everybody wants to pour more concrete around here, and certainly in Baton Rouge there’s a consensus that more road capacity and a new bridge would be a great idea.

Some of the players in the coalition, however, are less than excited about the idea of a 26-cent gas tax hike to fund all this new largesse – which is, as we understand it, the aim being pushed by Ponti as the head of the coalition.

Another bit from Kay… 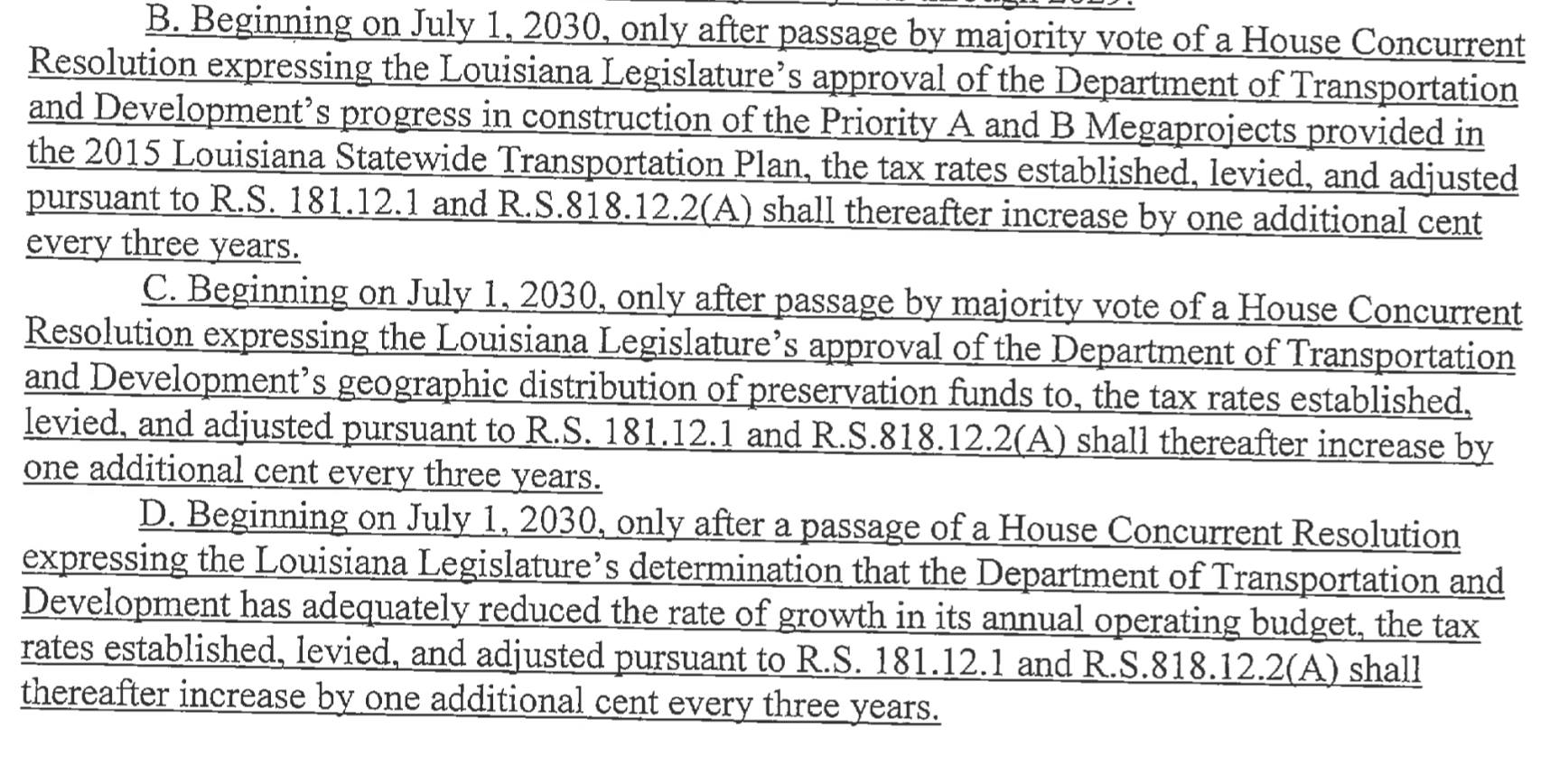 Spent time reviewing the NOT PUBLIC drafted 2019 gas tax legislation: The legislation would allow for 3 cents worth of tax increases by SIMPLE MAJORITY every 3 years beginning in 2030.

This is after the initial increase and automatic increases end. Constitutional end-around.

Again, this is pushed by the LCFOR group headed by Louisiana Asphalt Pavement Association ED Erich Ponti. I have heard the legislation draft was spearheaded by the current head of Louisiana Motor Transport Association, Inc.

Over the last week there has been a lot of speculation about all this, because among legislators we talked to the idea of a 26-cent gas tax hike during an election year seems absurd to the point of comedy. That’s unlikely. Not only that, but we’re also told that Gov. John Bel Edwards, who is no enemy to tax increases having signed some $7 billion worth of them in three years as governor, has said he’s not for this plan.

But supposedly, Ponti and some of the others in this coalition have been attempting to sell its more reticent members on the idea that there is a two-thirds vote to pass this tax in both houses and therefore Edwards’ support isn’t needed. While that is nuts, it’s given rise to some speculation that maybe the idea here is to put something on the table that Edwards can shoot down so as to burnish his anti-tax credentials (not that he has any) in advance of his re-election campaign – with the payoff coming in 2020 when his second term begins.

It’s the kind of chicanery we ought to be used to in Louisiana. What we don’t see happening is the gas tax passing in the House, but we suppose that’s what all the money being put up for “advocacy” is about. Get ready to be deluged with messaging about how terrible our roads are and how something needs to be done, as though you didn’t already know it. But pay attention to how little is said about the need to prioritize roads over other things the state is spending money on – and that’s how you’ll know they want to raise your taxes.

UPDATE: Here’s what the advocacy campaign they’re talking about is going to sound like, as it’s going to be coming from the same advertising firm…