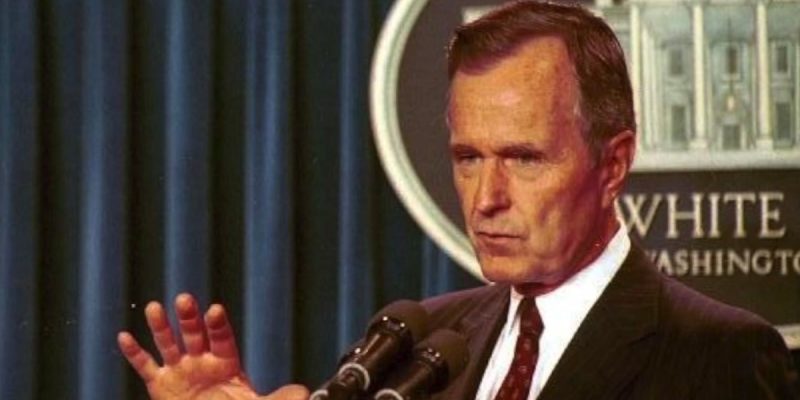 Last week, we lost a true American hero and public servant with the passing of George H. W. Bush at the age of 94. One thing that should be clear to anyone who has learned about his life is that his accomplishments in business, the military and politics pale in comparison to his record as a true gentleman and devoted family man. Especially in light of today’s world where civility, respect and integrity seem all too hard to find at times, recalling the character traits of this unique leader is a timely learning opportunity.

Along those lines, I decided I would reach out to a friend of mine who had a special relationship with the former President to hear what he thought about the legacy of the man known to many as 41. My friend Christian Rhodes, who as a child had the opportunity to develop a relationship with the President due to his father’s public service under President Bush, sent me the following response:

“My time with President Bush…

We met when I was three years old and I feel like he never forgot about me. He took an interest in me the way one would with a grandchild; he played with me, and spoiled me, we had fun together. He took me to the South Lawn of the White House to wave goodbye to President Reagan as he would depart Marine One. He didn’t make me eat the vegetables I was served and snuck me extra jelly beans from the Oval Office.

But also, grandfatherly, he sought to make sure I maximized my potential as a human being on this Earth. He started by making sure I understood the responsibility that comes with the gifts afforded to me. That what’s important is to put back more than you had been given. That being an American was less about what we could impose on the lives of others and more about how we could improve the lives of others. The tributes from those who knew him best align with my memory of him.

He wanted to make sure I was aware of my responsibilities as an American and that I would fulfill them. But, he didn’t try to inject his methodology or ideology for fulfilling those responsibilities on me. He was more concerned that our hearts were aligned on our hopes for our country, not our ideologies.

He was less interested in teaching, and more interested that I was learning and what I was learning (hard to unlearn those CIA tricks). He didn’t trouble with where there was disagreement. Instead used it as an opportunity to offer perspective. He was steadfast in his views and beliefs but always allowed space for them to be challenged. He shared his victories with others, but, insisted on humility to enjoy them. He grew wiser and more understanding in defeat… even after his largest defeat, he continued to improve on how he could serve our country. As his perspective changed with age, so did his thinking on matters; an attribute that we should all hope we can share.

He was a Husband, a World War II Hero, a father, a small businessman, a big businessman, a Member of Congress, a diplomat, a grandfather, the intelligence chief, a Vice-President and President.

His presence in my life and his willingness to share his life experiences with me, allowed me to understand the world in a way that most four, nine, and 13-year-olds just don’t typically get.

As an American, it was an honor to know him the way I did. As his young friend, I am grateful for the interest he took in me and that his interest has forever changed my life and my future.

Hail to the Chief!, Mr. President!… for a life well lived, a country well served and for taking an interest in inspiring little kids, like me, along the way.”

What a special legacy.

Survivor of being shot down in aerial military combat. Director of the CIA. President and Vice President of the United States. Father to a President and a couple of Governors. The legacy of President George H.W. Bush and the many different roles he played in our nation’s history may be somewhat expansive and complex… but in reality, his legacy is quite simple. He was smart, tough and fiercely dedicated to his country and family. He treated people with respect and tried his best to bring out their best. He took the time to care and took pride in being a good role model and friend to others.

Quite a life well lived… and quite an example for us all to follow.