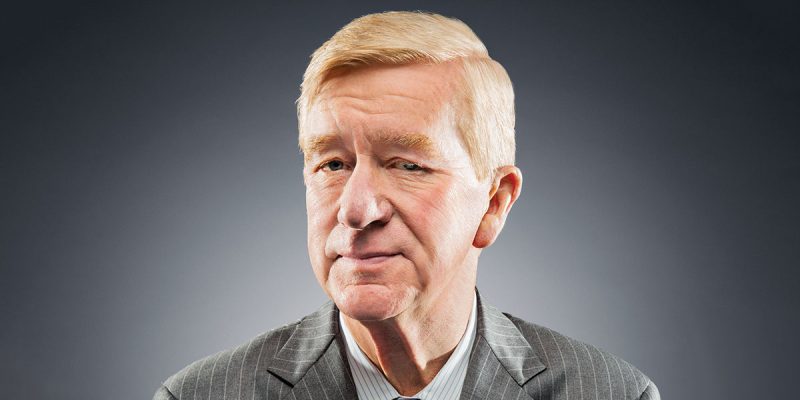 I wouldn’t suggest anyone reach out to the London betting houses such as Ladbrokes to wager a few quid on Weld succeeding in his Trump Tower tilting as the president currently enjoys an 89% approval rating amongst Republicans according to an April 2019 Gallup poll.

But defeating Trump in the primaries is not Weld’s intention, just as it was not his goal to see the Libertarian Party receive many votes in 2016, using his new found quasi-political relevancy as a ticket squatter to bury the GOP candidate and praise the Democrat.

While speaking days before the November presidential election, Weld dumped on the “dangerous” Trump while shilling for Hillary Clinton, describing the Democratic nominee as “honest” and “a person of high moral character”.

So much for the grand experiment of the Libertarian Party having two former governors on a presidential ticket.

Granted you can understand from a Judas Iscariot standpoint why Weld would shower effusive words upon Hillary: her husband tried to make him ambassador to Mexico in 1997, a move that got single-handedly stalled by one Jesse Helms, who chaired the Senate Foreign Relations committee.

As if conservatives needed any more reasons to revere the late Senator from North Carolina.

Weld suffered yet another political indignity in 2006 when he unsuccessfully sought the Republican nomination for governor of New York.

I suppose John McCain was too right wing for Weld.

Weld then supported Romney again in 2012 (noticing a pattern here?) and then Ohio governor John Kasich in 2016 before jumping on to the Libertarian Party.

And in January 2019 Weld returned to the Republican Party for the express purpose of fighting Trump within the primaries.

William Weld isn’t the Benedict Arnold of the GOP; he’s the Chelsea Manning of American politics.

So what is Weld’s angle?

First, he’s from Massachusetts and New Hampshire has received its fair share of new residents who can no longer afford to live across the border but have yet to kick their habit of voting for terrible candidates. New Hampshire voters also tend to be parochial in their balloting, giving an extra boost to candidates from neighboring states.

Secondly, Weld would be the default recipient of the “Never Trump” voters that haven’t already left the GOP and unaffiliated voters who forgot their reading glasses and don’t want to choose from the Chinese menu of Democratic candidates of some profile (currently at 20ish).

Thirdly, Weld will attract much fawning anti-Trump media in the New Hampshire primary, hoping that is enough to score a newspaper byline in the Manchester Union-Leader and perhaps reach the Granite State’s generous delegate threshold of 10% to have some poor soul in Charlotte casting a vote for him on the roll call.

Being a geographically small and politically ornery state, New Hampshire is the only place where the Never Trump wing of the GOP can expect to register a blip of protest.  Historically, New Hampshire has proven somewhat accommodating for such flies in the ointment.

New Hampshire marked the high water mark of those insurgent movements, with the former not slowing Nixon down a bit en route to his historic landslide victory over Democrat George McGovern.

In the case of Buchanan’s run, the Crossfire host never equaled what he received in any other contest, though it did expose a previously undetected voter dissatisfaction with 41 that paved the way for Ross Perot’s strong third party campaign and the eventual election of Democrat Bill Clinton.

In terms of viability Weld is probably somewhere between Ashbrook and the perennial political legend Harold Stassen (seriously, that’s a Wikipedia entry worth reading).

However the establishment media will afford Weld every opportunity to promulgate his denouncements of President Trump before statistically dissolving faster than Lilly Tomlin the in The Incredible Shrinking Woman.

By Super Tuesday, journalists will have more reason to cover the rantings of Vermin Supreme™ than Weld.

Thus far Weld is the sole candidate who has held a state or federal office to fight Trump in the primaries and likely will be the only.

Romney didn’t back up in the general election his hectoring bluster during the primaries and won’t in 2020 beyond sending out more “mean tweets” aimed at @realDonaldTrump.

Maryland Governor Larry Hogan is an establishment GOP fantasy that won’t be fulfilled.  Unlike Weld, Hogan has both a present and a future.

We will see if John Kasich leaves his newly discovered yoga mat or if Jeb Bush decides to further endanger his son’s political future in Texas.  I’m guessing no on both counts.

As of right now, the irrelevant Weld is going to have to work to earn that hashtagged “forever name” from President Trump.