Last week Chris Jacobs of the Pelican Institute published an op-ed at the Wall Street Journal which stirred up lots of folks on the right around Louisiana, and presumably elsewhere, over the prospect that among those nearly half-million new signups to Gov. John Bel Edwards’ Medicaid expansion package are a substantial number of people who formerly had private health insurance and have been put, willy-nilly, on the government dole.

It’s anecdotal, to be sure, but the easiest way to see how this would have happened would be that when Edwards decided to bite down on the Medicaid expansion hook, he made it very easy for small and mid-sized businesses in the state with less-than-highly-paid employees to just dump their company health insurance altogether, transferring the whole employee pool into the individual market and putting all the lower-paid people onto Medicaid. Extrapolating from initial Medicaid expansion signup figures, Jacobs estimates more than a third of the half-million people Edwards put on to the government health care dole were private insurance customers.

And from what we know, it might have been a lot more than just the lower-paid folks. A recent study found some 1,672 people making six figures nevertheless on the Medicaid rolls. How that could happen should be mind-boggling, but it’s really quite simple – the Louisiana Department of Health didn’t bother vetting Medicaid applicants for eligibility, they just more or less signed up everybody who showed up after dropping a seven-figure ad buy onto the state’s airwaves touting Medicaid as the secret to good health in Louisiana.

Three years later, with an election coming up, they’ve dumped 40,000 people off the Medicaid rolls in an attempt to show they’re really serious about trimming the fat – or more to the point they’re terrified that Ralph Abraham or Eddie Rispone will jump on the Medicaid issue and run TV spots with welfare Cadillacs and crooked-as-hell political cronies getting arrested for Medicaid fraud, of which there have been quite a few. Perhaps Edwards’ camp, and LDH’s secretary Rebekah Gee – who has been a fountain of dishonesty and sketchy, unethical behavior from Jump Street – believe that when those attacks come they’ll be better off for having been able to claim the problem of ineligible recipients has been addressed.

Except it’s not so simple, and this is where the credibility issues only deepen.

Why is the state’s Medicaid budget growing?

If you’ve booted 40,000 people out of the program because they’re ineligible, and your enrollment rolls are therefore down from what they were before, your budget ought to be less, not more. And yet this year’s Medicaid budget is $12.4 billion, out of an LDH budget of over $15 billion.

This may be a little bit “in the weeds,” but LDH puts out, at its website, monthly projections for the Medicaid program which appear as PDF files. You can find them here. Go and look at the last two, and on Page 5 of each you’ll find the enrollment numbers. 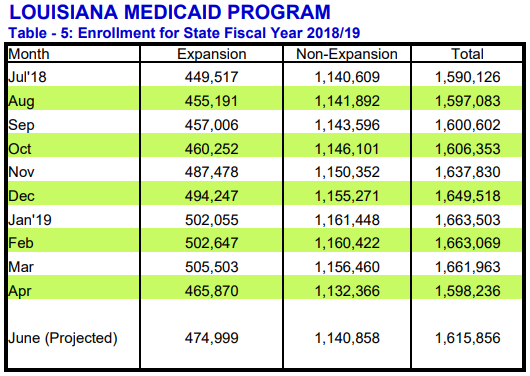 And here’s the chart for the May forecast which was published on Monday, as soon as the session ended… 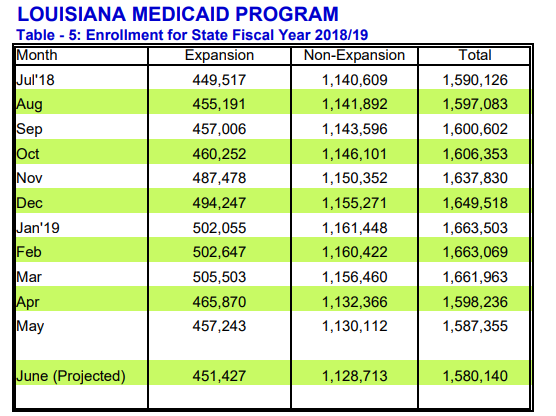 That’s a pretty wide swing, don’t you think? From one month to the next LDH is saying that Medicaid’s total enrollment, the hard numbers for which they had in April of 1,598,236 people, were going to 1,615,856 – that’s while the legislature was in session and processing LDH’s budget – to then projecting, as soon as the legislature went out of session the June number would be 1,580,140.

That’s 35,000 people who all of a sudden aren’t going to be on Medicaid but that the state legislators were told would be.

That isn’t an insignificant number.  And the legislature was told LDH needed the funding to cover them; now that the session is over and LDH got the budget it was looking for, the projections take a tumble. And most of that decline – about 23,000 – comes from the Medicaid expansion cohort – the legislature was told by LDH during the session it was expected that would increase, and then when there was pushback LDH admitted that was wrong. Now it’s a precipitous decline of 14,000 in the projections. This, after dumping 40,000 people who were found not to be eligible and taking credit for finally vetting Medicaid enrollees for eligibility (more on that below).

Something else those forecasts bring up is Uncompensated Care, which is the linchpin of Edwards’ argument that Medicaid expansion saves the state money. According to Edwards, Louisiana was going to save a bundle by signing up all these people for Medicaid because when somebody without health insurance goes to the hospital the federal government pays 60 percent of the freight and the state 40 percent, but that number jumps to 90-10 when that somebody is signed up for Medicaid.

There are lots of reasons that doesn’t actually work in real life – most notably among them that uninsured people don’t go to a doctor unless bone is sticking through the skin, because they can’t afford the medical bills, while Medicaid people don’t even have co-pays so they’ll show up at the emergency room (and not a doctor’s office, because most doctors don’t take Medicaid patients thanks to the horrendous reimbursement rates) for a case of athlete’s foot. Because why not? Somebody else is paying for it.

Real life is often unkind to lying politicians, and the numbers show it here.  Louisiana’s expenditure on Uncompensated Care is now forecast to be $1.05 billion. That’s more or less the same number it was before Edwards put a half-million more people on the Medicaid rolls. How is that possible when he’s claiming to have cut the uninsured rate in Louisiana in half?

Somebody’s lying. Either Medicaid expansion does exactly nothing to save Louisiana money on health care for the indigent, or it does nothing to provide any more health care for those people it’s supposed to cover. Or those numbers are pure bovine scatology put out to deceive people and hide where the money is actually going.

What we don’t have is an accounting for how much money was wasted by signing up people who weren’t eligible. A number we were given by a legislator involved with the appropriations process is that each Medicaid signup costs the state $400 a month just to process it. So carrying 40,000 people who weren’t eligible for three years before booting them off to make it look like your enrollment process wasn’t a joke would cost Louisiana $576 million.

That’s $576 million absolutely wasted, which based on these numbers didn’t produce any net savings to the people of Louisiana whatsoever. It’s money not spent on flyover ramps accessing the new $1.2 billion airport in New Orleans which can’t open until after the election for fear of the traffic nightmare that will ensue. It’s a bridge not built across the Mississippi south of downtown Baton Rouge. It’s the I-10 bridge in Lake Charles not being rebuilt before it falls into the lake. It’s a multitude of drainage projects not being built which would save our residents billions of dollars in flood damage.

All of those things which could have been done, and needed to have been done, aren’t done. And John Bel Edwards and Rebekah Gee set a half-billion dollars on fire by signing up ineligible people for Medicaid.

Oh, but Edwards thinks he deserves credit for stopping the bleeding he caused. Sen. John Kennedy has been beating this drum for years and is now trying to get a federal law passed that would do something about stopping states like the one he represents from signing up ineligible people to get welfare health care, and here was Edwards’ response to that…

Governor Edwards says an update and upgrade of the Department of Health’s computer system revealed a number of ineligible participants, subsequently booted from the program.

It amounts to $400 million in savings.

“When you identify those individuals, that’s proof that the system is working, not that there’s widespread fraud,” said Gov. Edwards

Yeah, right. He’s saving $400 million going forward, he says, but he’s not reclaiming the $576 million, or whatever the number is, that’s already been set ablaze. And he wants you to believe this is proof he’s a capable steward of your tax dollars.

Pretty brazen, you might say. You’re aware of the fact that the Legislative Auditor has filed suit against LDH for refusing to give up its data on this very question of eligibility, right? Surely nobody is engaged in a coverup until after the election. Surely.

If you still can’t see how slippery these people are, let’s go back to April of 2016. This was the Times-Picayune on April 6…

How many people are expected to enroll?

DHH is projecting 375,000 people will enroll over the course of the next fiscal year, which begins July 1.

And here’s something from the Baton Rouge Advocate yesterday…

Gee said the state has always expected about 470,000 people would benefit from the Medicaid expansion.

That’s what’s known as a lie. A pretty bald-faced, provable one.

So when LDH claims that nobody jumped off private insurance and that Jacobs’ WSJ op-ed is all wet and that only two percent of the Medicaid expansion people previously had private insurance (as opposed to the Pelican Institute’s study which says the number is as high as 35 percent), can you really give them a shred of credence for such statements?