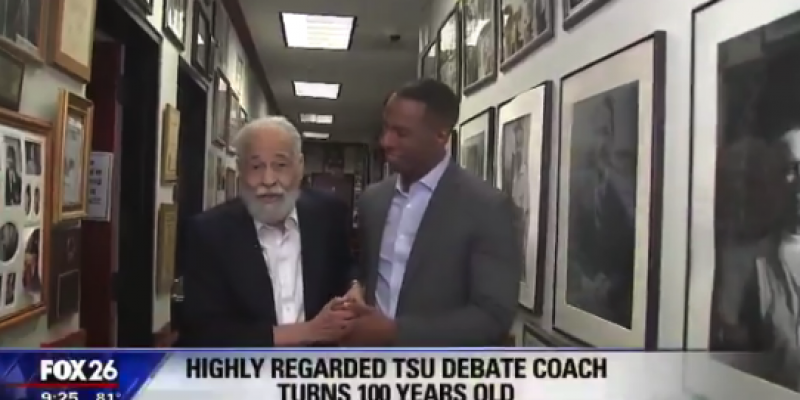 born in 1919 in Richmond, Virginia, where he spent his childhood and attended college. After receiving countless degrees from universities all across the world, Dr. Freeman came to Houston, Texas and founded the TSU Debate Team in 1949.

Happy birthday, Dr. Thomas F. Freeman! 100 years ago today a legend was born. Thank you for your service to Texas Southern University. We hope you have a fantastic day. #TXSU #TSUProud pic.twitter.com/gvsc9MU2vX

Texas Southern University (TSU) professor and world-renowned Debate Team head coach emeritus, Dr. Thomas F. Freeman, trained thousands of students to compete in speaking contests around the world– for 70 years. His students have beaten competitors from Harvard and the University of Chicago.

Every surface of his wall is covered with photographs and awards with shelves full of trophies. He told the local news, “A young man asked me and I told him to count them and he stopped at 2,000.”

Students met to give him another award, and celebrate his birthday again this year:

Dr. Freeman also served as the pastor of Mt. Horem Baptist Church for more than 67 years. He was also the Founding Dean of TSU’s Honors College, which is named in his honor.

The Smithsonian National Museum of African American History and Culture (NMAAHC) on the National Mall in Washington, D.C., displays Dr. Freeman and his award-winning TSU Debate Team. The display features their awards and activities and references Freeman’s role in training actors for the movie, “The Great Debaters.”

The display also includes the trophy won by TSU alumnae Congresswoman Barbara Jordan and TSU alumnus and former TSU Thurgood Marshall School of Law professor Otis King (both are deceased) when they integrated forensics in the South, at Baylor University in 1957.